How can everyday sounds be translated into a score? – Interview with John Moran (US/DE) about "everyone"

On 17.01. the latest production “everyone” by John Moran (US/DE) celebrates its premiere in Dresden. In advance we asked the artist some questions about his work:

What inspired you to “everyone”?

I wanted to create one more work before I die, which – I hoped – would perfectly describe a style of music and theater I’ve spent my life devoted to. I say this with a sense of humor, as I think I could say the same for every piece I’ve written over the last 30 years. But I did create the work with this attitude. I would say that the work is a personal reflection on death, and at the same time, an overview of my musical/theatrical techniques. What we create in “everyone” are theatrical overviews of different lives, from birth to death, and the fight against gravity. These are presented as musical compositions, however.

You write that “everyone” consists of precise sequences of gestures and movements performed by the performers in complete synchrony with previously recorded voices and sounds. What exactly can the audience imagine?

The audience will first find their internal rhythms or their “rate of thought” being aligned to a shared tempo. This is something the audience doesn’t really notice as it is happening, and there are a lot of technical aspects which go into creating this effect, but many people describe it as a feeling of being “stoned”. After we are in that kind of hypnotic state, together, whatever we examine on the stage will then seem to have a greater sense of meaning. What is really happening, though, is that the techniques of the work recreate the sensation of personal memory. Creating this effect does require that performers move in tight synchronization to the soundtrack, as part of that illusion. And I think that audiences will find these dancers – Jule Oeft, Kristin Mente and Yamile Navarro – so talented at the performing the technique, they will often forget it is happening.

From how much material on sound recordings was finally filtered out “everyone”?

“everyone”, like all my works, is created out of thousands of short sound samples which are manipulated into sounding as if one, continuous recording. But generally, every footstep, word or even breath of a character being presented, is a separate recording. These are sounds I’ve cataloged over decades now, so when I need a character or situation to show a specific action, I can assemble that out of the right, individual sounds, instead of searching for a complete recording with those qualities. For example, when performers walk, I have thousands of different footsteps to choose from. After that I have many different kind of floors and surfaces which also make noise as a character moves. Doors, birds, cars of all different kinds, and in all kinds of distances from the microphone. I arrange these sounds on a keyboard, so that I can then learn to play them as musical phrases. So I’m describing realistic events, and making theater in that way, but I’m doing this as a composer.

How do you translate everyday sounds into a musical partitur?

At the beginning of my career in the 1980’s, I learned from composers like Steve Reich and his early tape-loop experiments, that all sounds have rhythm and pitch. A colleague of Reich’s, Phil Glass, was my mentor in New York, and he was also known for extended periods of repetition, although not with sound recordings but instrumental phrases. What I wanted to do, was to take those structural ideas, and apply them not only to a sound, or musical pattern, but to a virtual environment. And in these days, at the start of my career, personal computers did not exist. But I was striving for what I wanted to define as virtual reality, before that term had been invented. My stronger influence as a composer had been a childhood study of Disney animation, and a love for the rides at Disneyland. And so I spend my time organizing hundreds of individual sounds to define specific locations and situations which I imagine. And then put all those sounds into sequences on a tempo, so that the events I’m creating are both realistic in what they describe, theatrically, but also a musical composition. These are rhythms and melodies being presented, but they define realistic events. Since performers – who behave as mimes – learn these sound cues as a musical partiture and provide the missing visual of what the sounds describe, this becomes a form of dance, as well. So it is a form of music, theater and dance in which all these art forms are created as one expression. 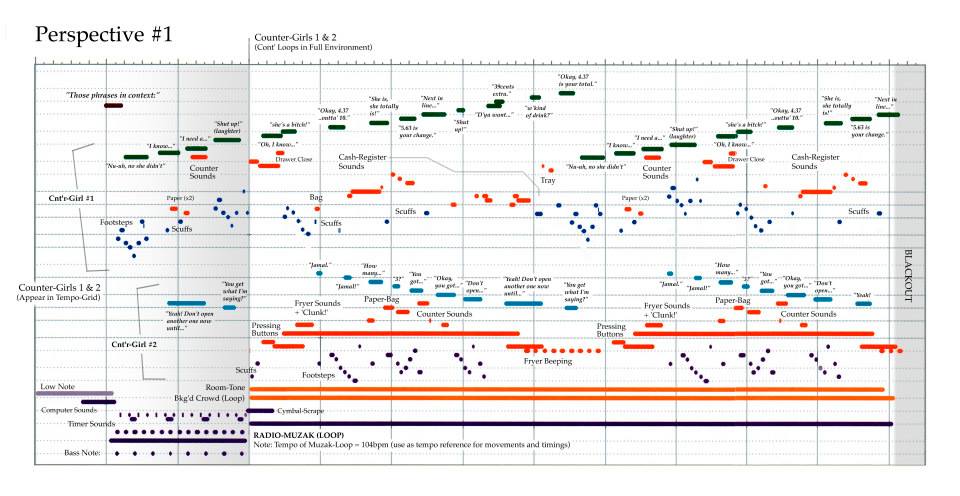 How did you come to Dresden as a New Yorker? And what has Dresden, what New York has to offer?

The first time I came to Dresden was from Bangkok, where I used to keep a music-studio for in between touring. And the 2nd time I came to Dresden was from Glasgow, Scotland. People often call me a New Yorker, because the first 20 years of my career were there. But I left America in 2004 when I was offered an artist-in-residence program for the city of Paris. After two years there, I returned to New York again for a short time, but felt that capitalism had simply become something I didn’t enjoy, and found that in Europe and UK people understood what I was doing more. So I left America again, in order to start a nomadic life. I just wanted freedom from America. For the next 10 years I went from one country to another every month and lived and worked in hotels or whatever was offered to me as an artistic residence. So I traveled all over the world and had no security to fall back on at first – that was very exciting for some time. However, after 10 years of living like this, I was exhausted and decided to try out an experiment I had never done before and just stopped somewhere to see what would happen. I had met a group of people at Zentralwerk Dresden who I liked very much and had found some very close friends, like Heiko Oeft. Dresden was another kind of experiment that I enjoyed very much. I wanted artistic freedom and good friendships and I found these things in Dresden. When you mention New York today, I think only of commercialism.