Transit Monumental stages an objet trouvé of 10 metres in length and 500 kilograms in weight as a monument in order to get close to the forms of representation and utopias of a European nation. Inspired by the aging tradition of state gifts and with the self-imposed task of offering this monument to various representative personalities and groups in Poland, the Giessen group K.A.U. and the Polish director Małgorzata Wdowik travel through various regions from Munich to Warsaw. Seven road movie episodes and a live recording of the congress tell the story.

K.A.U. are Philipp Bergmann (DE), Thea Reifler (CH) and Matthias Schönijahn (DE). They work in theatre, film, opera and the intersections of these formats. K.A.U.&Wdowik is a collaboration between K.A.U. and the Polish director Małgorzata Wdowik. In 2015 they developed the project TRANSIT MONUMENTAL – Droga Niepodległości, which was produced by the SPIELART-Festival Munich and was also shown in the Sophiensaele Berlin and as a lecture performance in the Theaterdiscounter Berlin. 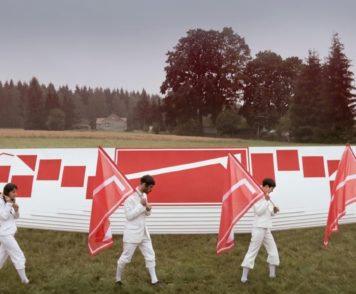