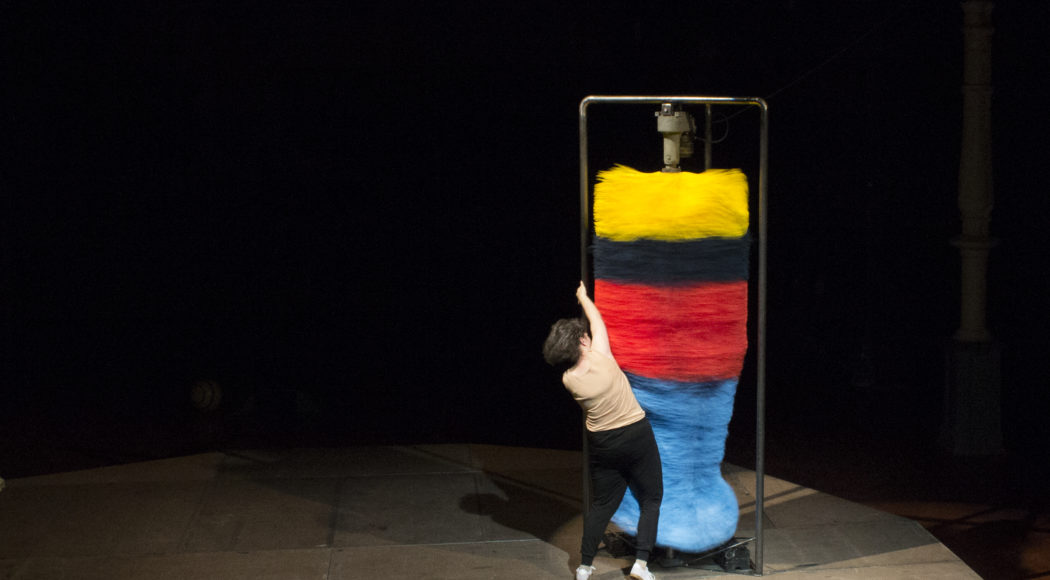 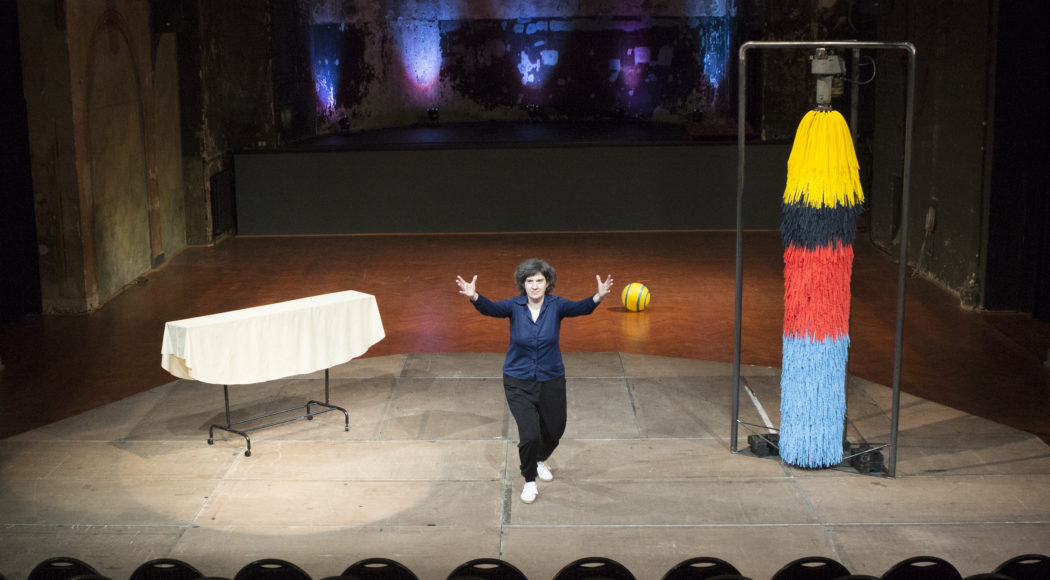 The solo “The sawed up woman” is a play with illusion. The fact that a woman, as in Horace Goldin’s magic trick “Sawing a woman in a half” (1921), is sawed into the lower and upper abdomen and then put back together again is combined here with social projections and painful experiences of female bodies that have not lost their virulence to this day. Using fictional and real stories, Angelika Waniek brings images of (female) bodies and their design possibilities onto the stage. Among other things, the audience is confronted with the tortures that are carried out on a body and is put in the delicate position of being a jointly responsible part of the whole. In a setting in which the auditorium merges seamlessly into the stage area, she negotiates the two themes of “being a body and being exposed to social processes” and “media witnessing”. She uses Waniek’s storytelling style, a narrative in object and language images, and radically turns the magic trick of “sawing a woman in half” into reality: On stage, the woman is the magician who makes the invisible visible in an interaction of objects, body and language.

Angelika Waniek (*1975) lives and works as a performer in Leipzig. She studied media art at the Academy of Visual Arts in Leipzig and free art at the Muthesius Academy of Art in Kiel. Since the winter semester 2014/2015 she has been teaching at the Academy of Visual Arts Leipzig in the department of media art. In her solo performances, she analyses existing cultural and historical narratives connected to the respective performance and exhibition venues and retells them in a “Waniek’s” storytelling manner. In her work in the context of the visual arts, she overlaps with actors from the fields of literature, dance and theatre. Together with Martina Hefter and Ulrike Feibig she is part of the Leipzig performance collective Pik7. In 2016 the Free State of Saxony purchased performances for the first time through the State Cultural Foundation, including three by Angelika Waniek.

Doris Dziersk (*1973) lives and works in Leipzig. She studied fine arts in London and works as a visual artist and stage designer. Her works are characterized by a high level of context awareness: the location and theme of the work determine the medium and form to a large extent. She designs stage sets, installations and videos. She has collaborated with the choreographers and directors Meg Stuart, Enrico Stolzenburg, Peter Kastenmüller, Matthaei&Konsorten, Gesine Danckwart, Doublelucky and the Berliner Festspiele. She developed installations for X Apartments in Berlin and Caracas, for Steirischer Herbst, the C 60 Collaboratorium, at the invitation of raumlabor berlin and in collaboration with the visual artist Anke Philipp, with whom she developed, among other things, the redesign of the Leipzig Theatre Residence under the new direction of Thomas Frank. Doris Dziersk was awarded the Hamburg Rolf Mares Prize for her work in 2009 and the New York Bessie Award in 2012.