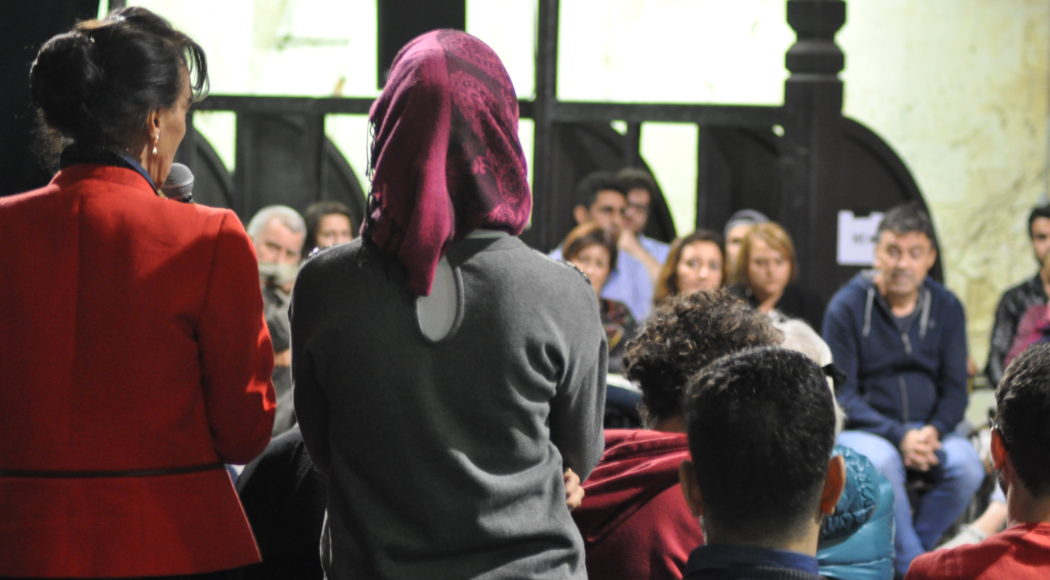 ACTIONS is a stage and action project of the Dutch, Swiss and French artists* Yan Duyvendak, Nataly Sugnaux and Nicolas Cilins. The basic idea is the concrete negotiation of an urgent problem in the city in connection with the subject of migration in the form of a theatrical assembly. The author* team and the HELLERAU team analyse the special conditions in Dresden in the areas of migration, coexistence and work through research in advance. Specialists* working in these fields will be interviewed. The script for a unique theatre performance is created from the material. ACTIONS wants to offer new perspectives and help to find concrete solutions in a complex field. ACTIONS is a documentary theatre and social forum on the border between art, politics and action.

Nicolas Cilins: The working method for the ACTIONS project is collective. How important is the idea of collaborative work for this project?

Yan Duyvendak: ACTIONS is a concept that moves between performance, theatre and documentation. It’s a discussion format that uses documentary theatre tools and is based on a script. What is important is the intensive preparatory process with the specialists from the city. The performance ACTIONS lasts no longer than one hour, the discussion of the evening is staged, follows a certain dramaturgy, and it must be ensured that each participant* does not leave his own role during the discussion: Citizens*, politicians*, volunteers, authors* and fugitives remain themselves.

What are the main ideological, social and political issues raised by ACTIONS?

The problems associated with the reception of refugees are not a matter for individual states, legislation, the commitment of civil society or even a question of resources. This is what puts us in a strange and hopeless situation. And in this situation, the project opens gaps. Thanks to the different events and experiences within the performance ACTIONS that has taken place so far in Italy, Greece, France and Switzerland, we can say that in every country, every city, every municipality everything is different: the laws, their interpretations, rules, material limitations, stories and obligations of each individual. Perhaps, despite all the differences, the human factor alone cannot be reduced. ACTIONS works on a border: that of activism.

What preliminary work is taking place and how are the different actors of the project brought together?

The special feature of ACTIONS as a play is that it is rewritten with each performance. The various participants discuss the most urgent local issues. This urgency is defined in advance with the active local partners. We conduct interviews with the various participants together with one or two journalists. Then we write the script, which should capture the essence of the problem. We discuss this draft again with the participants* and then perform the staged discussion in public with the final script.

How has this structure developed between interview protocol and documentary theatre?

We have built the work empirically and adapted the process to the sensitivities and special needs of each person. At the same time, we try to identify and filter out the most important problems. It is a balancing act, and at this point the format is interesting. It avoids heated debates because everything has been noted down in advance and everyone has agreed in advance. We have of course thought about this structure and such a structure is only possible through many approximations. Despite the exact procedures and format, failure during the performance is also possible. It is an exciting, extremely complex work because it takes place at the same time on the conceptual, political, social, human and formal level.

What role does the medium of theatre play in the face of political, social and real questions?

Just because something real is happening here doesn’t mean it’s the representation of reality. That is the exciting thing about this form of performance. As far as the medium “theatre” is concerned, we try to find something archaic, something that connects us with politics.

ACTIONS is rewritten with every performance.

“Work, education and training are essential systems of social integration and inclusion, which serve not only to secure livelihoods, but also to promote participation in society as a whole. It is therefore also essential for migrants* and refugees to be actively involved in these areas and to contribute their share. The framework conditions for access to prerequisites such as language acquisition, catch-up education and other integration opportunities are strongly influenced by the residence status and country of origin of refugees. In addition to being excluded from “uncertain” residence status (during their stay in so-called anchor centres or initial reception facilities, during the asylum procedure or in the case of “toleration”), migrant women are often unable to work in occupations acquired in their home country. Support by the employment services is not granted because the length of stay stated in the papers is too short or because the conditions for participation do not “fit” or only “fit” on paper to this target group. Far too often complex legal situations still present considerable obstacles to fair participation in good gainful employment in Germany and thus deny fugitives the human right to work. Ultimately, there is also often a lack of support from people in the surrounding area who could provide tutoring or assistance in coping with the demands of vocational school, during vocational training or when graduating from school – with an interrupted educational biography. Andre Kostov, project coordinator for technical and content-related programme support for labour market mentors in Saxony at the Saxon Refugee Council and partner of HELLERAU at ACTIONS

Tue 05.11.2019 20:00
ACTIONS
Yan Duyvendak, Nicolas Cilins and Nataly Sugnaux (CH)
Documentary Theatre/Performance
German Premiere
Supported by the Kulturstiftung des Freistaates Sachsen. This measure is co-financed by tax money on the basis of the budget decided by the Saxon state parliament.

Abridged and edited version; the complete interview was published on 21.06.2019 on www.maculture.fr