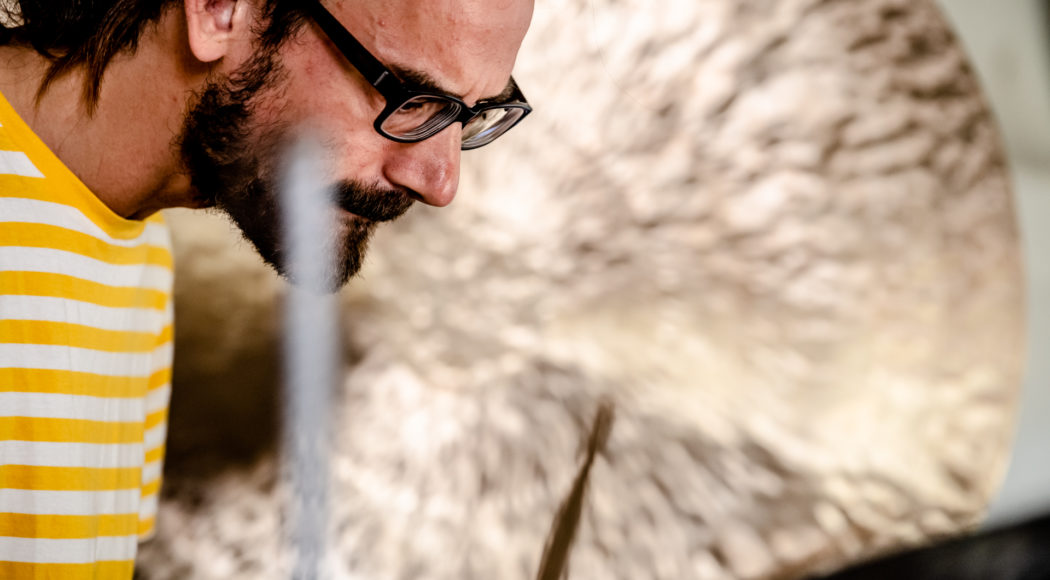 Rosalind and Wieland have been working together since 2010 and meet regularly for joint improvisational performances in Berlin spaces such as the Mime Centrum, Urbanraum and in the venues of MusikTanzNull30. This is the first time the duo has performed together since Rosalind’s move to Saxony in 2016. Parkour offers them the opportunity to share their practice in movement and sound with an audience and to bring together the overlapping approaches in their approach to improvisation. These include the perception and inclusion of non-human material like trees and cymbals.

Rosalind Masson graduated from London Contemporary Dance school in 2006 and received a master’s degree in media art from DJCAD in 2008. In 2009 she worked at Movement Research in New York. From 2008 to 2013 she worked as a performer and choreographer in the fields of rock, folk and contemporary music and as a performer in the work of visual artists, dance filmmakers and choreographers in Germany, the UK and the USA. In 2010 she began producing her own choreographic work under the title Anima(l)[us]. She directed and produced nine live works and five screen works that have been shown internationally. In 2014 she joined the Laborgras collective in Berlin, where she created and performed four new works under the title “The Renaissance Project”. Since 2019 she has been deputy chair of the Neisse Centre for Contemporary Arts e.V. and continues her freelance work as choreographer, collaborator, teacher and performer in Görlitz, Saxony.

Wieland Möller (*1982) studied percussion at the Rotterdam Conservatory, the Rhythmic Conservatory Copenhagen, the Berklee College of Music and in New York. He received scholarships from Berklee College and the Goethe Institute as well as from the Berlin Senate. He works as a drummer, composer and performer in the field of jazz, improvised music, free theatre and contemporary dance. Significant for his work are sounds of the environment and the process of creating music pieces inspired by them. Working with dance fascinates him to make sounds visually perceptible and movement audible. Wieland plays with international bands such as the jazz trio ATOS, his Akvariet Trio and the Sander Baan Quartet. He has performed at the Buenos Aires Jazz Festival, Cordoba Jazz Festival, Jazz International Rotterdam and North Sea Jazz Festival, among others, and toured the USA; the Netherlands, Poland, Portugal, Argentina and Iceland. Among others he played with Klaas Hekman, Eric Wyatt, Arild Andersen, Shai Maestro, Markus Stockhausen. As composer and performer Wieland Möller works in various dance and theatre productions. He recently worked as a composer at the Junge Deutsche Oper Berlin and was involved in the performance project of the New York choreographer Okwui Okpokwasili at the 2018 Biennale. He also worked at the Reykjavik Dance Festival, Danceworks Rotterdam, with the Yet Company and Perform(d)ance Stralsund. He has performed with Julyen Hamilton and works with Ingo Reulecke, among others.