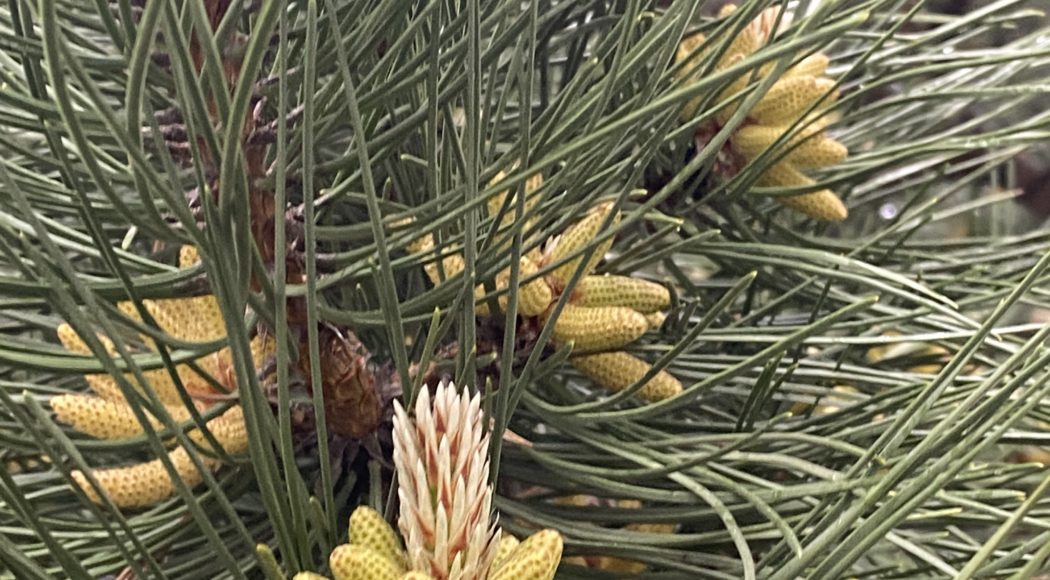 Artists research, test, reject, create, present. In cooperation with the Fond Darstellende Künste, HELLERAU provides space and time for 95 #TakeCareResidencies. The writer and filmmaker Jovana Reisinger and the trio “Patterns of Paradyze” with Kathrin Dröppelmann, Margarete Kiss, Leon Lechner provide insights into their research process on the following pages.

By Jovana Reisinger, whose research deals with the concept of home and anti-home art (version of 31 May 2021).

L.L. once sent me a photo of himself on a mountain, surrounded by mountain pines, low-hanging clouds and other mountain peaks. His hair was tied in cute braids and he made a cute face while coyly blinking at the camera. I found him very attractive, not at all a catalogue nature boy. This portrait came abruptly with a line that made me think of mothers and photo albums from the 1990s (“Am riding high”). Still, this man seemed made for the summit (for all summits!) and I immediately replied, “You look good in the landscape”. And although I wrote him that, he never went hiking with me (whew!). Instead, L.B. and I took a rental car and drove out of the city, into the mountains. The excitement of the impending nature experience made us giggle delightedly and a pop song playlist fuelled the mood further. Fortunately, it had been raining steadily for days and the weather only promised to improve from midday onwards, so we could confidently sleep in and relax (hearty lunch!) before setting off on the hike (cf.: “The way is the goal”, “Even the longest path begins with the first step”). L.B.’s blue Patagonia down jacket not only nestled elegantly into the landscape of the rushing mountain river we were hiking upstream, but blended quite smoothly into the mass of other thin, dark blue down jackets that started with us from the hikers’ car park that was actually so signposted – which amused us as much as it repelled us. My aunt’s discarded hiking clothes suggested without a doubt that I was not only a regular tourer (complete misjudgement), but also that I value quality and brands – and have the necessary capital (No!). So I passed for a pro. Unfortunately it was pleasantly cool, so the trousers with all the zips didn’t come into play, which would have shown me to be one with a sense of permanently changing weather patterns. I like the idea of going out in a pair of long trousers, zipping up in between at knee level and then at the thighs and unzipping the lower parts each time. Three-pants-in-one I think is great. I love practical things, but I especially like the feeling of security that (high-tech) functional clothing gives off. However, the promise of being equipped for any situation (survival mode: on) must be worn with the attitude of never being ashamed of being overequipped (motto: “forewarned is forearmed”). I’m annoyed by the constant greeting each other on the mountain, which I do either over-committedly or furtively mumbling – which in the end will probably always out me as an insecure city dweller. For a while I stood on a hill looking at the people happily consuming at the hut in their survival couture style, happily chatting to each other as if they were all known to each other. L.B. was almost impossible to spot with his outfit and at some point joined me at the vantage point with a beer, which made me happy – because such a drink would taste especially delicious after such an effort. Not only did it turn out that for most of our companions this pretty hut was the end of the hike (nice destination!), but also that the rest of the time the mountain river had to be crossed again and again to reach the waterfalls in the gorge. The initial uncertainty gave way to an unexpected sense of adventure and we jumped from stone to stone, nimbly finding our way across the icy water (only one foot landed in it, but stayed dry thanks to the high quality shoes, thank you auntie). I felt my heart pounding and liked to be faster than L.B. on the other bank sometimes, but he usually held out his hand to help me over tricky passages. On this day, the clouds were racing as fast as the river was rushing along and the last few metres we thought we were going to run into a terrible thunderstorm (here we are in nature for once!) but kept going. But then, just as we were climbing onto a rock in front of the waterfall to eat our snack, the sun broke through and the surroundings showed themselves in the most beautiful kitsch. The rocks, caves, pines, mountain flowers, medicinal herbs and the roaring sound made me think that I urgently needed to move to a mountain village to be truly happy. I took many photos. Overwhelmed and happy. Totally high. Lonely in the gorge. We had lost the others. All of nature just for us. I sent one of them to L.L. He replied: You are beautiful in the landscape. And I knew it was true. Because this one was perfect. L.B. laughed and I didn’t know why. I laughed and remembered a moment in the alpine part of the botanical garden in Berlin when L.K. and I found the most beautiful tree (teardrop pine) and vowed to stay together forever. Nature triggers the funniest and finest feelings in us. Pining, I thought: Dear Drama, I’m all in! Show me what you got. And L.L. has already cancelled the next walking day. #TakeCareResidencies is a funding programme of the Performing Arts Fund within the framework of NEUSTART KULTUR. Realised by the Alliance of International Production Houses, the association of the 7 largest institutions for the independent performing arts in Germany, funded by the Federal Government for Culture and the Media.

We are researching heterotopic designs for inter-specific communication in contemporary gardens against the background of resistant practices of animals, plants and (non-)humans. What forms of a common language develop when humans no longer determine? Where can examples of this be found in the gardens of Hellerau? Starting from the concept of paradise, we develop a multifaceted methodology consisting of reading theory together, walks and fence talks in Hellerau. We will use the HELLERAU cultural garden to make our growing knowledge and exchange visible: Through the performative act of planting a field of nettles, we want to illustrate a parallel growth process to our thoughts. Not in the sense of a finished product or with a claim of objectivity, rather we are interested in questioning aesthetic practice for its knowledge: what kind of knowledge can art produce? Collectively, we negotiate ourselves and our approach. Negotiating in this sense means listening to each other, enduring, caring, discussing, arguing, giving in and being able to laugh about it. Private property vs. other forms of property, community land trust, cooperative,…

Garden A garden is a demarcated piece of land in which plants or animals are cultivated by humans and thus cared for (cultivated). Unlike parks, gardens are usually private areas. Who are the owners? John Locke says: “The labour of his body and the work of his hands are, we may say, in a proper sense his property. Whatever, therefore, he removes from the state which nature has provided and left it in, he has mixed with his labour, and added to it something of his own. He has thus made it his own.” (TTG II 27, 216 f., John Locke: Two treatises of Government, England, 1689). Garden as shelter The garden as a space of control or as a community of relationships?

Vegetation communities (non-)human/animal/nature Vegetation community describes the type of plant stand that has a very similar species composition. It arises because only a specific group of plant species can settle and persist under certain site conditions. The species are interrelated. Factors for coexistence are climate, mutual support and also competition. If the site factors change, the plant communities change into others. This process is called succession.

Paradise The word “paradise” comes from ancient Iranian and means “enclosure”. “Chortos”, from which “garden” is derived, is Indo-European and means a fenced, sheltered place. Who is allowed in and who is not?

Fence The fence can form a boundary to the outside or enclose an area. In the case of the garden, it protects a man-made space, a living space that explicitly excludes and includes people as well as non-people. Our interest in a wall led to a conversation with the owner. She explained to us why this wall was built in GDR times: it was to keep the exhaust fumes of the Trabants and Wartburgs that drove up the street recently out of the pie plate.

Intervention: field of nettles We build a 7-metre fence of weeds. “Unkraut” in German: the “un-” always has the potential to be resistant and important. The nettle and its rhizomes grow and develop in parallel with us and our knowledge, networking and branching out. The first month has passed and our fence is not growing. Perhaps because the nettle does not want to be instrumentalised by us to build the fence? We don’t know.

“If the Earth is Planet Garden [Gilles Clément] we should all be gardeners […]” Maria Paula Diogo, Ana Simões, Ana Duarte Rodrigues and Davide Scarso, Gardens and Human Agency in the Anthropocene, p.96,.l. 8, First published 2019 by Routledge