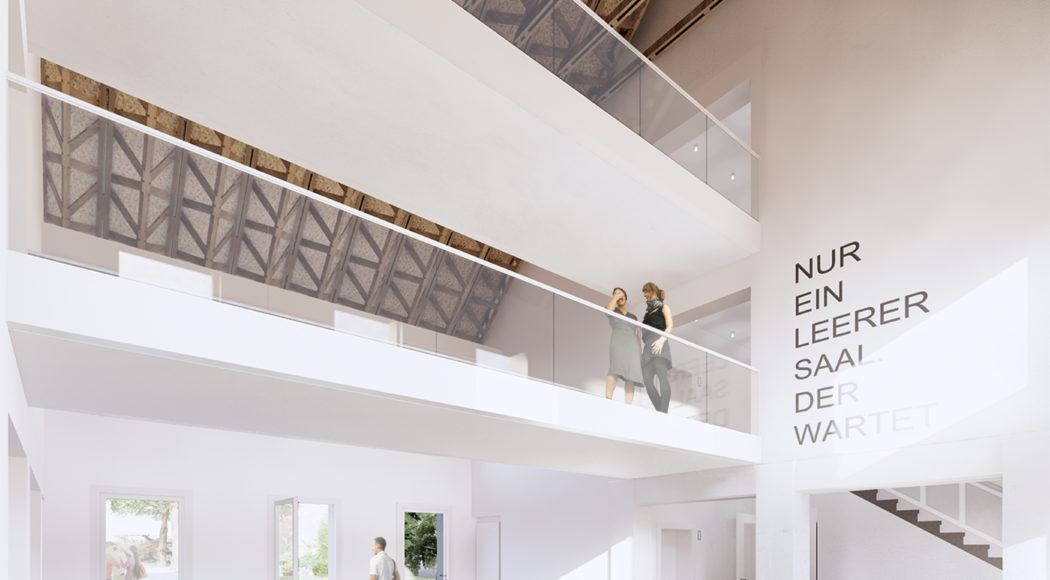 The east wing at the Festspielhaus is brought back to life

On 16 November 2018, Minister of the Interior Prof. Dr. Roland Wöller and Dresden’s Lord Mayor Dirk Hilbert signed an urban development agreement in HELLERAU. With this, the Free State held out the prospect of funding for the state capital from the federal-state programme “Urban Planning Monument Protection”. The funds will be used for the complex renovation and conversion of the east wing of the Festspielhaus Hellerau as well as for the design of the open spaces on the site, including the inner courtyard. As a centre for contemporary art with a clear focus on dance, music and theatre, HELLERAU is one of the leading centres for contemporary performing arts in Germany. To welcome artists from all over the world, the former East Barracks, a listed building on the festival grounds, is now being converted into a hostel and rehearsal centre. On this page we will keep you regularly informed about the progress of the conversion. Follow the development of the East Wing on the grounds of HELLERAU – European Centre for the Arts.

The former narrow staircase in the center of the east wing was transformed into a large, bright space in October. By removing the ceiling and walls on the ground floor, the foyer now extends over all floors and provides a view of the original roof structure with its listed Kroher trusses. The upper of the two bridges that will connect the two halves of the building has already been installed and all of the foyer’s exterior wall openings have been made. On the roof, the final built-in components were installed in October. The facade plaster on the two gable ends of the building could be preserved and was restored. The plaster work on the east facade, which had already begun in September, was completed, including painting, in October. The plaster work on the west side will follow in November. 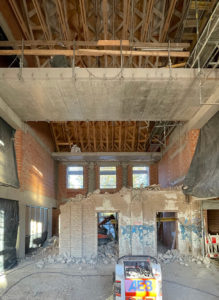 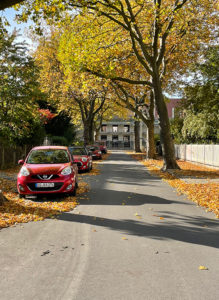 After completion of the east wing conversion, a foyer extending over all floors in the middle of the building will reconnect Gartenstadt Hellerau with the festival area. The current progress of construction already shows this design idea on a small scale. On the ground floor of the foyer, the opening to Heinrich-Tessenow-Weg is currently being created by enlarging the window openings into door openings. On the upper floor of the foyer, the ceiling has been removed. There, the special roof structure is already visible in all its glory. The roofers completed their work in September. Above the studio stage, the roller floor with cable grommets for the stage equipment is currently being installed. 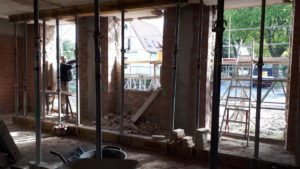 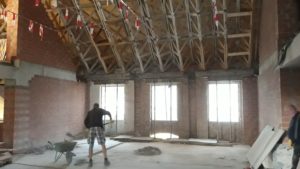 Following the completion of the shell of the rehearsal studio in May, the shell of the studio stage is now complete. For this hall, the steel truss was first erected in the roof, then the ceiling above the 1st floor was suspended from it, and then the load-bearing walls on the 1st floor, the ceiling above the ground floor and the load-bearing walls on the ground floor were removed. With a total length of seven window axes, the studio stage is the largest room in the east wing of the festival area. In August, the roof was further covered and the interior plaster work in the rehearsal studio was completed. In the artists’ flats and the kitchen, the finishing work has begun with the erection of the drywall and the installation of the technical building equipment. 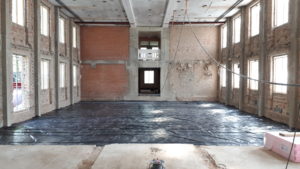 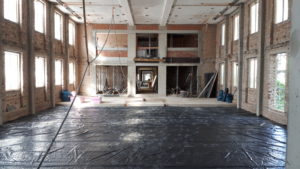 With the completion of the 14 dormer windows, the structural work on the east wing of the Festspielhaus Hellerau is now largely complete. Building mayor Stephan Kühn took this milestone as an opportunity to invite all those involved in the project to the topping-out ceremony on 18 July 2022. Intendant Carena Schlewitt symbolically hammered in the last nail and carpenter Jan-Philipp Geßner read out the topping-out speech. In the coming weeks – in addition to the ongoing structural strengthening and gutting work in the studio stage – the roof will be covered and the plaster on the north façade restored. 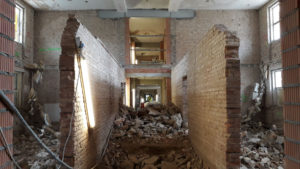 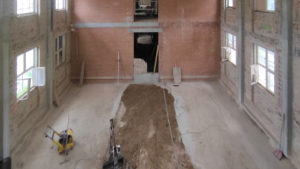 The time has come! The first of the two large halls of the east wing, where rehearsals and performances will take place from 2024, has been completed in its raw form. In May, the ceiling and the last remaining walls on the ground floor were removed – now the space is lit via a total of 16 windows on two levels in four building axes. The assembly of the steel trusses above the second hall, the studio stage, has also been completed. Now the demolition of the walls and ceilings will follow. With a length of seven building axes, this hall will be almost twice as large as the rehearsal studio. 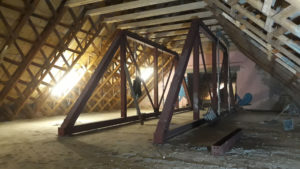 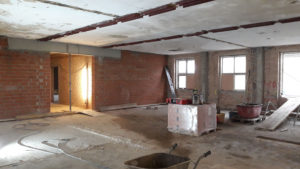 The construction progress in April already gives an idea of the future dimensions of the new rehearsal studio in the east wing. After the new lattice girders in the attic had already been erected at the beginning of the month, the ceiling underneath could be suspended from them. Freed from their load, the load-bearing walls on the 1st floor were then removed. The entire width of the east wing can now be experienced for the first time. When the ceiling and the load-bearing walls of the ground floor are also removed in the coming weeks, the rehearsal studio will be finished in its raw form. Parallel to this, the new steel trusses of the second large hall, the studio stage, are being built. 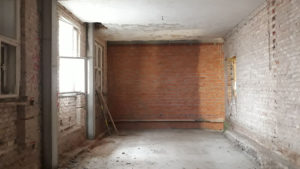 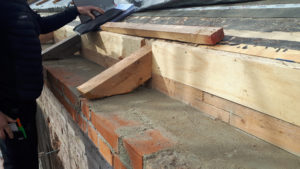 The new interior walls for the two large halls, which extend over two stories, are now being built on the foundations constructed in February and March. In order to be able to bear additional loads, the exterior walls of the east wing are being reinforced from the inside with wall pillars made of reinforced concrete. In April, assembly and erection of the new steel trusses for the test studio will begin. The individual parts of these trusses have already been delivered and lifted into the roof space of the building. Nesting opportunities for bats and building-dwelling birds are being created along the entire eaves length of the roof, and an entire bat roost is being created in the cold roof on the north side. 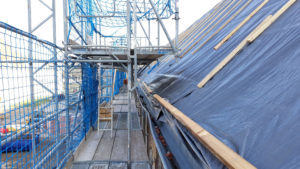 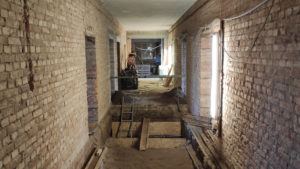 With the demolition of the screed in the attic, the demolition work on the east wing is now almost complete. The roof tiles have also been completely removed in the meantime and the roof is now temporarily protected against the weather by a tarpaulin.
However, the most exciting changes are currently taking place on the ground floor and in the basement. Everything is being prepared there so that in the coming months the floor ceilings and load-bearing interior walls can be removed in the area of the new “rehearsal studio” and “studio stage” rooms, which are being built to the left and right of the foyer respectively. The ceilings of these two large two-storey rooms will in future be suspended from steel trusses resting on newly constructed load-bearing walls. New foundations are currently being built for these walls or the existing foundations are being reinforced. 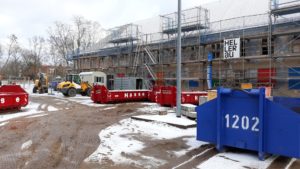 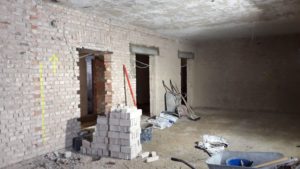 The first snow fell just in time for Christmas, covering the roof of the now scaffolded building with a delicate white. In the new year, demolition work inside the east wing continues to progress, filling the huge blue and red containers in front of the west façade with construction debris. The door openings of the load-bearing interior walls are being adapted to the new planning and, if necessary, reinforced in the lintel area. On the outside, roofers have begun to remove the roof tiles. These will be stored and reinstalled after the installation of the new dormers and the application of the insulation. 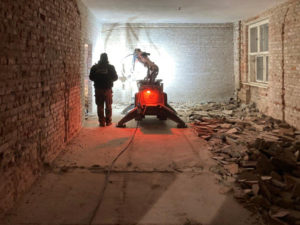 There is a lot of noise and dust in the east wing of the Festspielhaus. The demolition work that began in the central foyer in October is now taking place on all levels of the house. Before the new rooms are created, the east wing will first be completely restored to its shell condition, which means: all non-load-bearing walls will be removed and the plaster surfaces on the interior walls and ceilings as well as the floor superstructures will be taken down so that only the load-bearing elements and layers remain.

At the moment, three companies are working simultaneously on the site (technical development, light demolition and structural demolition). BAUHAUF GmbH is providing the main construction work, i.e. most of the demolition work, and will subsequently also carry out the steel construction and carpentry work. The demolition work on the upper floors of the east wing will extend into the spring of the new year. 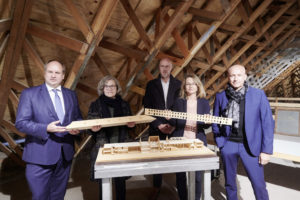 At a press conference, Dresden’s Lord Mayor Dirk Hilbert kicked off the start of construction for the repair and modernisation of the east wing of the Festspielhaus. The façade has been scaffolded over the past few days, and the building has been connected to all media (water, electricity, etc.) in advance. After light demolition work to create building space, the shell of the building is now beginning with extensive demolition work in the new central foyer. A crane will be erected on the site by the end of 2021 to transport building materials into the building and to dispose of demolition materials from the building. The old wall on the east side of the festival area was already removed some time ago. This area (access from Heinrich-Tessenow Weg/ Valeria-Kratina-Weg) will be secured by a construction fence during the entire construction work. 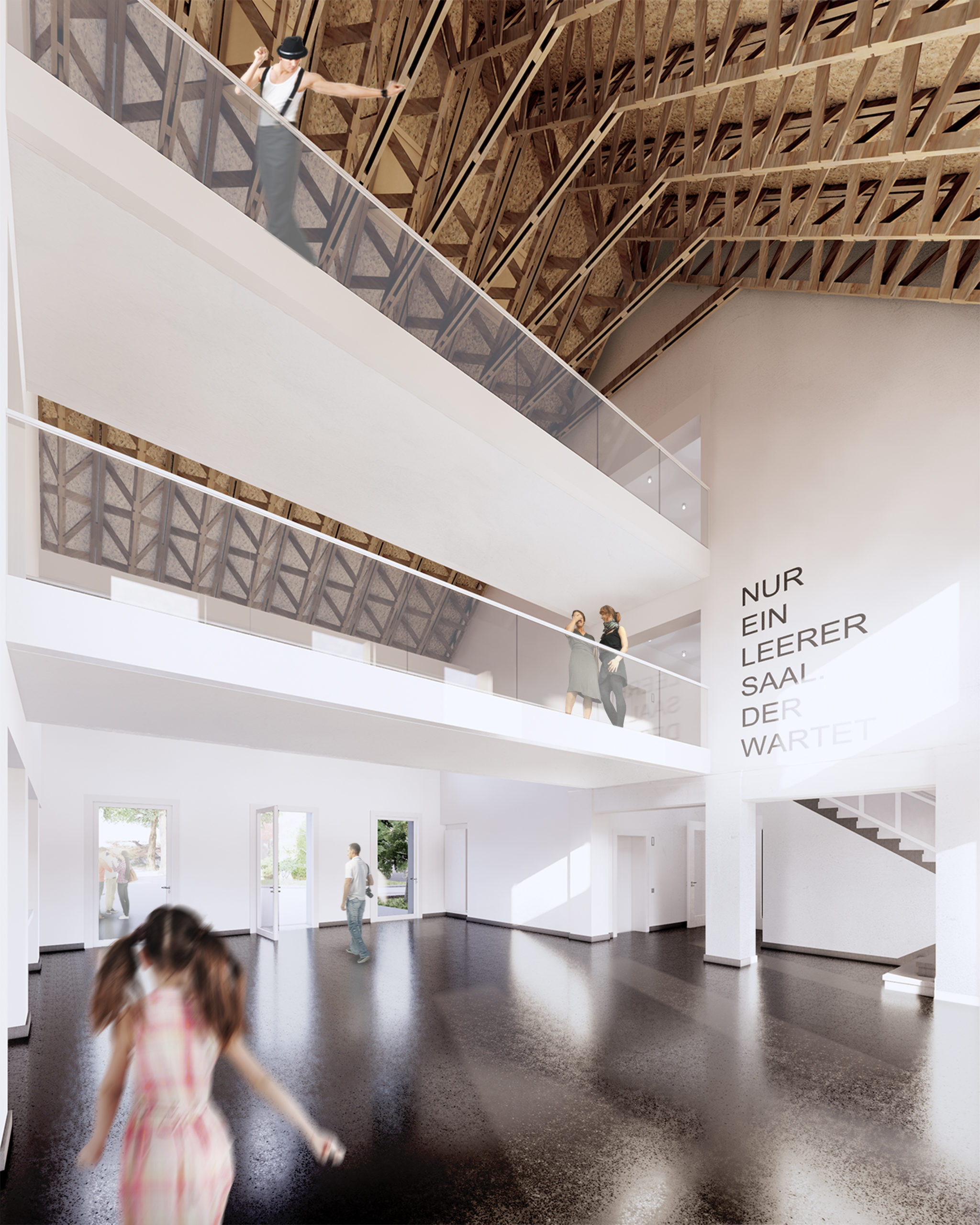