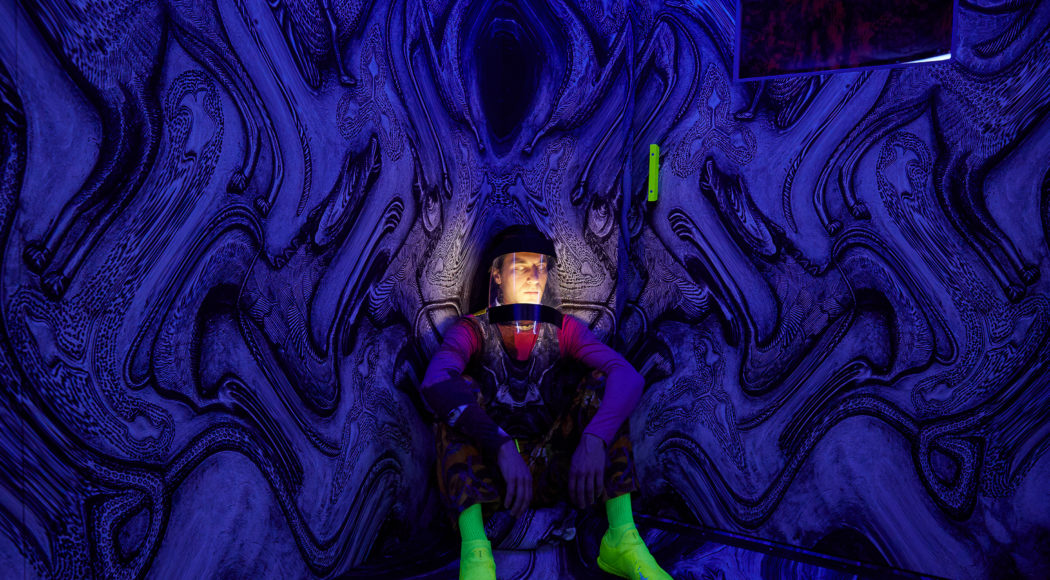 In the virtual reality installation “I AM (VR)” Susanne Kennedy and Markus Selg, in collaboration with Rodrik Biersteker, explore new immersive theatre dimensions. The audience is immersed in a virtual world with the help of a VR headset: only after the awareness of this new reality has been raised over several stages is the time ripe for the audience to meet the oracle. The future appears in the algorithms of the fractals. What question do we want to ask the oracle? Against the background of the analogy between the structure of human consciousness and VR experiences, old questions appear under new auspices. Since its beginnings – from Plato’s Allegory of the Cave to the questions of Buddhism and far beyond the Cartesian cogito – the history of philosophy has been concerned with the epistemological problem of distinguishing the truth of things from the way they appear in our perception. Who would choose the red pill, who the blue pill? In a present in which the boundaries between virtual and supposedly real reality are becoming increasingly blurred, human life appears like a large-scale simulation that is increasingly capable of generating images, creating new realities and modulating emotions. Is what is depicted in our perception reality or one of many realities? Do we not still watch fascinated a shadow play on a cave wall? Or have we long since become part of a computer game in whose glitches the truth about ourselves is revealed? “Gnothi seauton” (“Know thyself!”) – as the inscription of the temple of Apollo in Delphi, the imperative accentuates the limitedness of human existence and at the same time points beyond it as a philosophical and spiritual educational mission. Just as the truth-seeking Oedipus set out for the Delphic oracle, the hope for knowledge and enlightenment manifests itself in a digital oracle in the context of “I AM (VR)”. “I AM (VR)” was developed with VR technology and can be experienced exclusively in virtual space. The audience travels through virtual space in search of an oracle, just as the ancient Greeks once visited the temple of Delphi to have their fortunes told. What do we encounter in virtual space? The history of mankind, artificial intelligences or an avatar of our own self? Or something completely unexpected? “‘I AM (VR)’ is a journey that takes you to a place that is hidden within you,” Kennedy explained. “A kind of online dreaming where you are a wandering spirit without a body. It’s a dynamic inner simulation where you are both observer and observed.” For the theatre director, who works in Berlin, virtual reality technology enables people to become aware of their real lives in a new way. “It’s a technology that shows us how we interact with reality, our normal lives,” she said in an online artist conversation on the occasion of the digital world premiere of “I AM (VR)” at the Commons Theatre in Tokyo. “It is a tool that lets us realise what reality is in the first place”.

Susanne Kennedy studied theatre directing in Amsterdam, from 2011 she worked at the Münchner Kammerspiele, received invitations to the Theatertreffen, the Ruhrtriennale or the Wiener Festwochen, among others. After “Coming Society” (2019) and “Ultraworld” (2020) at the Berlin Volksbühne, Kennedy’s current work “I AM (VR)” is another dystopian, enigmatic investigation of identity and subjectivity, dream and reality, which she conceived together with Markus Selg.

Markus Selg is a multimedia artist who explores the dynamic between archaic myth and computer technology through digital painting, sculpture, immersive installations, theatre and VR. Together with Rodrik Biersteker, he was awarded the Faust Prize in 2020 for “Best Stage/Video Design”.

Rodrik Biersteker studied design for virtual theatre and games in Utrecht and, as an interdisciplinary artist, primarily conceives, researches and develops video and interactive technologies in a theatrical context.

HYBRID BOX is a new modular gallery in front of the Festspielhaus Hellerau presenting experimental and interdisciplinary art in the digital age by local and international artists.
www.hybrid-box.org

HYBRID BOX is a project in cooperation with HELLERAU-European Centre for the Arts, PYLON and GRAFT Architects. 2021 HYBRID BOX programme is supported by MUTEK, Goethe-Institut, Canada Council for the Arts and the Government of Canada.