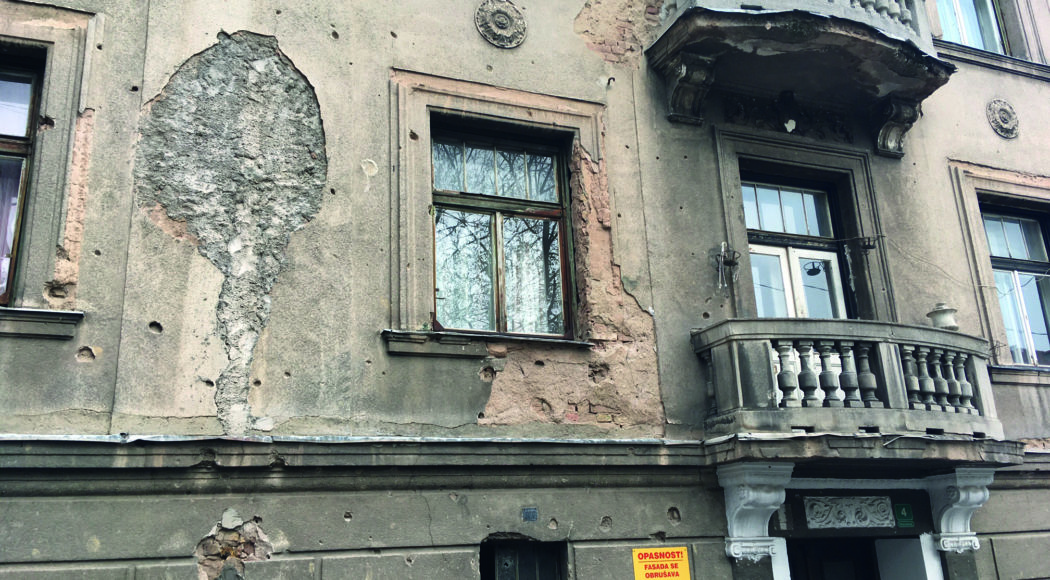 Artists research, test, reject, create and present. As a member of the Alliance of International Production Houses, HELLERAU, in cooperation with the Fonds Darstellende Künste, provides space and time for #TakeHeart residencies in 2021/22. Two artists, Tanja Krone and Kristina Dreit, give an insight into their research questions and working processes.

Excerpt from my research/travel diary by Tanja Krone

22 degrees, yesterday rain. Four weeks of travelling lie behind me. From Berlin to Athens, by land. Austria, Slovenia, Croatia, Bosnia and Herzegovina, Serbia, Northern Macedonia. Like “Hans in Luck”, I set out to find the good fight. And in doing so, I passed those borders that were raised when the border between Germany and Germany had just fallen. There, reunification jubilation and temporary euphoria.  Here, separation, demarcation, creating something “of one’s own”, manifested in a war that was and is clearly visible and tangible for everyone. The 1990s (…)I don’t want to talk about the war and I can’t get around it. I want to talk about the good fight and quickly realise that it has to be hard fought for. That’s what people tell me everywhere I go. Twenty purposeful conversations. Approximately. I keep them to myself for now.

The wound remains. You can see it best when you travel eight hours by bus from Zagreb to Sarajevo, from north to south. Beautiful landscape, rough, green, cold and warm at the same time. Presence on all levels. Clarity. Quite different from the houses, the people. Uncertainty, scepticism, unrendered new buildings, injured facades. I don’t know the map of the war. But I recognise it the more I move through here.

What does it mean when a population does not cover its 30-year-old war wounds. Is this a ubiquitous memorial and meant to be?  That wouldn’t be bad, it would have something to do with emancipation. Showing one’s own wound and dealing offensively with this injury, with this intervention. But it isn’t. It somehow doesn’t matter, left there, no time, no strength to heal these houses with their bullet holes.

Or can it be that no:r sees this here anymore. Only I, with my unclouded, unrealistic eyes, with these far-from-reality eyes, these childlike, East German-socialised eyes (…) These eyes that thought for so long that today’s wars were the last of their kind, that they would stop, it was only a question of time.

Where was I?  What have I missed?  Is that naivety, and if so, was it important to have any desire at all to think about new things? The changeability of the world.

Today there are three languages and at least two history books in schools in Bosnia and Herzegovina.  The languages sound and write the same and mean the same. Every effort is being made to make a distinction here, but it takes time.  It’s been 30 years now.  It’s different with history books, where the distinction was made more quickly, different authors, different perspectives, finished. On war, for example, on history.  Because there can be many, or the story can be told differently. Is that a quarrel? No, that’s not a quarrel.  That is a manifestation of power, of a unique position, the all-sided claiming of historical “truth” and does not seek a debate.

I meet Johanna*. We are partners in crime. She’s looking for love, I’m looking for a good fight.  Both belong together.  Both want to “do something together”. Johanna says: Interesting how you talk about Sarajevo. I think about why no quarrel can arise from such a situation of wounding. Does it take a certain health and intactness to argue? What is the foundation? What can be political frameworks to allow a disputatious population? And what role does language play? I talk about agility, that contention is alive or needs to be.  And that the (self-)prescribed passivity (because “nothing can be done anyway”), which I encountered too often on my journey through this former Yugoslavia, has made me increasingly numb. That, on the other hand, EVERYONE I met like this wished there were good forms for it. Techniques!

I read this and ask myself: How can I get hold of these techniques?  Because there are some.  How to learn them?  Which pleasurable, even new forms can be found? And I keep on collecting. Here in Athens, the officially recognised European “cradle of conflict”.

Tanja Krone is a director, performer and musician and loves everything that is “real”. In April 2022, she spontaneously embarked on a journey to the East with her #TakeHeart scholarship to search for old and new cultural techniques of arguing. She hopes to return with argumentative approaches and a better understanding of what or who “the East” actually is.

Funded by Fonds Darstellende Künste as part of Neustart Kultur: #TakeHeart. Realised by the Bündnis internationaler Produktionshäuser, the Netzwerk freier Theater and the flausen+bundes netzwerk. The residency programme at HELLERAU is funded within the framework of the Alliance of International Production Houses by the Federal Government Commissioner for Culture and the Media.