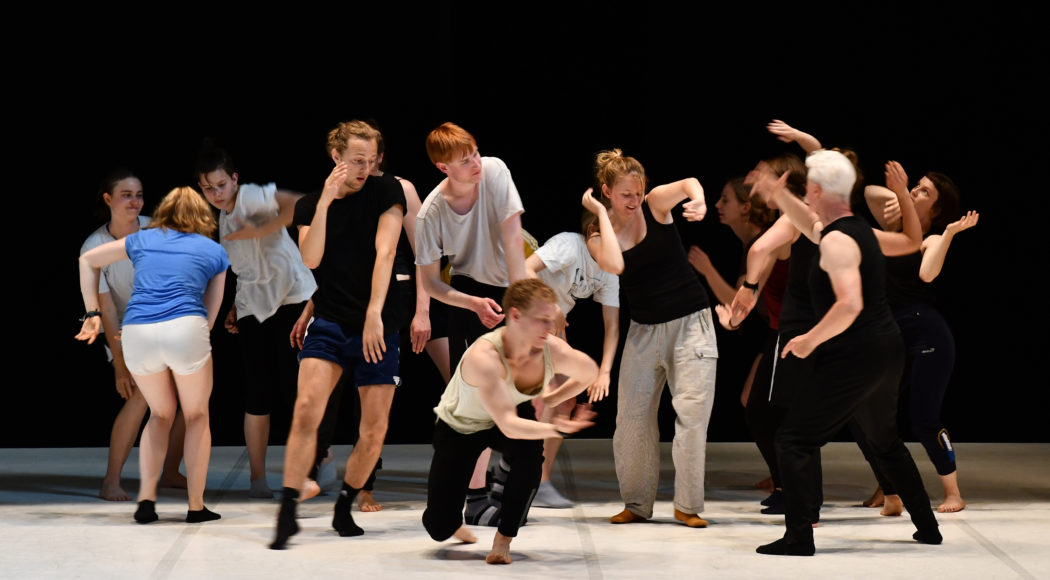 The fact that HELLERAU has a very special, very unique audience is proven practically every day. And it is also noticeable how it has been rejuvenating for some time know. One can certainly speak of a “growing” interest. But that does not yet give any guarantees. Especially since HELLERAU, although easily accessible, is still a bit “further out” and the Festspielhaus is far from being on everyone’s lips. Frauke Wetzel, as a multifaceted cultural scientist interested in history, stories and curious, with a gift for achieving the possible as well as the impossible, has been significantly involved in the tapering audience structure since October 2013. She is responsible for “Audience Development, Cultural Education and Networks” at HELLERAU – European Centre for the Arts. Which sounds rather complicated and also appears to be a truly comprehensive and “borderless” field of activity. The fact is that change always requires a rethinking of circumstances, and success often comes late. But everyone who has been infected with the HELLERAU “virus” (which is not a question of age) will ultimately help to keep things moving, stay tuned and talk about it. This cannot be listed at all. On the other hand, the work with various “networks” and education costs an enormous amount of energy, patience and empathy for the initiators. “When I started in 2013 in HELLERAU,” Frauke Wetzel recounts, “there was nothing in my job description like: Take care of children and schools! I made that my own task and my own experience. Compared to other houses, the audience was halfway young. But there was still a lack of young visitors. And although the “Kids on Stage” festival always brought young performers and guests with continuity to HELLERAU, there was a general lack of schoolchildren among the audience. Habits had to be broken and educators had to be made curious about what happens at HELLERAU. And that all takes time. Today, there are connections to about 200 teachers and there are for example, project weeks, guided tours or talks about performances.“ Especially memorable was how Frauke Wetzel brought together a young group of critics at the “modul dance” festival in 2015, who discussed the various performances in front of the camera. Visitors were usually able to see this on screen a little later. A youth jury as one might wish for: cleverly describing, judging, knowledgeable. Lena was a member of the youth jury at that time, and continued to be actively involved with HELLERAU. Although she has been studying far away for a long time, she always uses visits to Dresden to “drop by” and is better informed than some people on site. “At Frauke’s suggestion we recently met as alumni, this time for a kind of ideas workshop for future projects. There, it was for example also about workshops. Right from the start we had excellent contacts with Jacobo Godani’s Dresden Frankfurt Dance Company. This is now continuing and the circle of participants is also changing. I absolutely appreciate what I have in HELLERAU. Here you simply belong, feel good, are informed further. And the entrance fees are very affordable. In addition, there are always familiar faces like Frauke.” The inspiring idea with the youth jury of that time soon continued with the HELLERAU blog of young commentators and critics at “Kulturgeflüster” Dresden, an online editorial office in cooperation with the Media Culture Centre Dresden. Whoever takes a look, listens in, will feel very clearly how attentive the participants (some of them have been with the project for three years) are in their perception, how they openly discuss what they have experienced with each other. This also encourages them to find their own positions and articulate them. Certainly, this does not yet cause a mass rush of younger visitors to HELLERAU, but constant dripping wars the stone. And what counts is the example. Others become aware of it, hear about it, some even apply to Frauke Wetzel as student intern. Who, as “alumni”, are already a whole group of people. Hardly anyone else at the house does that, which is of course a question of time. Which yo have to take for it. On both sides. The students are no less under time and performance pressure Whereby the experiences in HELLERAU are certainly also a good school. Frauke Wetzel sums it up when she says: “The place simply works. With a festival theatre, open-air grounds, visitor centre, with everyone who works here, including the very special technicians. Even for the youngest visitors there is always something to play, to watch, to participate in HELLERAU. Everyone is wanted here.”

*Although the masculine form has been chosen in the text, the information refers to members of all genders.