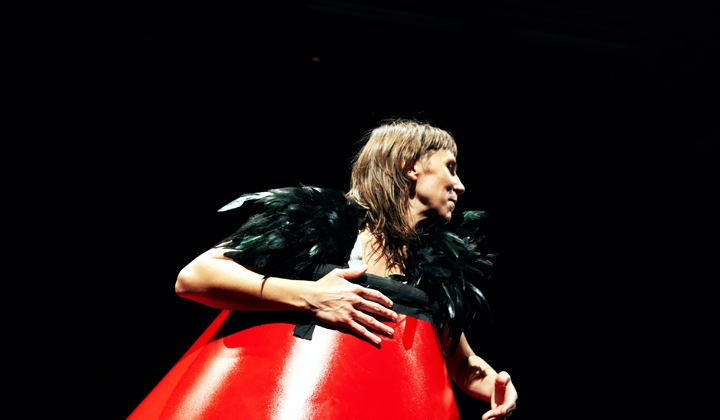 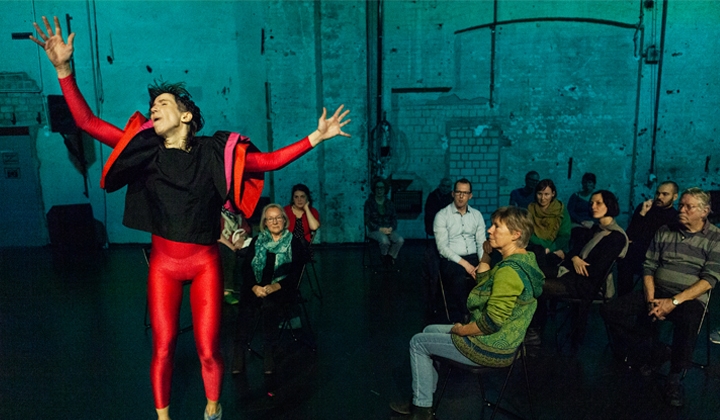 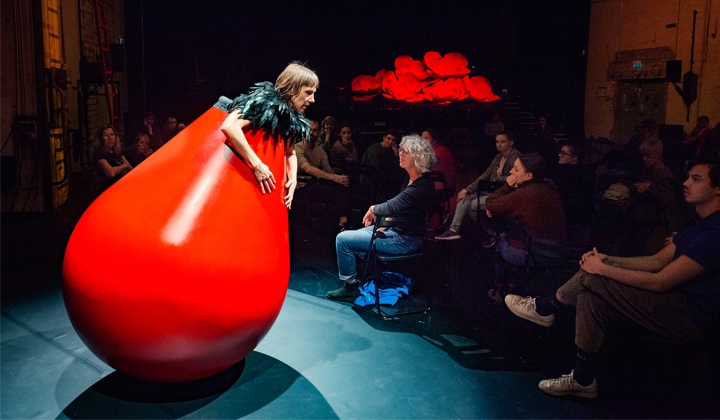 In 2016, Antje Pfundtner started a trilogy in Gesellschaft about the laws of time and transience. Her leitmotif was Albrecht Dürer’s copperplate figure “MELENCOLIA I”, an angel-like figure crouching near the ground with its knees drawn up. Despite her wings, this figure does not take off. Everything is at rest: Movement, motives, work, time – they stand still. Her inaction confuses: for is she already doing nothing, or has she not even begun to do anything? What would be the beginning or the end of her action if she were not standing still?

The solo “Sitting is a good idea”, which takes place in the midst of the audience, is the last part of the trilogy and questions aloud what potential for action motionlessness has. For example, does sitting necessarily mean staying seated? Sitting versus standing up, standing up versus being stood up. Is standing up a more powerful act than sitting down? The connotations of standing up are: To rise – to go vertical – to act – to rehearse the uprising. Gladly, but with whom? In any case, standing up is far too short a moment to celebrate it so strongly. Because standing up is, for the time being, only the duration of its movement. And then follows action.

“Hamburg’s outstanding choreographer inspires on her solo evening – even when everyone has long since left the auditorium. It is done. Hamburg’s outstanding choreographer Antje Pfundtner has completed her three-year trilogy on time and transience. Sitzen ist eine gute Idee’, her solo dance evening at Kampnagel, is probably her most radical work to date after ‘Ende’ and ‘Alles auf Anfang’. In a fraction of a second, she switches there between courageous, deeply sad, silly, weird – and sometimes she is all of these at the same time. (…). An announcement is always followed by the unexpected. It is a dance evening of volte-face and craziness. (…). Antje Pfundtner captivates her audience at all times – with graceful movements but also with clever words. (…). Ultimately, the evening raises philosophical questions about time and transience. With holy seriousness Pfundtner breaks every sentimentality. (…). And when Pfundtner continues as a stand-up man at the end until the last guest has left the hall, it is the furious finale of a harmonious evening.” Annette Stiekele/ Hamburger Abendblatt

Antje Pfundtner in Gesellschaft (APiG) is based in Hamburg, produces stage plays and initiates collaborative spaces. APiG is made up of the permanent core team around Anne Kersting (dramaturgy and curation), Hannah Melder (production management, PR and marketing) and Antje Pfundtner (choreography, dance and artistic direction), among others, as well as changing guests and colleagues.

Antje Pfundtner and her company were honoured with the George Tabori Main Prize in 2016 and the DER FAUST Theatre Prize in 2020 in the category “Directing Children’s and Youth Theatre”. In addition, APiG was awarded the honour of the German Dance Prize for “outstanding artistic developments” in 2020. In addition to its stage collaborations, APiG develops formats of artistic sharing: it is currently initiating the TISCHGESELLSCHAFTEN, an assembly initiative for networking, sharing resources and perpetuating knowledge exchange.

“Sitting is a Good Idea” is a production by Antje Pfundtner in company in co-production with Kampnagel Hamburg, HELLERAU – Europäisches Zentrum der Künste Dresden and FFT Düsseldorf. “Sitzen ist eine gute Idee” is supported by the Free and Hanseatic City of Hamburg, Department for Culture and Media, the Fonds Darstellende Künste with funds from the Federal Government Commissioner for Culture and the Media and the Kunststiftung NRW. Supported by the Probebühne im Gängeviertel. 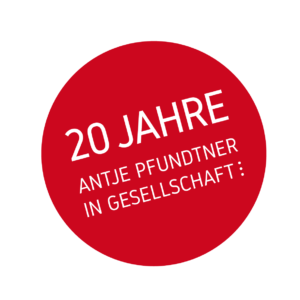