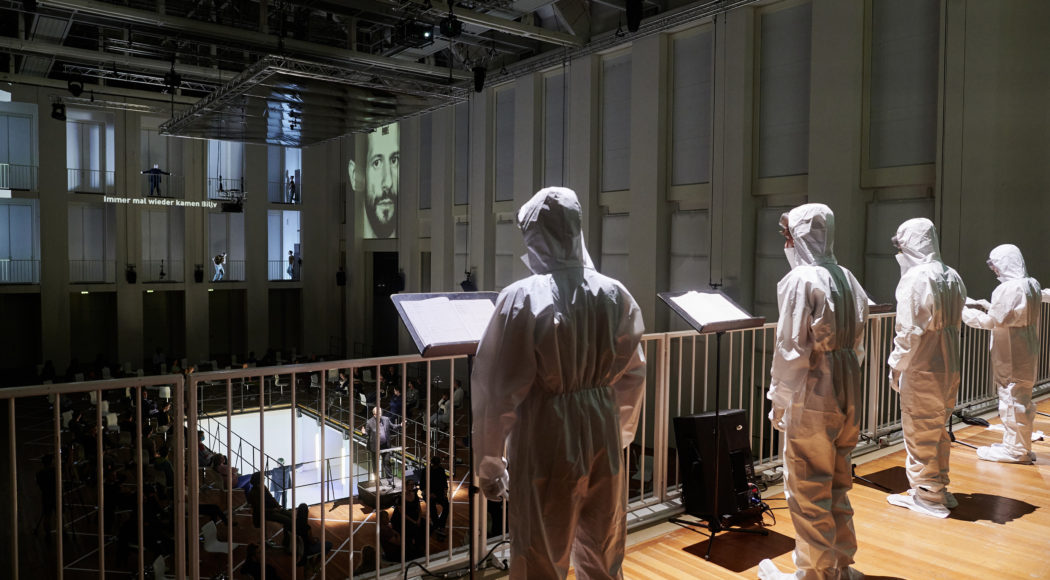 In the cellars of Schlachthof 5, Kurt Vonnegut survives the heavy bombing raids of 13 February 1945; his novel, published in 1969, becomes a cult book. In September 2020, the world premiere of the music theatre piece “Schlachthof 5” directed by Maxim Didenko took place at HELLERAU, which will now be performed as a concert version.

Kurt Vonnegut tells about the horror of war and at the same time makes remembering itself the theme. His novel “Schlachthof 5” is collage, satire, biography, science fiction and everything at the same time: fragmentary and excerpted, the novel narrative wanders through different time levels and lets personal experience and lived experience merge with fiction. As a young American soldier, Vonnegut is taken prisoner of war in 1944 and brought to Dresden. In the cellars of Schlachthof 5, he survives the heavy bombing raids of 13 and 14 February 1945. His novel, published in 1969, becomes a cult book. How do we remember the war? Which experiences become part of our cultural memory? 75 years after the end of the Second World War, the questions raised by “Schlachthof 5” are more topical than ever. During the Nazi and GDR eras, the events of the night of the bombing became the plaything of a changing instrumentalisation by different political actors and camps. And even today, the “Dresden myth” is constantly being perpetuated. A broad alliance of civic engagement has formed across various population groups, parties, institutions and civil society organisations against the appropriation of the bombings by (neo)nationalist and right-wing populist groups.

Against this background, the Russian theatre director Maxim Didenko created a new stage version of “Schlachthof 5”, which premiered in September at HELLERAU – European Centre for the Arts Dresden. Didenko, who has received many awards and is internationally known for his visually powerful choreographic-theatrical stage language, sought new possibilities for a contemporary look at Vonnegut’s text and the “myth of Dresden” with his production.

With his new choral work, George Dreyfus dedicated himself to the Jewish resistance during the Nazi era. The German-language text, written by himself, speaks of illegal political work, but also mentions the fatal consequences of the arson attack: the smashing of the group and the shooting of Jewish hostages.

With his four-part a cappella chorus, Dreyfus took up the socialist workers’ choruses of Hanns Eisler; he once described this Schönberg student and Brecht friend, who also composed the national anthem of the GDR, as “my cultural hero and role model”. The new composition consists of four large, mostly consonant parts in which short motifs intoned by the soprano are taken up by the other voices. Individual text passages are spoken, such as the appeal “Comrades! Victory is not far away, it will be ours! After the report about the shot Jewish hostages, the final section (,,Cheer up!”) begins with a quiet appeal for patience. But the mention of a “revolutionary” killed with a guillotine is followed in fortissimo by a desperate cry: “Like all the millions of others, they died for nothing, for nothing! The fanfare melody used here is reminiscent of one of Hanns Eisler’s best-known fight songs, his “Left March” on a text by Vladimir Mayakovsky.

AuditivVokal Dresden under the direction of Olaf Katzer