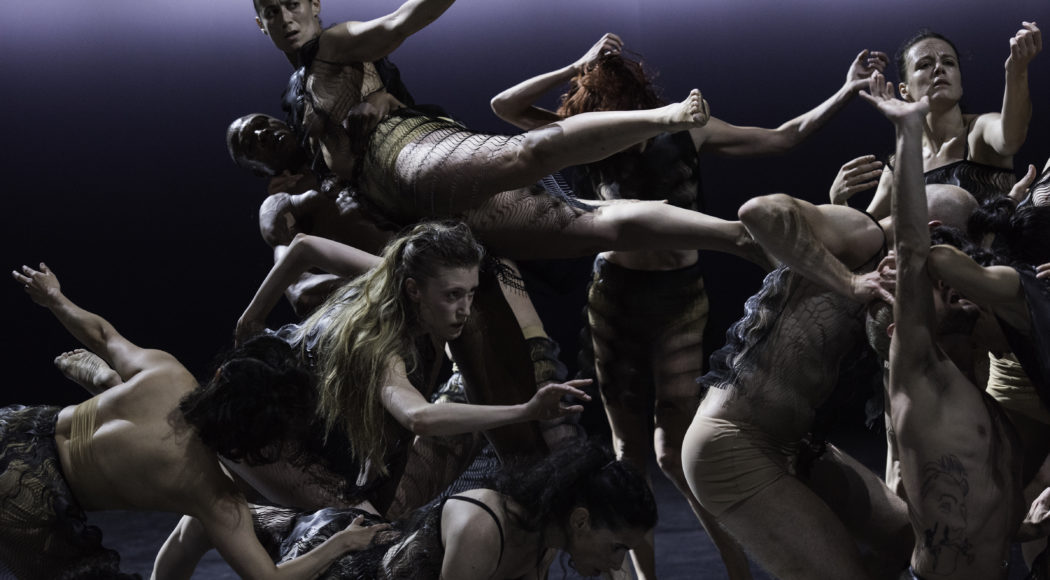 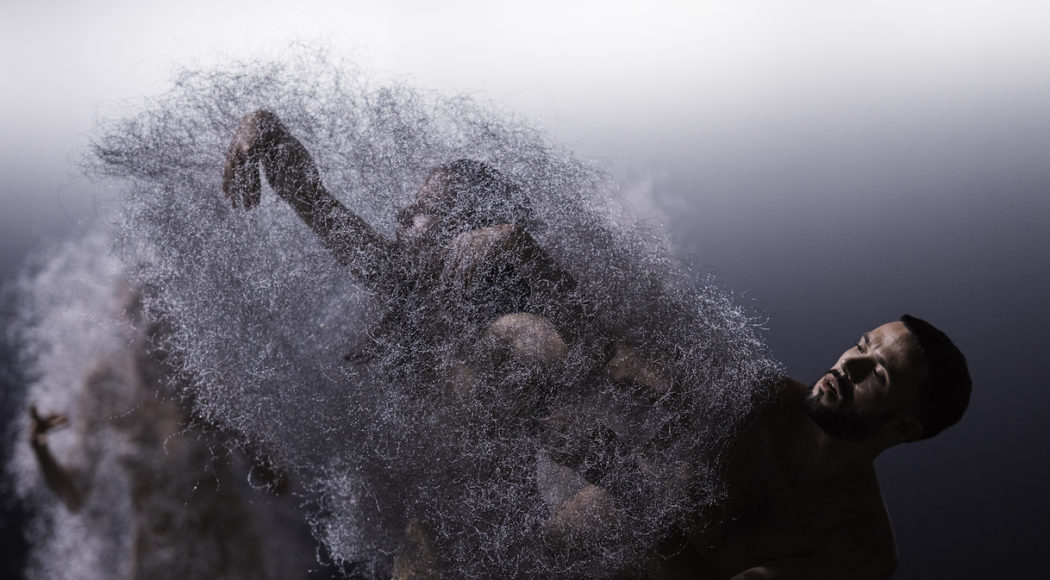 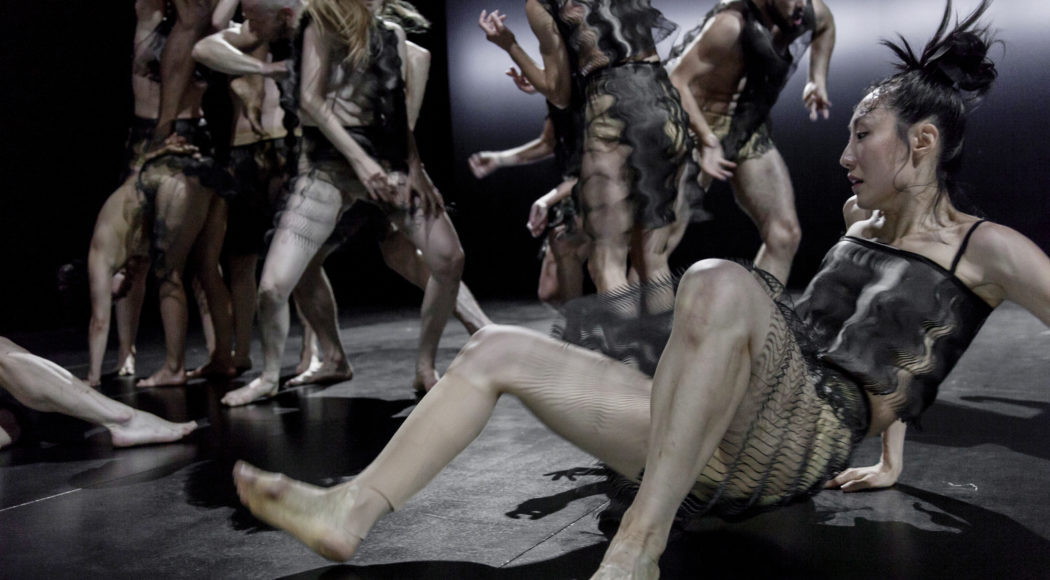 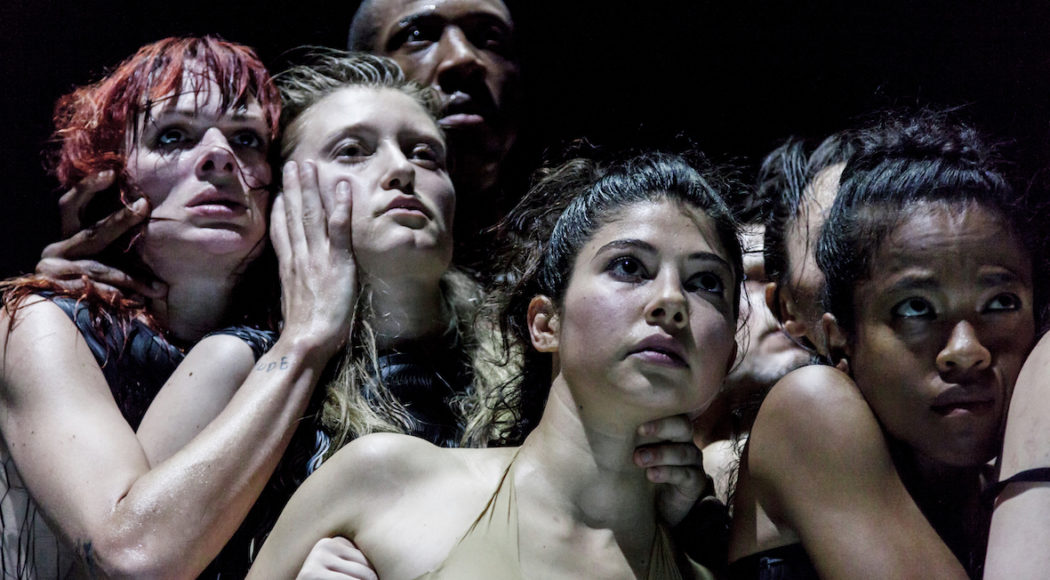 “Visual audacity is paired here with a strong artistic statement. Sasha Waltz grips the audience with their collective fears. She draws the image of a society that threatens to fall apart, whose bonds seem exhausted. “Creature” is a piece that gets under your skin – also thanks to the expressive dancers.”
Tagesspiegel, Sandra Luzina, “Stachel im Fleisch”, 10.6.2017

In Sasha Waltz’s choreography “Creature”, dance arises from tensions between creatures that share the same habitat. The dancers’ common experience of turmoil, ecstasy and the search for shelter allow them to merge into a single creature and then dissolve into individual fates again, entering into new conflicts and connections. Conditions of power and powerlessness, dominance and weakness, community and isolation, illness and lust explain themselves as facets of the same, dazzling nature. The struggle of these beings with the chaos of their own impulses reflects the private and social challenges of our present.

“Creature” is an interplay of artistic voices that are united by a strongly interdisciplinary attitude. The sculptural, organic and technoid costumes were created by Iris van Herpen. The Dutch fashion designer, who combines traditional craftsmanship with innovative digital technology, is known worldwide for her progressive work. With his lighting concepts, Urs Schönebaum creates spaces for theatre and opera productions, exhibitions, performances and installations worldwide, including for Marina Abramovic, Robert Wilson and Michael Haneke. The musicians* of the Soundwalk Collective (Berlin/New York) incorporate methods of anthropology, ethnography and psychogeography into their cross-genre sound compositions. More recently, they have been represented at documenta 14 in Athens/Kassel and created the album “Killer Road” together with Patti Smith.

Sasha Waltz & Guests was founded in 1993 by Sasha Waltz and Jochen Sandig in Berlin. To date, numerous artists* and ensembles – architects, visual artists, choreographers, filmmakers, designers, musicians, singers and dancers – from 30 countries have participated as “guests” in over 80 productions, “dialogue” projects and films. Sasha Waltz & Guests works in an international, constantly developing network of production and guest performance partners and shows around 70 performances per year worldwide from its repertoire of currently 20 productions. In Berlin, the company cooperates with a wide range of institutions such as city theatres, opera houses and museums and has contributed to the founding of innovative production venues for the dialogue of the arts – the Sophiensaele (1997) and the Radialsystem, Space for Arts & Ideas (2006).

In 2013, the company was officially appointed “Cultural Ambassador of the European Union”. In 2014, the Performing Arts Fund honoured Sasha Waltz & Guests with the “george tabori honorary award”.

The 2018/19 season marks the 25th anniversary of the founding of the Sasha Waltz & Guests Company. New productions are already being planned beyond 2019. Sasha Waltz will take over the artistic direction of her company as well as the co-direction of the Staatsballett Berlin together with Johannes Öhman. In addition to Berlin operations, international guest performances and repertoire maintenance, Sasha Waltz & Guests is also increasingly active in the field of “Education & Community” – starting with the Children’s Dance Company Berlin founded in 2007, the platform “ZUHÖREN – Dritte Raum für Kunst und Politik”, which has been active since 2016, and various offers for professional dancers*.