17:00 & 19:00 Lecture
“History of the Garden City and the Festival Theatre in NS” with Claudia Dietze and Robert Badura

A reading takes the audience into the garden city of the 1930s and the history of the Festspielhaus in the NS era, a historical diorama in which the boundaries between fiction and reality become blurred. Robert Badura and Claudia Dietze.

In addition, the permanent exhibition is running in parallel on the #WOD bus:

21 – Memories of Growing Up, Mats Staub, part of the exhibitions in the bus, thus permanently on view, video installation

More information about the campaign:

The commemorative bus Requiem for the Future is a mobile project on current perspectives of remembrance and mourning in Europe on the occasion of the 75th anniversary of the destruction of Dresden by war in February 1945.

We invite you to reflect on current perspectives of remembrance and to experience our city as a place of exchange. “So that such deeds stop” was how Ibrahim Arslan, survivor of the racist arson attacks in Mölln in 1992, justified his current commitment against racism. For the survivors and contemporary witnesses of the Shoa, too, the concern for the future is always in the foreground when they overcome pain and talk about what they experienced.

Requiem for the Future is jointly organized by the open association of Dresden cultural institutions #WOD – Weltoffenes Dresden. 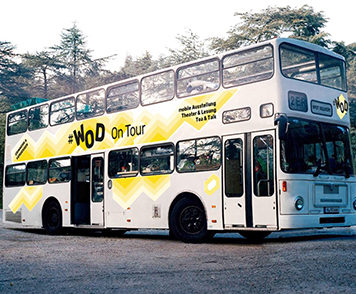 With a travelling exhibition, thematic city tours and a varied programme of special events, Dresden's cultural institutions are taking to the stre ...
16:00
Eintritt frei
Archive