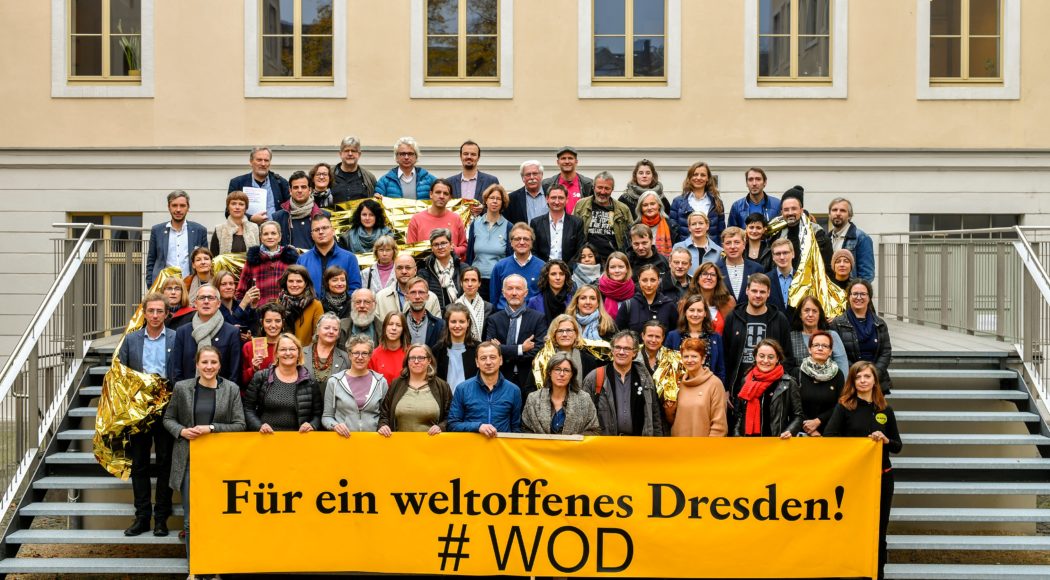 Herz statt Hetze, #WOD (Weltoffenes Dresden), the Tolerave e.V. and the Parade der Vielfalt invite together to an action day “Gemeinsam für Vielfalt!” (Together for Diversity) on May 4th. Kicking off the month marked by the local and European elections and to strengthen social cohesion, the four-member alliance, together with all the courageous Dresden citizens, is sending a positive signal for an open society, respectful coexistence and the freedom of art.

At 2 pm, both the Tolerade at Neustadt station and the Parade of Diversity at the main station will start, as will a stage programme and an interactive Fair of Diversity on Postplatz with the participation of numerous Dresden cultural institutions and associations.

The highlight of the day is the meeting on Postplatz with a joint rally at 3:45 pm.

The stage programme and Fair of Diversity organised by #WOD include a mobile screen printing workshop, artistic sea containers, table theatre and diversity masks for DIY. In addition, excerpts from the stage programme “Himmel über Berlin” and the dance theatre “Freie Radikale” will be presented, artists will sing songs from their homeland and the citizens’ choir “Blaues Wunder” will also appear on stage again.

The Tolerade is a music parade that is taking place this year for the fifth time. It is organised by Tolerave e.V., a network of participants in Dresden’s club and electronic music culture. Together with about 80 supporting associations and initiatives, more than 15 trucks are designed, which bring together thousands of people via their way through the city with clear messages and music.

The Parade der Vielfalt 10.0 will start at 2 pm from the main railway station to move loudly, colourfully and diversely through the middle of the city. Accompanied by the drummers of ‘Samba Universo’, the Parade der Vielfalt demonstrates for the equal rights of people with disabilities, for equal opportunities, accessibility and above all for an inclusive society. For the tenth time already, the campaign will take place on the occasion of the European Protest Day for the Equality of People with Disabilities. This year’s patron, Lord Mayor Dirk Hilbert, will speak at the Kulturpalast before the parade  leads into the Tolerade on Postplatz.

After the rally at the Postplatz is over, the Tolerade will continue its way through the city centre (Pirnaischer Platz) and Dresden Neustadt (Albertplatz, Alaunpark). The aftershow party will take place in 5 different locations (Sektor Evolution, objekt klein a, Tante JU, TBA and Club Paula), with around 50 artists providing a wide-ranging music programme. Revenues will be donated.

All citizens are cordially invited to join in on one or the other parade or to come directly to the Postplatz.