“Die Bude” is a mixture of pantry, curiosity cabinet and messy living room. It houses plants, wine, furniture, photos, cakes and other impractical things – bodies also appear. During the time of its existence, “Die Bude” is constantly transforming itself and functions as a transit space for an overabundance of objects, gestures and melodies.

Hermann Heisig lives and works as choreographer, dancer and performer in Berlin. Born 1981 in Leipzig, he participated in 1997 in the competition ‘Das beste Tanzsolo’ during the euro scene leipzig, followed by numerous improvised solos in galleries and clubs.

Before and during Hermann’s dance training in Berlin, between 2000 and 2006, he developed his first projects and collaborations, among others with Marina Quesada, Diana Wesser, Anja Müller and the band Brockdorff Klang Labor. In 2007 Hermann took part in ex.e.r.ce 07, a seven-month course program for choreography at CCN Montpellier, under the direction of Mathilde Monnier and Xavier le Roy. As a dancer Hermann works since 2008 with Meg Stuart/Damaged Goods, Martine Pisani, Martin Nachbar, Begum Erciyas, Thomas Lehmen and Corinna Harfouch.

Hermann’s own works deal with the frictional effects that bodies produce within themselves, with each other and with their environment. They resist efficiency and celebrate an aesthetic of the do-it-yourself, involuntariness as a motor, the monstrous, the living, the mechanical.

“I am instinctively interested in projects that are cumbersome and that block themselves against a fluid process. In this respect, I follow a kind of paradoxical logic: to deal with dance in a time of disembodiment. I see choreography as an opening of spaces in which possible and impossible relations between spaces, behaviour, people and forms of representation can be negotiated. 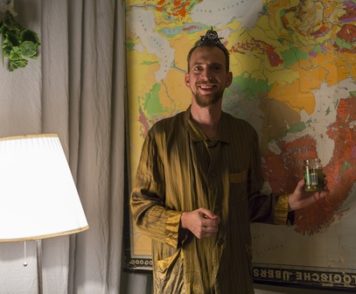