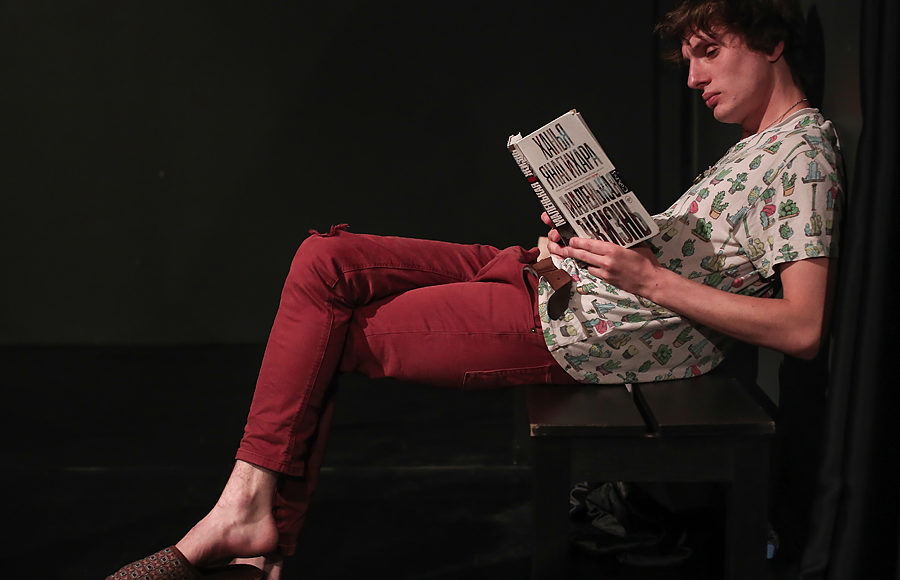 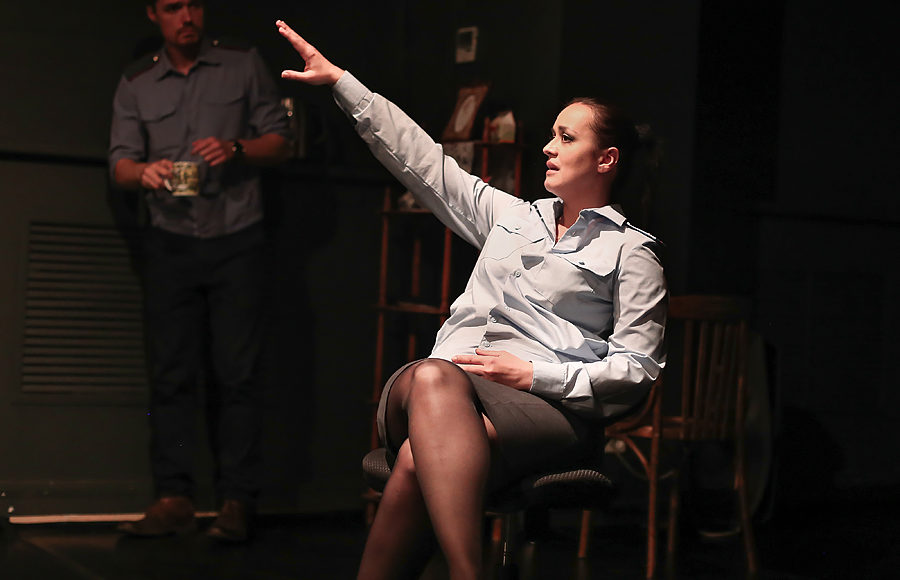 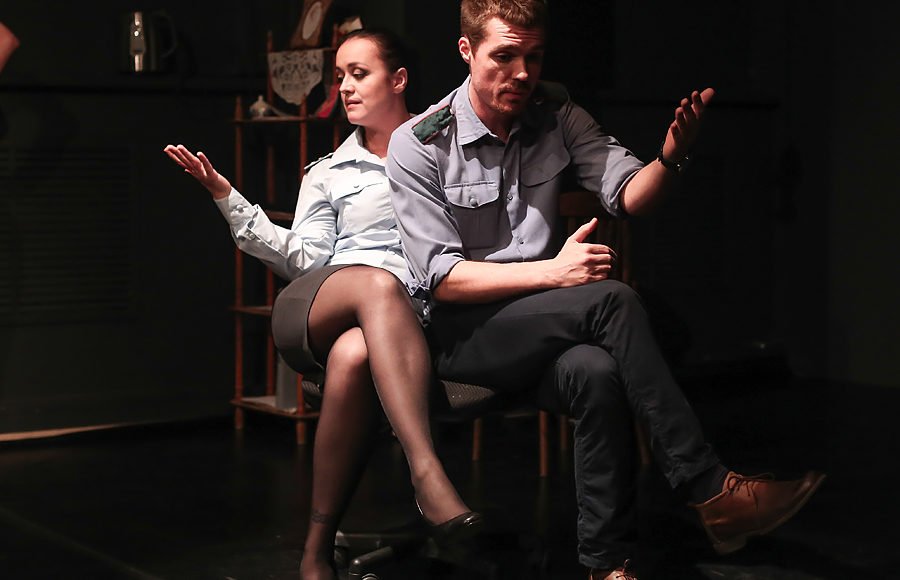 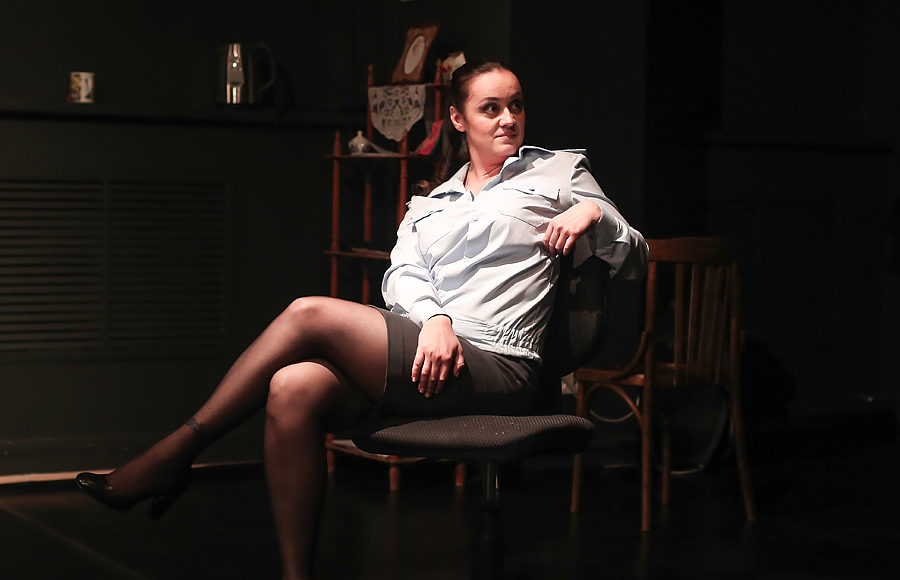 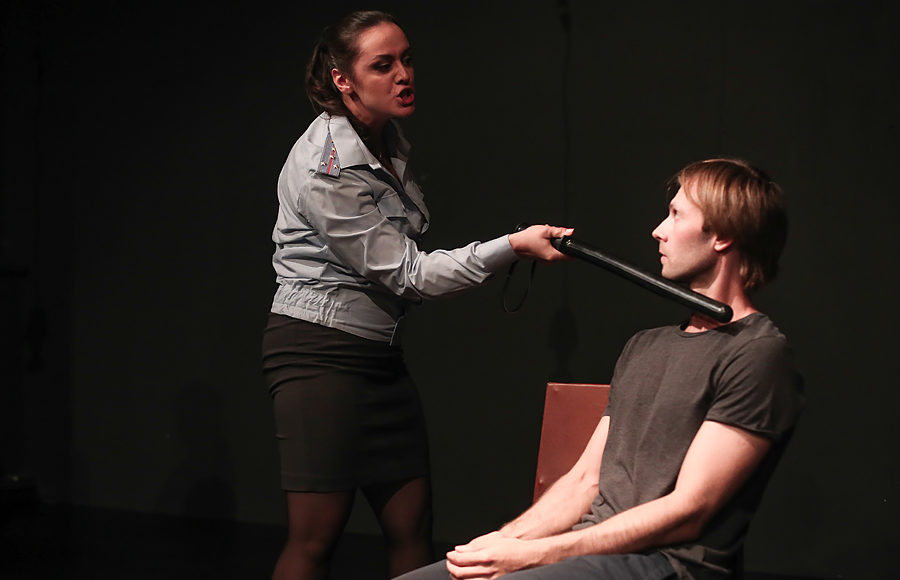 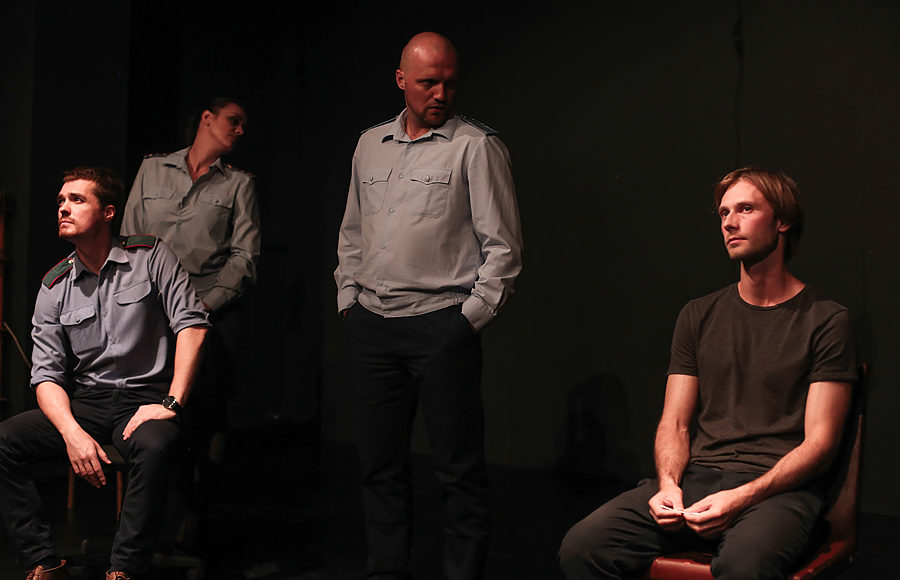 The well-known Russian writer Dmitry Danilov wrote his first successful debut as a playwright with the comedy “The Man from Podolsk”.

The story about an average citizen of the Russian Federation who is put under pressure by cultural and educated policeofficers to love his mother country, hits the heart of today’s social divide: the police are the most popular target for criticism. Few people are willing to support those associated with violence and the use of inhuman means to suppress freedom. The police in the play, however, is different: they read the lines of the structuralists, quote Sorokin, talk about Malevich and attend concerts of the German band “Einstürzende Neubauten”. But beyond the reflective, slightly depressive atmosphere, Ugarov’s production, in the spirit of its very own doc.teatr-naturalism, makes us reflect above all on the meaning of the concept of “patriotism”, which is at the centre of today’s struggles.

The thirty-one year old protagonist of the piece, who commutes every day from Moscow’s suburbs to the centre, has no respect for the prefabricated houses of these autonomous suburbs – but he loves Amsterdam. The local police gently but clearly explain to him that every urban landscape has its own charm. It confronts the public with the choice of loving their homeland as it is or not.

Dmitri Alexejewitsch Danilov has mainly published short stories and novels and is one of the best-known contemporary Russian writers, whose works have also been translated into English, Italian and Dutch. He began his career as a journalist and travel writer and made a name for himself with his documentary style and dry humour. His best-known novel Description of a City (Russian: Opisanie goroda) was shortlisted for the prestigious Russian Bolshaija kniga literary prize in 2013. The man from Podolsk and Sergey is stupid are his first two plays. They have already been performed successfully in Russia several times. Danilov lives in Moscow.

Mikhail Ugarov, born on 23 January 1956 in Arkhangelsk in northern Russia, was a trained actor, playwright and, since 2002, co-founder and artistic director of theatr.doc, which he developed together with the author and playwright Elena Gremina into the most important Russian independent theatre stage of recent years. He studied Dramatic Arts at the Gorky Literature Institute, made numerous films, TV series and staged many plays for the theatre. He was one of the organizers of the Lubimovka Young Dramaturgy Festival and co-founder of the New Drama Festival. He won several awards, including the Golden Mask and the Tefi Television Award for the television series “Petersburg’s secret”.

Igor Stam studied acting at the acting academy of Mikhail Schepkin, at the teatr.doc he is also active as a director.

teatr.doc (Moscow, Russia) was founded in 2002 by several playwriters as a non-governmental, non-profit, independent joint project. Many works are carried out by the participants on a voluntary basis. Most TEATR.DOC productions are produced in the documentary theatre genre. They are based on authentic texts, interviews and the lives of real people. Documentary theatre is a special genre that operates at the interface of art and contemporary social analysis. The theatre’s creative groups develop their productions from encounters with “real” people, from interviews that touch on relevant contemporary issues. As elements of the theatre, the real people are just as important as the method of literal reproduction (verbatim theatre), improvisation, theatre play and training. Many publications were devoted to theatre productions, they won prizes, were invited to renowned theatre festivals in Poland, France, Germany, Austria, Hungary, the Baltic countries and large Russian cities. The theatre was awarded the “Most Creative Theatre” prize by Creative magazine and the “Stalker” film festival. The following theatrical performances were winners and nominees for the Golden Mask: A Man from Podolsk, Oxygen, Life Is a Success, Light My Fire and Akyn-Opera. Currently the repertoire includes 30 shows.