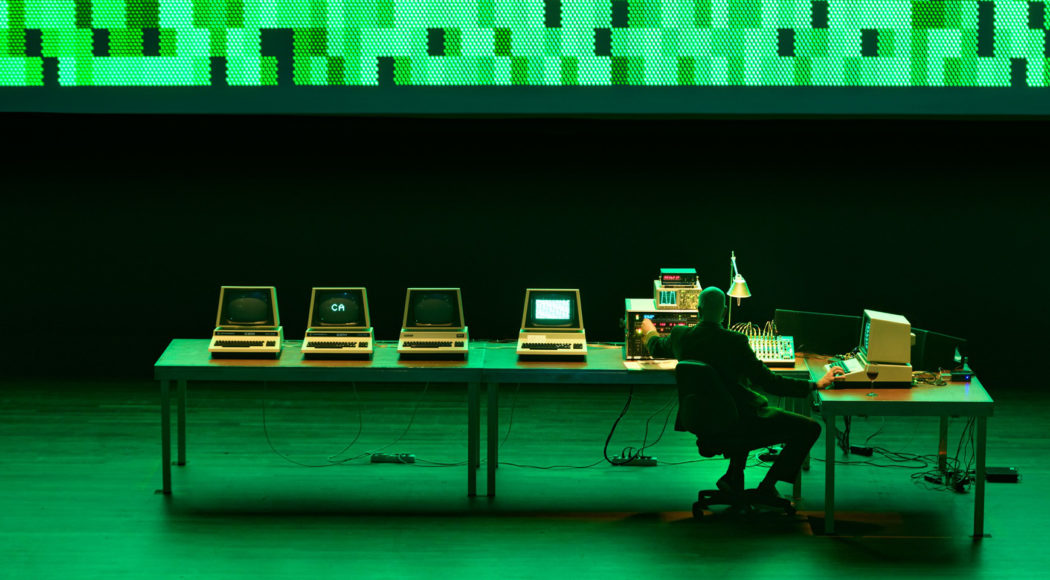 The CBM 8032 AV project is an exploration of the beauty of simple graphics and sound, using computers from the early 1980’s. This work is about the ambivalence between a contemporary aesthetic and the usage of obsolete and limited technology from 40 years ago. Everything presented within the project could have been done already in the 1980, but it needed the cultural backdrop of today to come up with the artistic ideas driving it.

When artists began to explore computers as medium in the 1950’s, technology was limited and the resulting minimalism in expression was a necessity. Half a century later, teams of thousands of programmers work on high-end games and movies, utilising clusters of the fastest computers available. The sight of a green cathode ray tube display once was the promise of an exciting future, now it is nostalgic.

On stage there are five carefully restored Commodore CBM 8032 computers, running custom software developed by the artist and his team. Three computers create sound, one machine is responsible for the graphics and one is controlling the others, with their displays turned towards the audience.A large projection at the back of the stage is mirroring the output from the video computer.

The act of performing is operating these computers: calling routines, changing parameters. It involves a lot of key pressing, together with sound adjustments on a mixing desk and a rack with early 1980’s digital audio effects processors.These machines were never meant to be used for the creation of audiovisual art, and the results are slow, harsh, geometric, with low resolution and exclusively monochromatic green.

Yet they radiate their very own groove and visual appeal. The sound consists of coloured variations of digital noises, deep digital sine waves, sparse clicks and high glitchy bleeps, very cut-up and metrical, with interwoven quiet or even silent moments, further processed and refined with filters and occasional reverb.