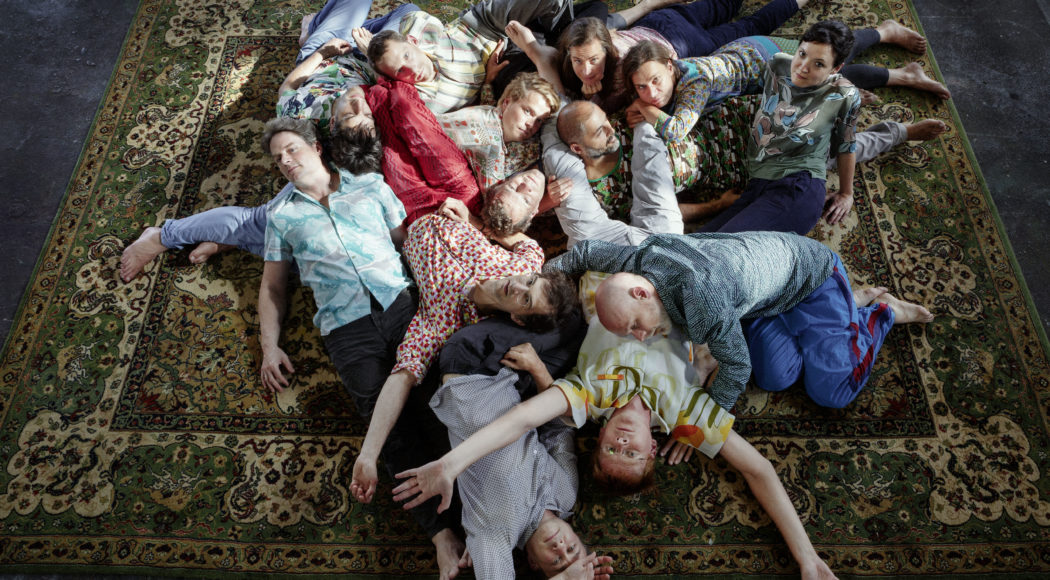 Due to the current COVID-19 measures the concert has been postponed to 08.01.2021.
Unfortunately, tickets are not valid. We will keep you up to date.

For Enno Poppe, composing means: taking things apart. In “Rundfunk” he deconstructs historical sounds from the 1960s and 1970s such as FM synthesis, Minimoog or pig organ and reassembles them anew with ensemble mosaik.

“Composing means taking apart. In RUNDFUNK I use historical sounds, not historical instruments. Nine computers and nine keyboards are used as instruments. The sound is deconstructed and reassembled. The piece consists of thousands of atoms. The music is analytical-emphatic. It is assembled in the laboratory. While composing I wear a white coat. The moment I no longer understand what is happening, art is created. The beauty lies in the excessive demand.” – Enno Poppe

“In the wild 55 minutes it goes tonally into mad highs and lows. Those who listened to the piece more often thanks to its Europe-wide festival tour were able to enjoy the ensemble’s ever more groovy playing – a pleasant change in the new music business, which often does not extend beyond the premiere”. – Katja Heldt, positionen, May 2019

Without radio, New Music in its present form would not exist. The invention and development of electronic music in the studios of broadcasting stations is one of the great moments of a medium that wanted to find out something about its own possibilities and conditions, and which has afforded itself institutes for basic research. Today, the idea of a Max Planck Institute financed by fees is hardly conceivable, so much so that the concept of radio has changed from a radio station to a daily accompanying medium.

In the field of electronic music, there has been rapid technological development for decades. The pace of disappearance is just as fast. Older works often cannot be performed because the technologies are missing or no longer working, or one simply does not remember how it was done 25 years ago. Because only the latest technology works, the sound aesthetics are always extremely time-related. Pop music can be dated exactly in this way: by a certain preset of the DX-7 or a software tool.

Composing means taking apart. On radio for nine synthesizers, I use historical sounds, not historical instruments. I use nine computers and nine keyboards as instruments. The sounds come from the sixties and seventies: FM synthesis, Minimoog and pig organ. The pioneers are Gottfried Michael Koenig, Thomas Kessler, John Chowning, Wendy Carlos and Tangerine Dream. Because no original instruments are used, but computer-generated replicas, everything sounds different from back then. Therefore I always have all sounds available at the same time, can play as many voices as I like (the Minimoog could only play one tone at a time), can also set the tuning freely and change it constantly. The sound is deconstructed and reassembled. By the way, the players are not keyboard virtuosos, but virtuosos in dealing with electronic sounds.

The piece consists of thousands of atoms. The music is analytical-emphatic. It is put together in the laboratory; when composing I wear a white coat. But a concert is not an experiment. The moment I no longer understand what is happening, art is created. The beauty lies in the excessive demand.

Since its foundation in 1997, ensemble mosaik has developed into a renowned ensemble for contemporary music as a particularly versatile and experimental formation. Its members are distinguished not only by their instrumental abilities, but also by their creative individuality and joy of experimentation. In many years of collaboration, they have created a distinguished ensemble that demonstrates openness to the most diverse concepts of contemporary music at the highest artistic level.

The ensemble’s activities are characterized by close collaboration with young composers and the integration of digital media in the areas of composition, interpretation and presentation. Preference is given to an egalitarian way of working in an exchange with all actors involved in a concert project. By opening up working processes, creativity is bundled and intensified. For years, ensemble mosaik has worked continuously with many composers, thus enabling music to be developed over long periods of time in a collaborative process.

A particular focus of the artistic work lies in the examination of new approaches to performance practice, for example through the integration of scenic and visual elements, and the testing of new concert formats that reflect individual works in the context of an overall context, focus current trends and test new perspectives. In cooperation with artists from other fields or musical genres, the concerts themselves become experimental arrangements.

Enno Poppe, born 1969 in Hemer/Sauerland. Studied conducting and composition in Berlin, among others with Friedrich Goldmann and Gösta Neuwirth. Numerous prizes and scholarships. Worldwide performances of his works. Internationally active as conductor.