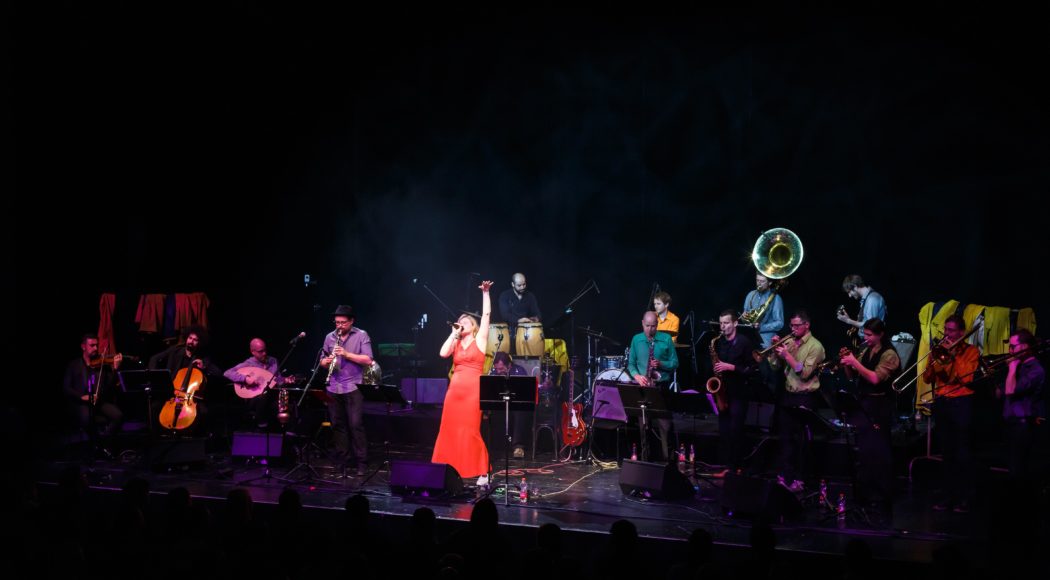 Purchase the CD of the concert here.

From April 11, we will continue online with TONLAGEN – 30th Dresden Contemporary Music Days.

In addition, our online archive contains a variety of recordings, interviews and short films, including the concerts of the Feature Ring series, the web series Composer Genau! with John Moran and Josh Spear or the music videos of Bandstand 2021.

We are showing a concert film which was recorded and produced in HELLERAU and will be shown online for the first time on Saturday 13.06.2020 8:00 pm by the Volksbühne Berlin.

Banda Internationale, the protest experienced brass band, which toured Dresden’s first reception camps in 2015 to welcome escaped musicians into the band and Bernadette la Hengst, the pop-agitation chanteuse from Berlin, know each other from various demonstrations and actions against Pegida, Höcke and others.

Both always had the utopia of a cosmopolitan coexistence in mind, bringing people of different origins together and working on the common ground: Diversity instead of leading culture and a togetherness instead of anger and disappointment.

Flight and expulsion is a phenomenon as old as humanity itself. No one leaves his home country, his language, his culture lightly. Bertolt Brecht, the poet and playwright from Augsburg, also found it difficult to leave his homeland and thus also his language area. His writings are full of the pain of exile and the shame of his German origins:

How do you sit sullied

Banda and Bernadette are gonna go have a go at this Brecht guy.
They will brush him with and against the line and also exchange his horrible cigar for a proper shisha.

In short: Pop against the right wing and international brass music for everyone!