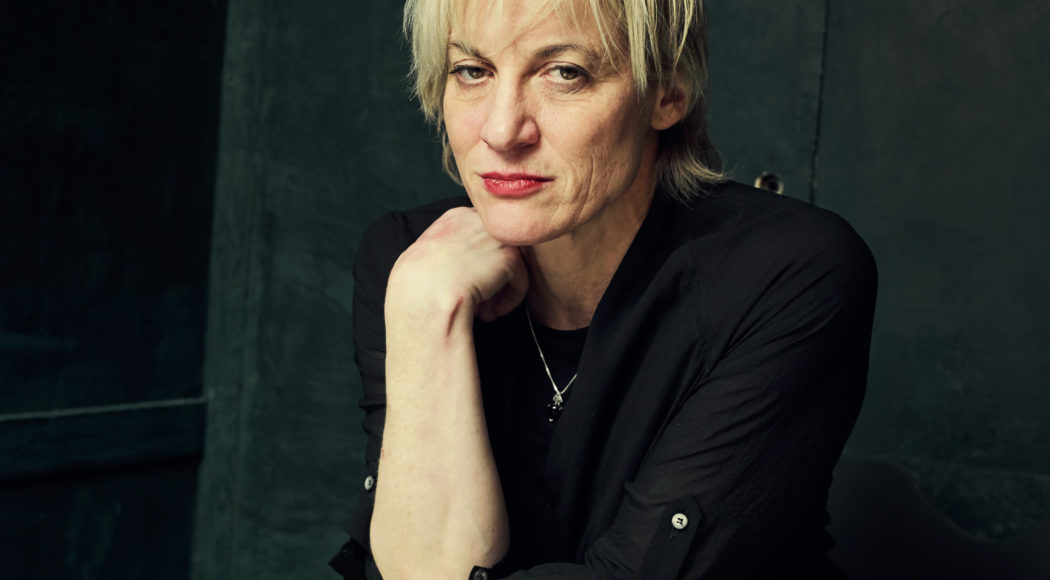 Hans Ulrich Obrist in conversation with choreographer Meg Stuart about rituals, improvisation and ecstasy. Abridged version; the full article appeared in the magazine of the Federal Cultural Foundation # 30 Spring/Summer 2018.

Hans Ulrich Obrist: Ecstasy, transcendence and endurance are exciting topics, because I think there is the idea behind them that art is a kind of portal through which you have to pass. But first I would like to ask you how it all began for you. How did you get into dance and choreography, was there some kind of awakening experience?

Meg Stuart: I grew up in the theatre, that certainly played a big role. My parents are both theatre directors. Seeing a lot of plays, being able to watch dancers and actresses closely, that left an impression. But somehow I never wanted to act, I never wanted to portray characters, I wanted to be myself. At first I did a lot of sport, I ran, the physical was important, and so it happened that I approached dance more and more, and at some point I let go of running. And then I went to a dance class in high school that wasn’t about learning to move like others – although I did that too – but actually about choreography. That’s where I did choreographic studies – standing, sitting, lying down – studying the different parts of the body, the whole body up and down. And then I kind of started making up dances before I really knew how to dance. I didn’t have a technique that I would have had to unlearn later, but rather had to build a structure and technique around myself first in order to implement the things I had imagined. I tried alternative techniques at the time, but of course I also studied the “modern masters”: Cunningham, Graham, Limón. I don’t know if you can call that a revelation, but that’s how I started.

HO: You are originally from New Orleans …

MS: Yes, I’m from New Orleans, but my breakthrough as an artist was at the Klapstuk Festival in Belgium with “Disfigure Study” (1991), when I was 26 years old. By then I had already done a series of smaller studies in New York, which then came together in “Disfigure Study”. With this first full-length piece, I then had a foot in the European scene.

HO: So you only really found your own “language” in Belgium. The first piece of yours that came to my attention was No Longer Readymade (1993). It was very well received in the art world. What was “No Longer Readymade” about?

MS: It was my second piece, and maybe it came out of a crisis. Making a second work while I was on tour with the first one, getting a lot of attention very quickly, moving out of New York and getting into the European festival scene – it was quite a lot at once. The core of this work is a solo. I’m digging through the rubbish in my pockets, receipts and coins and things like that, I’m sort of dumping the remains of a life on the floor. […] This time it was a whole new engagement with the question: Here I am, what now? […] It was the first time I explored physical and emotional body states. The piece begins with the dancer, Benoît Lachambre, shaking his head violently for about 4 1⁄2 minutes and then gesticulating feverishly. Then he starts shaking again and does the whole thing backwards. He’s completely out of control, he’s blurring like he’s in some kind of Bruce Nauman video, he’s pushing his limits, but he’s articulating himself in this madness. When we started rehearsing this scene, he threw up in the studio. Only after many rehearsals was he finally able to perform it. It was the first time I was interested in fever or sweat – could that be a “language”? How do we use these kinds of involuntary bodily reactions as dance material? So I started working with physical and emotional states choreographically.

HO: This piece seems to go beyond the rational, irrational forces come into play. Andrei Tarkovsky once said that we need to reintroduce rituals because they have disappeared in the modern world. It is interesting that ecstasy is seen as something very positive in indigenous cultures and also in a ritual context. But in capitalism and in our globalised world, at some point people started to connote it negatively. In your work, it clearly has a positive connotation. I was wondering when that entered into your work. When you started doing it, it must have been quite unusual, right?

MS: I think from a Western perspective, rituals are things we do out of habit, though not by choice, but we are constantly engaged in rituals. We create them for ourselves – we are forced to participate in others’, we are constantly surrounded by rituals. So it’s about acknowledging them, but also about reinventing them. We are influenced daily by what we see, our consciousness is flooded with information. The question is how do we deal with it, how do we free ourselves from it, which thoughts are ours, which are not, and how can we work with these forces? […]

HO: Your piece “Until Our Hearts Stop” (2015), which I saw in London, is also very impressive. It also has to do with this other condition. Because there, as in the earlier pieces, you often use the concept of exhaustion, and how exhaustion can lead to a transcendental state …

Exhaustion is either a desire or a problem, but it can also be a strategy to make art.

MS: … or to a nervous breakdown (laughs). But I think we also like to be exhausted, I think exhaustion is a state of being in the moment, it’s our neoliberal mode, this idea of always working. It’s also about going through exhaustion to reach a higher state of consciousness where more subtle frequencies resonate. Exhaustion is either a desire or a problem, but it can also be a strategy, a strategy to make art. You say to someone: Look at this, look at it, now look at it again, and again …. no, this painting is not finished. This intensity, this obsession with stretching time and thus forcing people to be hyper-present – that’s where I see the responsibility of art at the moment. To insist that we account for where we are.

HO: Where do you see the boundary between dance that is performed on stage and ritual practices, such as those of the shamans or shakers, that take place beyond a stage?

MS: In dance on stage, a set of principles or rules are shared with an audience. Shamanic practices and rituals are about specific goals and the good of the community. Shamans are guided by spirits to other worlds to heal people from the community. This is a service to society. When people go out to party in clubs at the weekend, it is a kind of improvised dance ritual that is about meeting, letting go and sharing moments of ecstasy. Nevertheless, even at places like Berghain in Berlin, there is a relatively rigid code of conduct. I can therefore well imagine that in the future there will be more and more hybrid, undefined, open places where people can dance together, let go, articulate themselves and thereby create strategies of coping and healing. I hope that the Dance Congress in Dresden will be such a vibrant, unconventional place for collective action and shared purpose. It will be a five-day gathering, convoluted and magical, functioning as a kind of social choreography within which to meet, exchange, argue and change. A deconstructed rave and other forms of social gathering and dancing are essential. The rave should start early in the morning in the huge hall in Hellerau. It is then a charged political place where the conventions of nightlife have no meaning. A space where people can express themselves in a completely uninhibited way because there is a different kind of receptivity. In this huge cave, I want to create something that is in flux, that changes gears, so that at some point the music slows down, then stops altogether, and another space emerges where people are present and listening in a different way.

HO: The Dance Congress is also a kind of utopian undertaking. There were not many congresses of this size – in the Weimar Republic in 1927, 1928 and 1930. What kind of rituals will there be at the Dance Congress? MS: I’m very interested right now in the Monte Verità meeting in Switzerland in 1917, where spiritualists, anarchists and artists came together on this mountain to discuss alternative models of life. At the first dance congress in 1927, there were heated arguments about things and definitions that are unthinkable today, for example, what dance is in the first place, what a dancer should be like or what use dance has. There is also always talk of the big party at the end where everyone got together. I would have loved to have been there! I am interested in the social dimension of dance, dance history, sacred dances, contemplative music and performances, martial arts. It is important to me that the dance is not just the warm-up for the discourse part, but that both are integrated into the same format.

HO: I am currently dealing with the phenomenon of dance mania, also called choreomania or St Vitus’s dance, which occurred in Europe in the 14th and 15th centuries. Ordinary people in the cities, not professional dancers, danced and danced until they fell down from exhaustion. There was such an outbreak in Aachen in 1374. Wouldn’t it be great if the dancing mania broke out in Dresden?

MS: … or a talking mania! When I change my state of consciousness very quickly and focus my attention on something else outside the present moment, I have the feeling of suspending the laws of time and space, of moving through other dimensions. I believe there is a truth that one arrives at through body techniques. Dancers know this, but it should also be understood in other fields: how certain movements change our consciousness. In Hellerau there is this big garden area and I hope we can create common rituals there, for example to cook together and try out other forms of exchange. There will certainly be different forms of coming together and celebrating, but also of coming together and mourning. Dresden will not be a five-day party. The congress will have a dramaturgy in which there is room for all kinds of things, for meditation and movement, but also for conversations about non-violent communication, for example, and justice, or about the power of thought.

Meg Stuart, born in New Orleans (USA) in 1965, is a dancer and a world-renowned choreographer. In 2018, she received the Golden Lion of the Venice Biennale for her life’s work as well as the German Dance Award for Outstanding Female Performer. This was in recognition of her outstanding role in the development of contemporary dance. The Federal Cultural Foundation was able to convince Meg Stuart to take over the artistic direction for the triennial Dance Congress, which will be hosted in Dresden in 2019. Meg Stuart lives and works in Berlin and Brussels.

Hans Ulrich Obrist, born in Weinfelden (Switzerland) in 1968, is a world-renowned curator of contemporary art. He has been Artistic Director of the Serpentine Gallery in London since 2016. For more than 15 years, Obrist has been running his “Interview Project”, an extensive collection of interviews with artists, musicians, architects and filmmakers.

5-10.6.2019
Tanzkongress 2019
A Long Lasting Affair
www.tanzkongress2019.de
An event of the Federal Cultural Foundation. In cooperation with HELLERAU – European Centre for the Arts, Goethe-Institut and DIEHL+RITTER. Supported by the City of Dresden.
Artistic Director: Meg Stuart