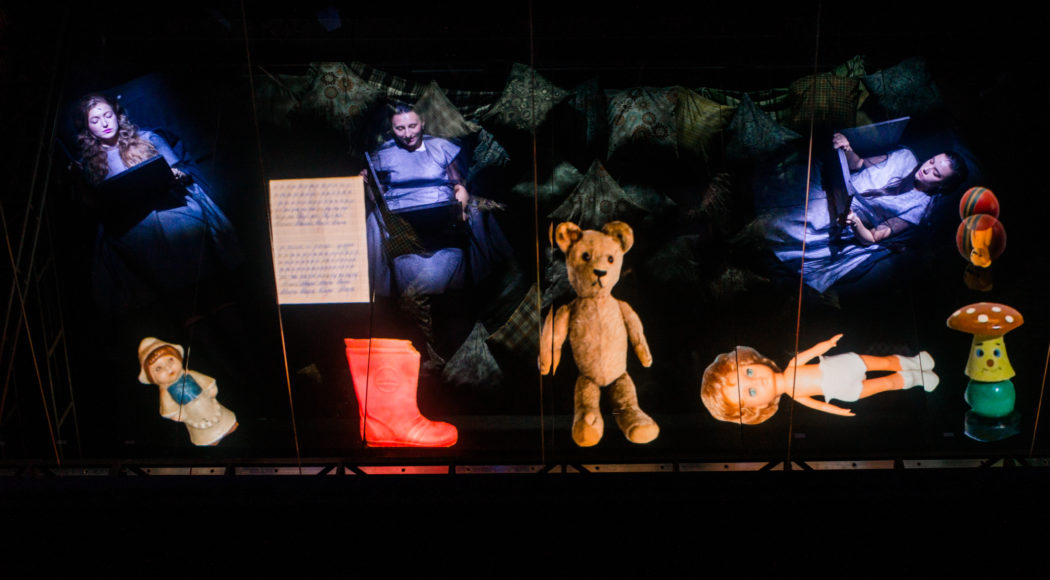 The dramaturges Moritz Lobeck and Johannes Kirsten in conversation with Vladimir Rannev about his opera “Prose”.

How did the idea come about to combine two stories for an opera – Yury Mamleev’s “The Bridegroom” and Anton Chekhov’s “The Steppe”?

The starting point was Mamleev’s story, which he wrote in the 1970s while emigrating to the USA. It basically tells of a car accident and its consequences, and for me it thematises evil in itself. A man, Vanya, has run over the Kondratovs’ seven-year-old child. They see a way to deal with the loss by “adopting” Vanya. He then makes himself at home in the family. But I quickly realised that you can’t just set this narrative to music and sing it. It wasn’t enough for an opera. I had to find something else. In Chekhov’s “The Steppe”, the boy Yeguroshka says goodbye to his mother, to nature and to everything good. He goes to the city to stay with relatives. He enters the world of adults. Childhood is over. The last line says, “What will life be like?” And we understand, it won’t be good. My idea was that Yegorushka by Chekhov and Vanya by Mamleev are one person. Yegorushka came into the hard world and after ten years he settled in. He has understood how everything works and that the world is bad. He understands: to defeat this bad world, he has to be even worse. In Chekhov’s work, I deleted all the people and left only 13 pages of nature description from the original 110 pages. From these texts, a very dense vocal soloist facture with many counterpoints and polyphonic voices has emerged, which Arina Svereva has wonderfully realised with the vocal ensemble. If you don’t understand everything, that’s no problem. Mamleev’s narration is perceived and read with the eyes and Chekhov’s text is sung and heard. Both happen at the same time. Chekhov is just a word ocean and everything together is a permanent overload for the audience.

I saw the play in Moscow, understood rather little of the text, but I still found it almost hypnotic. How would you describe the music?

It gives an excited context to both stories and ties them together. The words of Chekhov are sung. They are a bridge and at the same time they form a frame. Without this frame, it would not be such an exciting and intense plot.

The production works very much off a Soviet aesthetic that is simultaneously put through the meat grinder of a pop context. Can you say something about this aesthetic setting of the opera?

Just look at how it’s going in Russia at the moment. There is a great nostalgia for the Soviet Union. We were strong. People were afraid of us. Everything was stable. All that shit. All the artefacts of that time are coming back. When we were working on the images, we wondered if it wasn’t too illustrative. We then decided to be hyper-illustrative. There are so many artefacts to be seen that it creates a stream of objects where the energy of that stream is more important than the content it conveys. But maybe take a step back. I was faced with the question of how best to convey Mamleev’s text? Should it simply be projected? I then remembered the work of the artist Marina Alexeeva. She makes small boxes with a mirror that create an effect: the video image projected onto the mirror hangs in the air and can communicate with real objects behind it. We then transferred the principle of the video boxes to our stage set. Marina worked on the video with Mamleev’s narration and only heard the first notes two weeks before the premiere. We worked in parallel without knowing what the other was doing. We see the mother saying, “Vanya wake up!” but she sings screaming fortissimo. That is in stark contradiction to each other. But that was the idea, that a strong contradiction arises in the juxtaposition of the levels.

So, for you, the aesthetic setting did not arise out of the story, but you saw these boxes and thought that would be a possibility for the opera?

Yes, that was the possibility to bring everything together. There are such two-component weapons. Each component is harmless on its own, but when the two combine, the result is an explosive mixture. The video image in the mirror, the stage setting and the actions of the singers, which I see through the mirror, come together to form a complete picture.

“Prose” was produced by Elektroteatr Stanislawski. Is it the programme of this theatre to make such experiments possible?

The theatre used to interest no one. Moscow’s cultural mayor Kapkov then gave it to Boris Juchananov a few years ago, who breathed new life into it with post-dramatic theatre. His theatre is multidisciplinary. That’s why he invited me to do an opera there. We discussed who should direct it and I said I would actually like to do it myself. At first he was reluctant. Heiner Goebbels, Romeo Castellucci and other well-known directors work there. A month later I presented a small box of Marina to show how the stage should look. That impressed everyone, and at the next meeting we started talking about the concrete organisation.