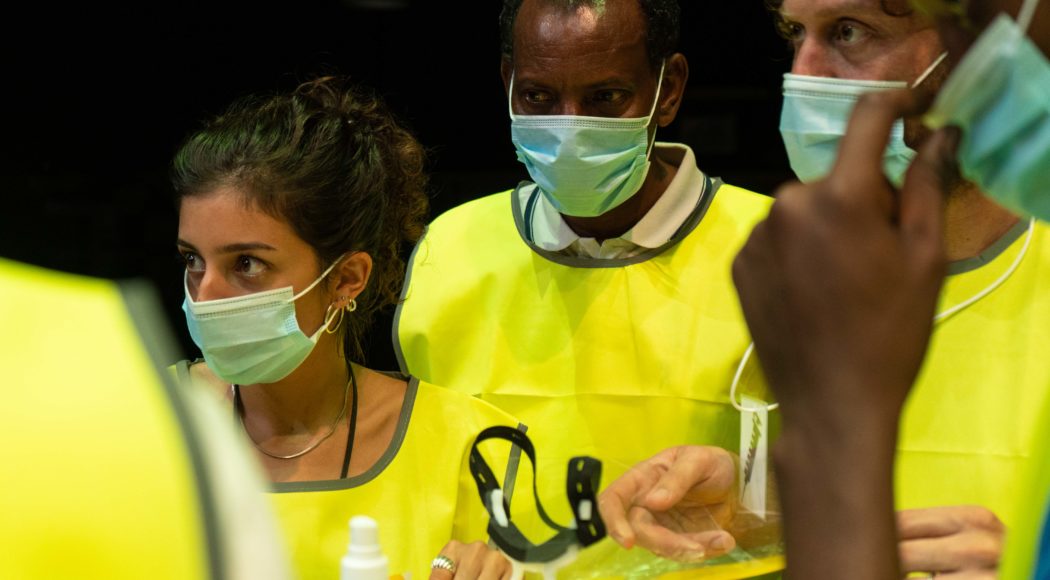 Since 2018, based on the experience of the EBOLA epidemics in Africa, scientists have been carrying out simulations that have been tested on people in the field (ministers, hospital managers and security forces) in various countries in North-West Africa. All of them are professionals, yet they were all baffled when it came to managing the unmanageable. In the beginning of 2019, we accessed the scenarios used for these simulations. We copied them and used them to develop a simulation game, scientifically validated, in collaboration with the doctor who created the original simulations, and with game developers. The simulation game works for a group of players between 40 and 100. There are no actors, just two coordinators who guide the players through the game. When entering the room, the players choose to join one of the 8 groups listed below and put on a corresponding colored vest, before joining their table, their « base ». The groups are:

Within their group, they receive a charter with their professional imperatives. The game takes place in 3 phases, which correspond to the 3 phases of development of a pandemic. Between each phase, representatives from each group meet at the crisis meeting table to communicate the progress of their group work and make decisions together. The consequences of all these decisions change the course and outcome of the game: 4 possible future scenarios. We finished the creation of the first version of this game in November 2019, before the arrival of Covid-19. Of course, we were impressed by how reality took over. From the very moment Wuhan started to be quarantined, in December 2019, all the things we learned theoretically became true. We thought the game lost its meaning and was to be discarded. But then we went through the material, again and again, to see how and if it still « works ». The game seems completely resilient to the paradigm shift that today’s situation has created. We believe this is possible due to two main things: the precision of the simulation model by Doctor Philippe Cano – everything that has happened or is still happening is without exception in his original simulation from 2018 – and the incredible quality of the adaptation work by the game developers, Théo Rivière et Corentin Lebrat. The meaning of the game is changing though: it is no longer a dystopian anticipation game, but a cathartic, digesting one. We didn’t change anything in the basic material of the game. Everything was and is there. We just added a more complex role to the group of representatives of the civil population. Indeed, in the original simulations they hardly exist – but during the first lockdown we realized how everybody thought about the world to live in afterwards, how everybody had opinions about the ways countries managed pandemics, what kind of lock-down to choose etcetera. Now, VIRUS gives space to utopia, to the prospect that another world can come out of a pandemic. Are we ready to give up flying as often as we used to?  Can we afford not to have seasonal foreign workers growing and picking our vegetables for a paltry wage? Can we do better than the governments in handling a pandemic? Can we establish other forms of government? Can we create a better world? We played so far in The Netherlands, Germany, Swiss-Germany and France. It’s incredibly interesting to see how different societies appear, some ending in dictatorships, others in utopic forms of governing. It is fun to see how popular votes are proposed by the players, or questions or subjects added to the public debates that take place. The most stimulating part of the game is now indeed in how the players take the game over, on how they play WITH the game. That’s something I like a lot, in my work in general, to see how a group of people can USE a piece for or in society. Can we create a better world? Well, in VIRUS, we can.

July 2021
VIRUS
Yan Duyvendak (CH)
Performance
Funded within the framework of the Alliance of International Production Houses by the Federal Government Commissioner for Culture and the Media.