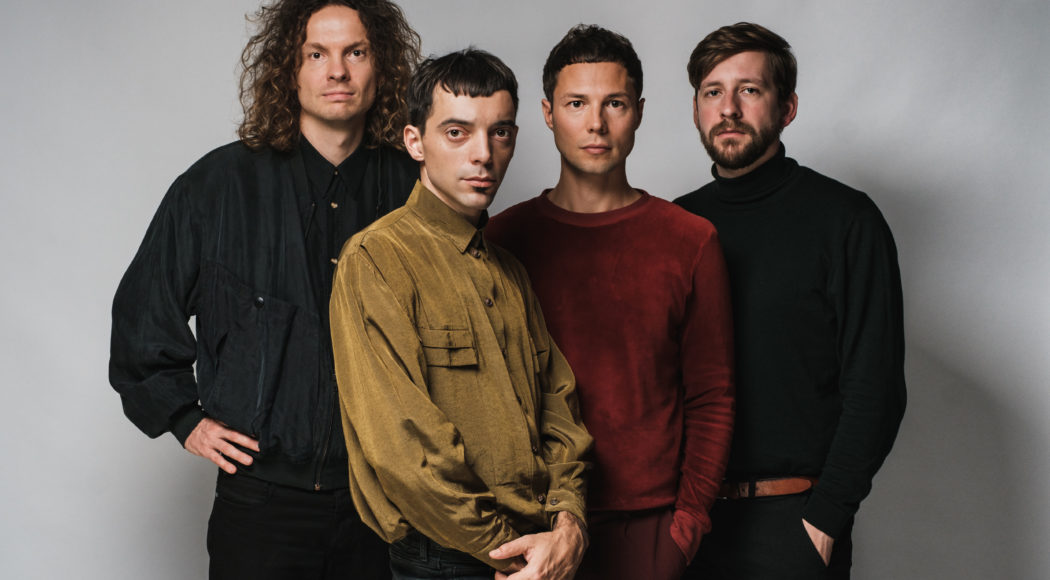 The work has begun. Is projection surface, back door, memory, cunning, a dancing skeleton in Vienna. The work flushes you out of the doors. Beating for the manipulative mega-mass. Judged with tender violence. Today ideas are made.

The Dresden music group Die Arbeit creates with reduced guitars, beats on the point, German-language poetry and propaganda a pleasing monotony ála “German American Friendship” or “Joy Divison”. Manufactured as if in a workshop, the quartet installs its own social criticism in the midst of a capitalist shambles. An oscillating revival experience between building up and tearing down.

DIE ARBEIT is a music group from Dresden,which plays German-language postpunk and wave. The quartet was founded in early 2018 and has since left its mark in many corners. After their first single and video releases, they collaborated with the dance and theater artists of JuWie Dance Company on performances in public spaces. A concert at the Festspielhaus Hellerau – European Center for the Arts – was recorded and the resulting video material was used for the scenic accompaniment of a film and audio installation on the occasion of Arthur Schopenhauer’s anniversary year. At numerous individual and festival concerts as well as support slots for FREUNDE DER ITALIENISCHEN OPER, WOLF MOUNTAINS, VIZEDIKTATOR and FRUSTRATIONS as well as a performance in the JVA Zeithain, DIE ARBEIT was able to convince with its prose and timbre and quickly find allies.

The foundation of the band’s sound is formed by driving drum beats, which stand on a solid base of bass guitar. German lyrics are accompanied by a reduced and flat guitar sound and merge into a dynamic unit. DIE ARBEIT project into their recipients an intense experience of fun and compulsion, security and uncertainty, buildup and demolition, amplification and reduction. The band’s songs are created during prolonged jam sessions as working sketches that are woven apart until a thematic foundation emerges. This is expanded brick by brick until everything comes together to form a new work.

In February 2020, the debut album Material was released on UNDRESSED Records. Fans and press received the debut work extremely positively and predicted a prosperous future. The album convinced its supporters and the relevant channels so well that the first pressing was sold out after only a few weeks and was titled as a coming classic of German post-punk history. The virulent start with the new record was followed – in the middle of the record release tour – by the equally virulent Corona lockdown. After introverted time in the rehearsal room DIE ARBEIT has gained even more strength and is ready for the second material live wavein 2021, which will carry them throughout Germany and parts of Europe. Also a second album is in the offing…