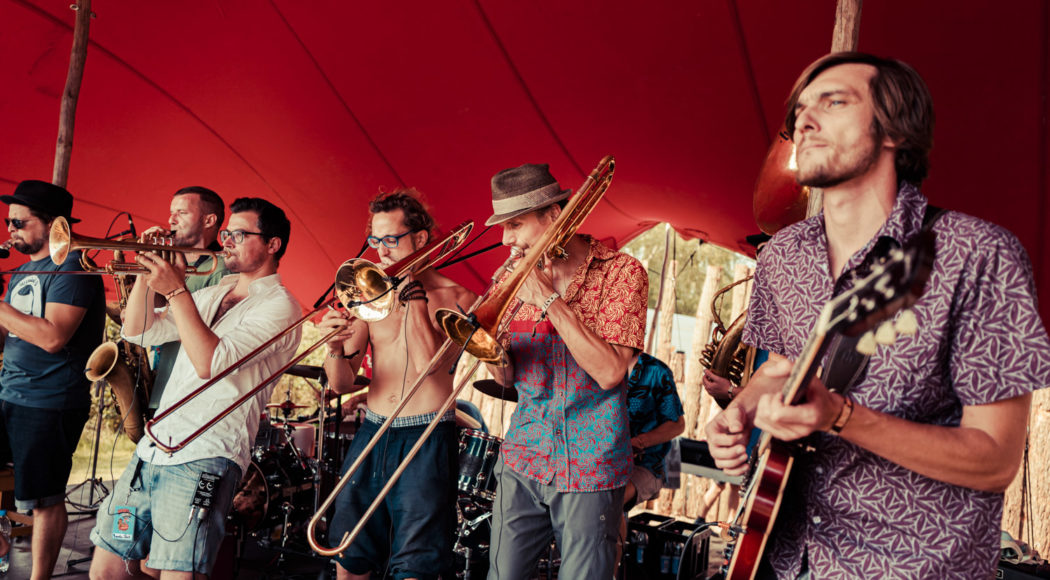 The brass band Banda Comunale has been making music in Dresden for 20 years. We help ourselves uninhibitedly to the cultural heritage of supposedly foreign countries and peoples. Our repertoire largely contains music from the world’s crisis regions: North Africa, the Balkans, the Middle East, Colombia, West, East and Central Africa, Eastern Europe.

Two topics have particularly moved the city and thus us in the last four years: the xenophobic PEGIDA walks and the fate of the many refugees who are also seeking shelter in Dresden.

After more than 40 concerts against PEGIDA, against “No to the Home” initiatives and for refugees in initial reception centres in Dresden and the surrounding area, we decided to go one step further: in 2015, we started the project Banda Internationale with refugee musicians in our city.

The now almost 20-member collective with musicians from Germany, Syria, Palestine, Scotland, Brazil, Italy, Russia, Poland and Iraq has since won numerous prizes and played more than 400 concerts in Dresden, Saxony and Germany. The great, common goal was to reinterpret native music, to open hearts, to break down prejudices and resentments and to contribute to understanding between new and old-established Saxons, Germans and Europeans.

Regionally, supra-regionally and even outside Germany, the project is being followed by an ever-growing audience, numerous reports in the press have reported on the model character of “Banda Internationale” and made it clear that music is a key to integration – also and perhaps especially in Dresden and Saxony.

Banda Internationale encourages many people – the refugees, but also the people of Dresden, Saxony and Germany, who are committed to a culture of welcome. This is also recognised by the Federal Government:

Banda Internationale was among those nominated in May 2016 by the Minister of State for Culture, Monika Grütters, for the new special prize for projects for the cultural participation of refugees and received 1st prize.
In 2017, the collective was awarded the German Promotional Prize for World Music in Rudolstadt and received two further awards with the prize “for social and cultural equality of all people and their understanding” from the Philip Morris GmbH initiative “Power of the Arts” and the EUROMED Award 2017 “Totem for Peace” from the Anna Lindh Foundation.
In 2019, the ensemble was honoured for its music education projects in the competition “Active for Democracy and Tolerance” by the Alliance for Democracy and Tolerance against Extremism and Violence.
Since 2017, the collective has been running music education projects with children and young people at Saxon schools and youth centres as part of the Integrative Measures.

In 2018, the band undertook a trip to the country of origin of one of its musicians and visited numerous schools and educational institutions in Burkina Faso. We support our singer Ezékiel Wendtoin in building a school in Ouagadougou.

The band has so far released the album “Kimlik” (2017) on the Munich label TRIKONT and made the documentary “Wann wird es endlich wieder Sommer” (2018) with the collective Hechtfilm, which was shown at DokFilm Leipzig.

In addition to the “100th German Catholic Day” in Leipzig, the “Saxon Culture Days” in Wroclaw, the “Heimatsound Festival” in Oberammergau, the “Jewish Achava Festival” in the Thuringian state parliament, the “Morgenland Festival” in Osnabrück, the Oktoberfest in Munich or the official celebrations of “30 Years of Peaceful Revolution – Fall of the Wall” in front of the Brandenburg Gate were on our official concert list.

However, it was clearly more important for us to play in places like Freital, Bautzen or Plauen, which have been synonyms for publicly acted out xenophobia and right-wing extremist attacks for months.

This is where we continue to see our most important field of activity: from now on, making music together in a double line-up against right-wing extremism, prejudice and exclusion.

Due to the close cooperation with musicians from many different cultures and also the experience gained in the last two years with intercultural, music education work with children and young people, in 2018 we undertook a trip to the country of origin of one of our musicians and visited numerous schools and educational institutions in Burkina Faso.

Through collaborations with the Landesbühnen Sachsen, the Dresden University of Music “Carl Maria von Weber”, the Philharmonie Dresden, the Staatsschauspiel Dresden and renowned musicians such as Sting, Smudo, BAP, Jan Vogler, Katharina Franck, Yo Yo Ma, Hans Söllner or Konstantin Wecker, the refugee musicians gained diverse experience and established themselves as professional and sought-after musicians in their new homeland.

In Saxony in particular, where we live, work and perform, our collective continues to see its integral sphere of influence and, as part of the integrative measures funded by the Free State of Saxony under the auspices of the Ausländerrat Dresden e.V., carries out an independent band project with unaccompanied underage refugees, workshops in socio-cultural youth facilities and schools throughout Saxony, and promotes and supports these with a concert tour for the entire band. In 2019, we were granted three years of funding for integrative music projects.

Here are some links: