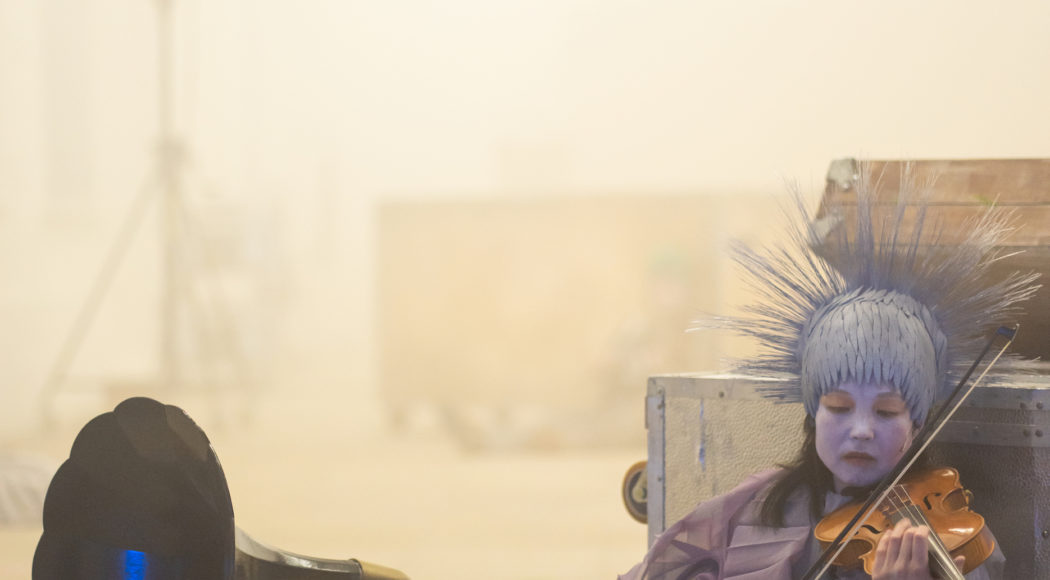 What can a (new) beginning look like in the face of drastic global changes and crises, ecological challenges and the consequences of the pandemic? This is the question that the soloist ensemble Kaleidoskop and musicians of the Lower Saxony State Orchestra Hanover address together with the director and choreographer Ben J. Riepe and the Icelandic composer Bára Gísladóttir in “Beginning”. The project is part of a double-pass cooperation funded by the German Federal Cultural Foundation, in which the soloist ensemble Kaleidoskop, the Hanover State Opera and HELLERAU are exploring new forms of presenting classical orchestral repertoire. After Mahler’s 9th Symphony served as the basis for “Abschied” (premiere at HELLERAU on 02.10.2020), the first part of this cooperation, Ludwig van Beethoven’s 9th Symphony, another monument of orchestral literature, is the starting point for “Beginning”, the second part of the cooperation.

Beethoven’s symphony marked an artistic turning point in its time and is the intellectual basis for examining current upheavals. Under the direction of Ben J. Riepe, six Kaleidoskop soloists have joined forces with six musicians from the Lower Saxony State Orchestra Hanover to form a temporary performance ensemble that will not only perform musically, but also in action and movement on stage. “We are in a kind of turning point between crises, in a transformation process in which everything is in motion. What can be our role as human beings in this?” asks Ben J. Riepe, thus also describing the initial situation of the project: “With all artistic means, I would like to vision a beginning with the musicians as stage actors: How and what can this ‘new world’ be? What baggage, what archive, what ballast perhaps, but also what possibilities do we bring with us from the past to shape the future?  What do we have to say goodbye to for good?  […] We will make this ‘baggage’ visible in the literal sense of the word, because we will work with boxes with different contents, which already formally allow many associations: Time capsules, archiving boxes, instrument cases. […] The starting point of my rehearsal work was the breath, as an instrument and communal practice, because it connects us both with each other and with nature, and in music it is both a sound generator and a marker of community and togetherness.”

In addition to these pressing questions and artistic positions, the project, as part of the Fonds Doppelpass funding project, also touches on important structural issues of current artistic production. The aim of the fund, which has supported about 100 projects with a total of more than 22 million euros in 10 years, is to strengthen equal artistic cooperation and to jointly test new, tourable forms of cooperation between the independent scene and theatre institutions. “With regard to the goals of the fund – the opening of the municipal theatres and the upgrading of the independent scene – I am convinced that the Doppelpass Fund has taken up a development process, i.e. the increasing permeability of the borders between municipal theatres and the independent scene, and made it sustainably dynamic.  The regular working meetings in the fund also testify to the growing interest and mutual understanding for each other,” explains Sebastian Brünger, who supervised the Doppelpass Fund for the Federal Cultural Foundation until its conclusion in 2022. His final assessment would be more ambivalent, however, on the question of whether the Doppelpass partnerships were able to combine their working methods productively and on an equal footing: “If this was indeed the case in the majority of partnerships, then it was mostly because the independent groups adapted to the houses rather than the other way around. And of course there were individual projects that fell short of their own expectations, but it’s all about experimentation and there are very few actors who say in retrospect: ‘Never again’. In addition, the Doppelpass Fund has reinforced an important development in the German funding landscape for the independent scene, which tries to avoid the hamster wheel of pure project funding and which has shifted the focus to multi-year funding or funding independent of results,” adds Brünger.

Above all, the Doppelpass Fund has also been an important discourse amplifier, has given concrete impulses and made exemplary projects and experiences possible.  Last but not least, the pandemic and the discrepancies between the independent scene and art institutions, which are once again becoming more apparent in this context, point to the necessity of continuing to look for models and solutions, towards a real (new) beginning – both on, in front of and behind the stages.

As part of the NEUN project in collaboration with Solistenensemble Kaleidoskop, HELLERAU – European Centre for the Arts and the Hanover State Opera, funded by the Fonds Doppelpass of the German Federal Cultural Foundation.