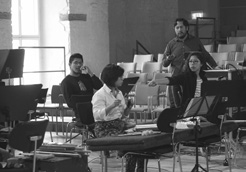 What do democracy and the explicit reference to origin have to do with musical avant-garde? EM and OEIN will provide information Democracy and artistic creativity are a difficult pair. On the one hand, the right to freedom of activity is indispensable for the development of ideas and concepts; on the other hand, their implementation often requires a trace of dictatorial stringency in order not to escalate into unintentional chaos. The right mix of these factors enlivens the art of every modern. And even the reference to original origins does not necessarily mean vain navel-gazing and tumb nationalistic self-reflection, but can preserve traditions in order to lead them into a future open to the world. Two at first sight (and at first hearing anyway) very different ensembles have been pursuing just this ambitious approach for forty years now and have developed their trademarks from it in their own unique form. The abbreviations EM and OEIN will probably only appeal to intimate connoisseurs of the scene. But when the Ensemble Modern is mentioned, it is not only experts who listen. Since its foundation in 1980, this unique ensemble has stood for an almost unbounded creativity that explores democratic principles, expands them and constantly calls for new and unlimited possibilities. Just in time for the anniversary, however, the ensemble, which has been based in Frankfurt am Main since the mid-1980s, was hampered by a completely amusic pandemic, had to cancel concerts and withdraw to the virtual, virus-free space. The Bolivian Ensemble OEIN was even more affected by the crisis, because this Orquestra Experimental de Instrumentos Nativos was surprised by concert cancellations and travel bans far from its home country. Together with the voice collective PHØNIX16 it was supposed to open the MaerzMusik in Berlin and perform in HELLERAU immediately afterwards, but instead was stuck in German quarantine for almost three months. Far away from family and friends*, but at least in Rheinsberg Castle, where the members of this project orchestra continued to work on and pre-produce their spectacular world premiere program. Some of the musicians* around Carlos Guttierez were even abroad for the first time, so they found themselves in an exceptional situation in several respects. OEIN unfolds its power of fascination above all through the combination of a traditional Andean instrumentarium with contemporary works. For four decades now, they have been saving indigenous music from oblivion by travelling the country and having traditional playing techniques demonstrated on a predominantly handmade instrumentarium, in order to expand this world of sound with new and experimental forms of expression. Beyond that – and this is again highly democratic! – this ensemble also pursues an educational mission by giving children and young people from the most diverse social backgrounds access to music. At the 4:3 festival in November (see also text on p. 22) the Rheinsberg OEIN recordings will be presented in audio installations. One can also hope for a repeat concert with Ensemble Modern. The Ensemble Modern, which has been a regular guest at HELLERAU in recent years, is a primary rock of an ensemble that combines open sound with playful perfection and explicit daring. It will return to the Festspielhaus in January 2021 for “Happy New Ear”. With its soloists* now coming from nine countries, EM was originally scheduled to celebrate its 40th anniversary in the spring of 2020, but then only the word pair “Cancelled” appeared on the bulging diary. But hope dies last. A truism that appears in a completely new light, especially in times of an absolutely undemocratic virus. Or isn’t the C-word an expression of perfect democracy, since it strikes independently of peoples, national borders and social status? Others may answer this question. The Ensemble Modern, at any rate, wants to make up for its project trilogy “riss” by Mark Andre, a cycle of works that will be worked on in the years after 2014, exploring tonal and compositional interstices. Are there cracks between the tones, perhaps even the unheard and overheard? Does an interval or a syncopation lead to the acid test of pieces, of piece and listening impressions? Or is there not even a transition between different sides, between opposing, even unbridgeable poles in a (material) crack? Mark Andre, born in Paris in 1964, has a thirst for research that involves questioning and searching, in which the given is less to be examined than its becoming, flourishing and passing away. The composer and sound artist rather falls back on original motifs, whose deformations and eternal values he preserves, processes and – puts to the acid test? Such a rupture goes through and through and is, if not separating, if not connecting, at least mediating. What mediators could the composer and his audience wish for more than experienced experts* like Ensemble Modern? Hopefully “Happy New Ear” will soon make people pay attention to what has been missed in spring 2020. Perhaps this rupture in the constant, the familiar is a gain in experience for democracy and artistic creativity?