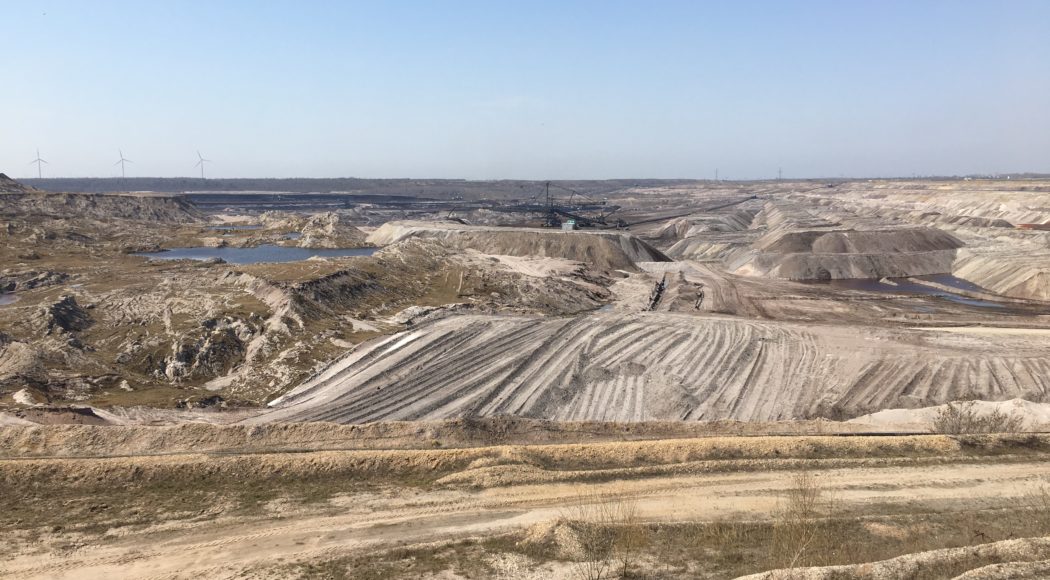 The performance parkour “Gold & Coal” by Daniel Kötter, Sarah Israel and Elisa Limberg deals with the local and global influences of raw material mining on landscapes and the coexistence of people. Two massive, widely visible interventions from different times are examined in a parallel montage: Timika, currently the world’s largest copper and gold mine in West Papua, Indonesia, and the disused open-cast lignite mining area around Leipzig. Together with the experimental musician Ikbal Lubys, the performer Darlane Litaay, the activist Agustina Helena Kobogau, the visual artist Anna Zett and the choreographer and dancer Hermann Heisig, the audience* will embark on an immersive journey through past and present energy landscapes. The artist Daniel Kötter reports about two formative encounters in the research process

We had spent two days with Mangun in the tailings, watched him and his colleagues panning for gold and listened to his stories in the evening. Together with local documentary filmmaker Yonri Revolt and our 360° camera, we spent two days documenting the overburden landscape – a 6 km wide and 60 km long strip that connects the world’s largest copper and gold mine at the Nemangkawi Peak (4884 m, colonial name: Carstensz Pyramid) with the rainforest around the mining town of Timika and the mangrove forests on the south coast of Papua, Indonesia. Grass literally no longer grows in the grey opaque, mercury-containing overburden, but the golden shimmer on the sandbanks points to the actual destination of the dreams of the gold panners who have settled here in temporary camps. There is no electricity, no drinking water, no protection against constant rain and mosquitoes – they are working for a promise for the future. Mangun had offered to lead the way and show us the safest footpath through the riverbeds back to Timika. Because it is not the chemicals in the water that are the real danger here, but the deadly currents of the river. Mangun wanted to visit his family again after two weeks in the gold panning camp. Like many of his colleagues, he had moved with them from other parts of Indonesia to Timika 10 years ago, in order to gild his future as an illegal gold panner. After a two-hour walk through the Tailings, back on the road, we climb into the first materialized symbol of the future: Mangun’s brand new compact SUV, lined with orange imitation leather and 16 loudspeaker boxes that fill us with techno as we drive through Timika. We stop in front of the small store of the only local gold dealer. On the letter scale on the counter Mangun puts his small plastic bag with the gold dust, result of two weeks of work and capitalizable geological distillate of a destroyedLandschaft.

For a moment there is an embarrassed silence during the research interview and all you hear is the roar of the nearby A38 freeway. We are sitting in the Bergbau-Technik Park near Leipzig between Markleeberger and Störmthaler See. From the driver’s cabs of the lignite excavators exhibited here, one could see the sailboats on the sulfate-containing water in the landscape holes of the former Espenhain opencast mine. For several weeks we were on the road with 360° camera and microphone in the idyllic mining succession landscapes. The white steam plume of the Lippendorf lignite power plant was our constant companion. And now we sit embarrassed between the discarded rusting witnesses of a disappearing industry opposite an older man and remain silent. Wolf-Dietrich Chmieleski, a former miner and now a tourist guide for the Verein Bergbau-Technik-Park e.V., wipes a tear from his cheek and apologizes before he continues. For an hour he had been throwing big numbers at our heads in a firm voice, which we could not really imagine: Cubic meters of spoil, cubic meters of coal, square kilometers and ton loads, lack of alternatives in the energy sector of the GDR. Then he came to talk about that moment which he recounts and experiences again on every tour of the Technology Park: the blowing up of the overburden conveyor bridge of the Espenhain open-cast mine on May 7, 1997 – the symbolic dismantling of a historical work, now disposed of on the dump of history. Chmieleski stood there with his mining buddies, only a few years after the state system break, and thus experienced the rupture in the system of his professional and individual identity. And 22 years later, in the recurring moment of memory, Wolf-Dietrich Chmieleski still has this tear running down his cheek, the result of a social devaluation of work and distillation of an individual, never officially sanctioned mourning work in supposedly flourishing landscapes.