With this declaration, the signatories want to clearly articulate the cohesion in art and culture as part of civil society against populist and nationalist movements. With this declaration, the artists and cultural workers set a socio-political signal that intervenes in our daily practice. We show together, nationwide, an attitude for tolerance, diversity and respect. At the same time, the Declaration of the Many will be presented in Berlin, Düsseldorf and Hamburg. 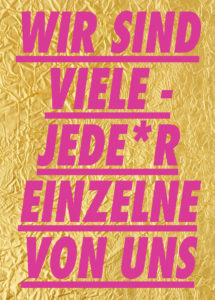 Art creates a space to change the world. As cultural workers in Germany, we do not stand above things, but on a soil from which the greatest state crimes in the history of mankind were committed. Art was defamed as “degenerate” and culture was abused nationwide for propaganda purposes. Millions of people were murdered or went into exile, including many artists. Today we understand art and its institutions, museums, theatres, studios, clubs, urban and rural places of culture as open spaces belonging to many. Our society is a plural assembly. Many different interests meet and often find themselves in between. Democracy must be renegotiated every day – but always under one condition: it is about all, about each*n individual*n! The ground on which we stand together is the Basic Law. Right-wing populism, which attacks cultural institutions as actors of this social vision, is hostile to the art of the many. Right-wing populist groups and parties disrupt events, want to interfere in the programme of events and the programme, polemicise against the freedom of art and work on a renationalisation of culture. Their contemptuous treatment of people on the run, of committed cultural creators, of those who think differently, reveals how they intend to deal with society as soon as the balance of power changes in their favour. In our federal state Saxony Pegida, Identitäre Bewegung and AfD work hand in hand and polemicize against the democratic cosmopolitan society. We oppose this. As signatories of the Dresden Theatres, Art and Cultural Institutions and their interest groups, we are taking a clear stand against these attempts:

It is about all of us. Hence: art for democracy!

Declaration of the Many

In its countless forms, art expresses the diversity made possible by a freedom of expression in societies. In its fullness, it reflects the peculiarity and individuality of the people who make it, and often opens completely new perspectives on the world to those who hear, see, feel it. Art can shape communities and identities and accompany their living change. Art, just like science, can be involved in the constant reactivation and cultivation of a self-reflexive social discourse through critical attitudes and discussions. Dresden’s cultural vitality and rich artistic creativity are for many the spirit of the city today. The freedom that makes this possible must continue to be preserved here, and it needs people who stand up for values of freedom and an atmosphere of togetherness, especially when threats are raised.

In autumn 2014, “#WOD – Initiative weltoffenes Dresden” was founded as an open association of Dresden’s cultural institutions to do just that – to jointly set an example for freedom, democracy and an open society based on solidarity. In times of increasing anti-democratic tendencies, the “#WOD” association provides impulses from civil society for a reflective, critical, but also respectful approach to our democratically constituted free society. It is precisely in these times that art and culture can build bridges, as well as where it is no longer politically possible. Dresden’s cultural institutions are common places of reflection, of enduring and testing difference and of questioning and confirming identity.