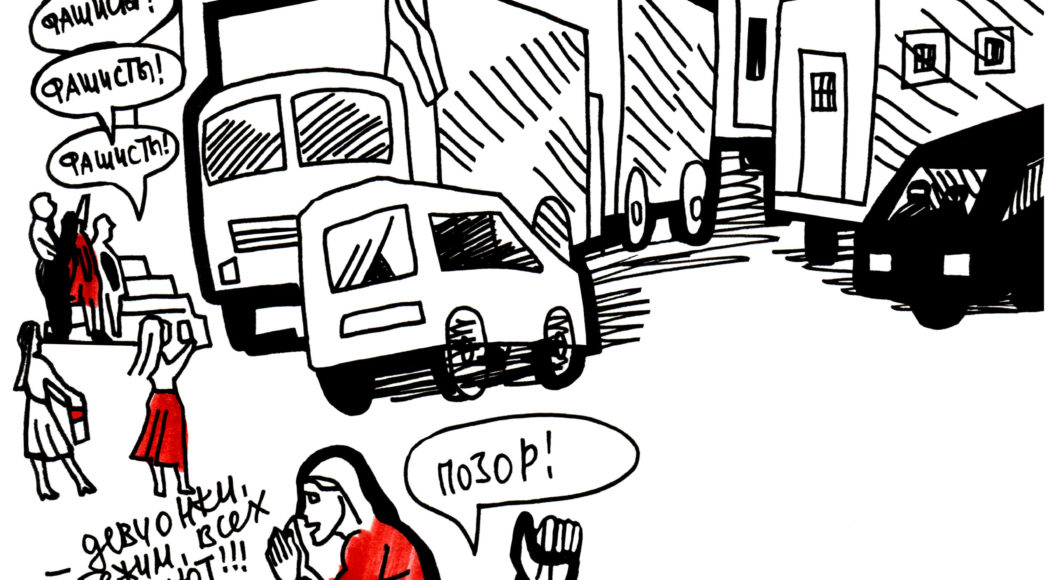 Victoria Lomasko was artist in residence at the festival “Karussell – Contemporary Perspectives of Russian Art” in January 2020. At the time, hardly anyone suspected that the following year would be so eventful: the pandemic, the protests against the rigged presidential election in Belarus, the poison attack on Alexei Nawalny. Johannes Kirsten, curator of “Karussell”, spoke with Victoria Lomasko about current events on the occasion of her drawn diary, which was published regularly from January to summer 2021.

How did you perceive the presidential elections in Belarus and the protests that followed?

For me, it is part of a big issue. A few years ago I started collecting material for a book about the post-Soviet space. During the pandemic, when the revolution started in Minsk, I changed my attitude towards the book. Before the pandemic, it was more driven by nostalgia towards the Soviet Union. But during the pandemic I suddenly got tired of being in that country with its regime and I understood so well what was happening in Belarus. Suddenly I knew what story I wanted to tell, the story of a complete liberation from the Soviet Union, a final farewell to the Soviet Union! I then went to the Belarusian embassy in Moscow. There were mainly very young people there on a solidarity action for the Belarusian protests. The whole story with Belarus and also with Nawalny is not about Putin being a thief and him having a palace and Ljosha Nawalny being a big shot, no – it’s about a generational change taking place. There is the Soviet generation, there is the post-Soviet generation and there is a new generation that knows nothing at all about the Soviet Union and wants nothing at all to do with it. They want to live a different life and have nothing whatsoever to do with the Soviet legacy. Those who still come from the Soviet Union are resisting it with all their might.

You went not only to the Belarusian embassy in Moscow, but also to Minsk to see what was happening with your own eyes. Can you tell us about this trip?

I really wanted to go to Minsk. When I sat down in the minibus, I saw that I was the only passenger. The driver said that no one would come because the borders were closed because of the pandemic. No one would be allowed in and because he was unsure whether my work invitation was really enough, I should rather sit in a large travel bag at the border. I was travelling day and night to arrive in Minsk. “You can’t draw if there’s always the feeling that you’re about to get hit.” There, the artist Nadja Sayapin was arrested, another activist was convicted and I was present at the court hearing. The next day I left for the rally, where I saw women being beaten up for the first time. It was brutal. It looked exactly like what happened later here in Moscow on 31 January 2021. People were just thrown on the ground. I spent part of my time looking at the city. I wanted to see how the city had changed and what signs of the partisans still remained (meaning signs of the opposition, the numerous graffiti and white-red-white flags and ribbons). I wanted to see how ordinary life had become extraordinary and waited for this big demonstration that always took place on Sundays. Actually, everything happens spontaneously. Where people meet, where they set off to – everything happens spontaneously. The activist who hosted me had to go somewhere else that day. Her sister, who had nothing to do with the protests and rallies, still wanted to accompany me. We were scared. Nothing was clear. If I am arrested, will I be sent back, banned from entering the country, or will I face legal proceedings?

I saw on Instagram that you were also at the “Square of Change” (a square called by the protesters, a courtyard between apartment buildings, where graffiti was sprayed on a transformer house, which has become a symbol of the protest).

Yes, I have been there. I was also at a court hearing against the organisers of the strikes. I made a lot of drawings and a local newspaper published news and put my drawings on them. In September 2020 we had a very different world. Big demonstrations. Now we don’t know at all what time will dawn. But I believe that certain changes will take place – not only from below, not only that people will take to the streets. There will also be changes from above.