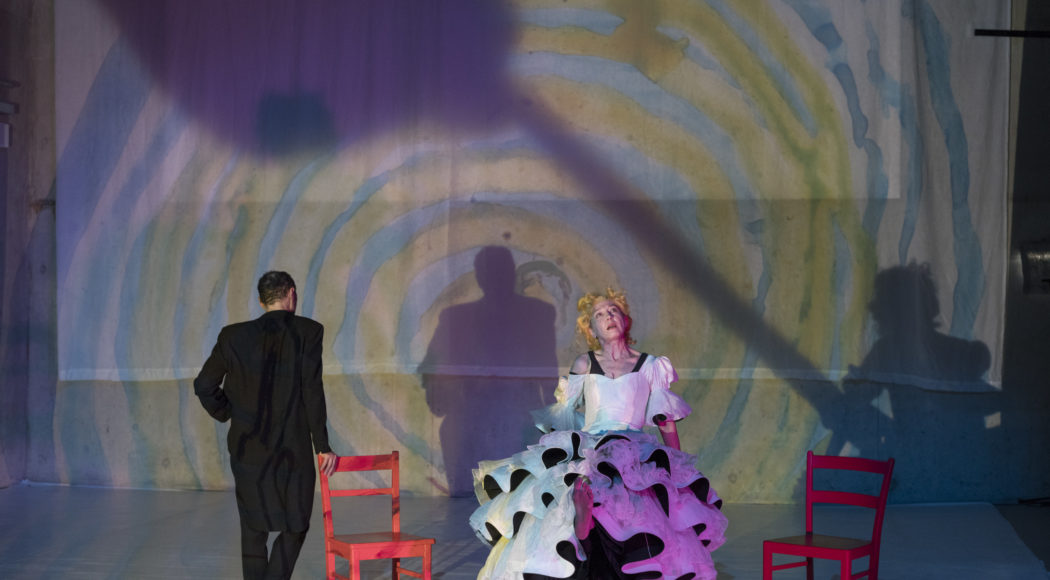 The title says it all: In “Über die Mauer” (“Over the Wall”), Kandinsky, known to most only as a painter, surprises us with a piece for the stage that tells of the creative process of a work. In a fictional dialogue between artist and spectator that is as serious as it is amusing, he provides an insight into the painter’s point of view, breaking out of the two-dimensionality of the painting and expanding it into the three-dimensional spatiality of the theatre. Kandinsky makes word and sound, movement and dance, light and colours – in other words, hearing and speaking, seeing and feeling as well as the transcending element – equally experienceable as a theatrical art action. A multi-layered, theatrical event emerges. Choreographer Arila Siegert realises this text together with the artistic team with whom she staged the internationally acclaimed performance of Kandinsky’s sound opera “Violett” at the Anhaltisches Theater Dessau in 2019. The singer and dancer Isabel Wamig, the actors Kerstin Schweers and Jörg Thieme will perform. The music is composed by Ali N. Askin, the set and costumes are designed by Marie-Luise Strandt, and Susanne Auffermann is responsible for the lighting design. The artist Helge Leiberg counterpoints and expands the scene with live painting.

The urge to choreograph has always been there and was encouraged by improvisation in the NKT. This self-discovery is the starting point. People wanted to express themselves through movement. And through the growing skills, also from classical technique, one could move more and more freely and extremely. Choreographing is a bundling of movement impulses from thoughts and emotions that one cannot express otherwise. For me, this is also a basis for staging. Together with the actor/singer, I try to filter out the underlying emotional situation of the characters, which cannot be put into words, through movement choreography and make it visible. / The impulse for me comes from within, and the aim is to bring this inner life outwards, into a dialogue, to make the invisible visible. This materialisation, this shaping is a very exciting process. First there is nothing – and then something has emerged and become visible. The most important thing is invisible anyway. / The first inspiration for me comes from music. I simply enjoy dealing with how, for example, an argument, a confrontation can be expressed choreographically under the most diverse aspects so that it appears funny, tragic, sad or absurd. In film and television, I am particularly interested in editing and camera technique, insofar as they reveal a thought pattern and rhythmise the processes. I like to read a lot. I also need reading to find silence and to think. Without music / At that time I already wanted to found a dance theatre where the individual gets more of a life of its own. Breaking the individual out of the masses was always my theme. In the GDR, one ran the risk of becoming a real number. The individual was seen as something uncontrollable. But even today it is “expensive” to be individual.