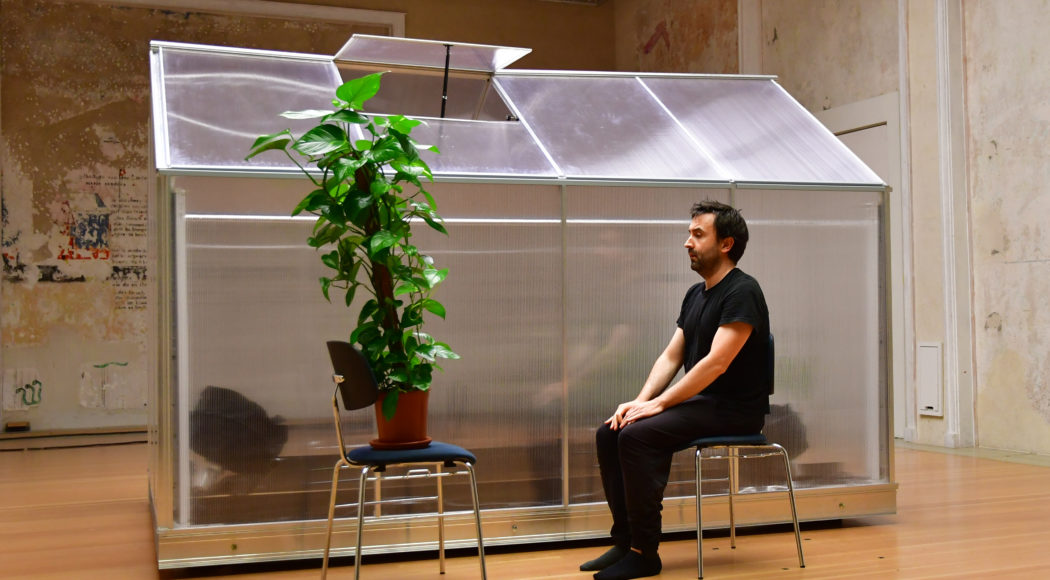 Romuald Krężel and René Alejandro Huari Mateus report on their Artist-in-Garden Residency at HELLERAU. To See Climate (Change) is an artistic research project that we initiated in early 2020 at Akademie Schloss Solitude in Stuttgart, developed in June 2020 at LAB Frankfurt and from August to September 2020 at the Artist-in-Garden Residency at HELLERAU. Starting from questions about ecological sustainability and environmental degradation, we have searched for different performative and choreographic strategies that allow us to make the invisible – the climate – and its changes speculatively visible. We have tried to build a landscape of images, affects and choreographic sequences, all based on the possible exchange between humans and “non-humans”.

A greenhouse (6.5 m2). Assembly of polycarbonate panels with aluminum poles. Placed on an aluminum frame with 4 wheels so that it can move freely in the performance space.

26 potted plants, bought in plant stores in Stuttgart and Dresden. During our stay, the plants lived in a room with sufficient access to sunlight. For the time of the samples, they were placed in the greenhouse in the Nancy-Spero room. Although the distant ancestors of the potted plants originally came from places near the equatorial line, the plants from our project were mostly born in huge greenhouses for reproduction purposes in the Netherlands and Germany.

“Hyperobjects: Philosophy and Ecology after the End of the World” by Timothy Morton; “Staying with the Trouble: Making Kin in the Chthulucene” by Donna J. Haraway; “The End of Ice: Bearing Witness and Finding Meaning in the Path of Climate Disruption” by Dahr Jamail; “The Ends of the World” by Déborah Danowski and Eduardo Viveiros de Castro. Stuff

Mealybugs. First discovered by accident on the leaves of the Marble Queen. They infest 12 other plants. The fight against them lasted about 3 months, including the month in Dresden. The fight consisted of washing the leaves regularly, spraying with organic products and finally using strong chemicals. The bugs disappeared at the end of our stay. Fungus gnats. These small black flies were inadvertently transported to HELLERAU. Their eggs lived in the moist soil of the plants. As the fly population increased exponentially, some plants had to be isolated. We controlled them by using butterfly-shaped yellow stickers, on which the flies caught until they died, as well as by clapping hands when the flies flew between the plants, and by adding some sand found in the cultural garden to the pots.