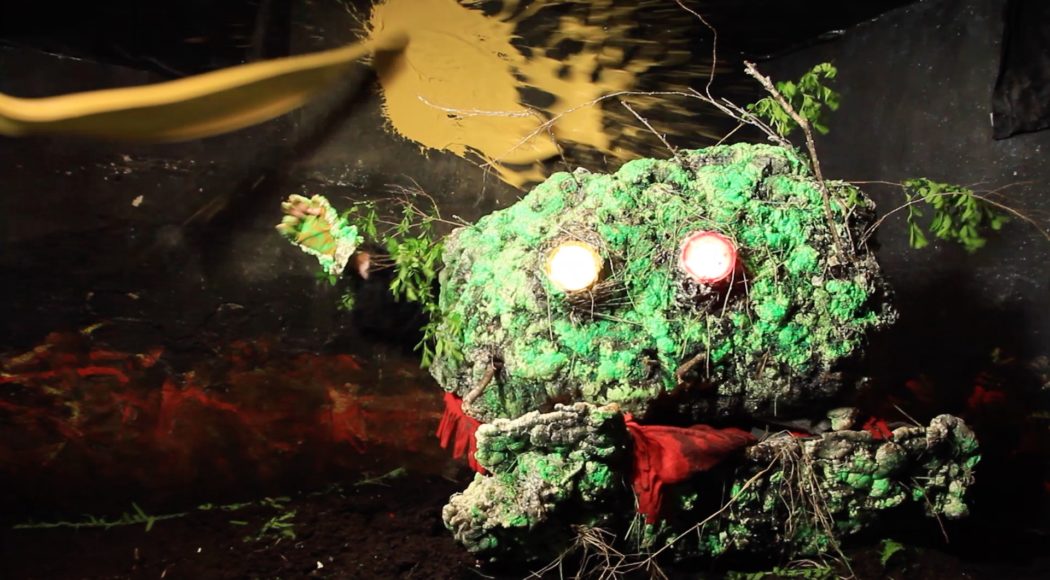 The Followers of Ø - Trond Reinholdtsen in conversation with Harry Lehmann and Christine Wahl, #2 - 2021

Mr Reinholdtsen, you are working on the music of the future! With your Norwegian Opra, you develop large-scale philosophical opera projects in which the music is played entirely with virtual instruments. Now you are coming to the Dresden Contemporary Music Days at HELLERAU. What will you be showing there?

It’s about a strange, mystical group of losers: inside and outcasts from the lumpenproletariat, the precariat. They call themselves “The Followers of Ø” and will perform their affirmative agitprop oratorio “To arms! To arms!”. For the (few) of you who don’t know the background: “The Followers of Ø” are hyper-enthusiastic and sometimes somewhat radicalised viewers who very often watch my YouTube film series “Ø” and try to interpret it.

One part of this “Ø” series could be experienced at the Munich Biennale in 2018: Troll-like creatures with construction foam heads sang key sentences of philosophy with great fervour.

The protagonists of the “Ø” films have voluntarily and completely isolated themselves from bureaucracy, decadence, digital noise and the whole idea of an “outside” in general. They call it “the system” and have barricaded themselves from it in the basement of a remote Swedish village. There they plan “The Event”, a mystical action of world-changing proportions. Unfortunately, their preparatory research,their philosophical and political deliberations, their methodological experiments in art and alchemy have come to a centripetal, semi-incestuous dead end; their “project” has become somewhat lost in theory.

You call your Norwegian Opra “the birth of opera from the crisis of contemporary music”. What does this crisis consist of?

To be honest, it’s a very boring crisis. Who cares about it? Maybe a few Germans. And me, of course. It is a real and catastrophic crisis, but also a tedious and redundant one. The bottom line is that contemporary music is in a sad, dark state, and I’m not really in a position to analyse how it got that way. Isn’t it that the whole scene is lacking in inventiveness, and has been since the seventies? When visual art entered the phase of dematerialisation and lost its media specificity, music followed very slowly. There have been individual exciting outbursts, but our beloved genre always seems to fall back into a counter-revolutionary position.

Can you please describe this music-specific conservatism in a little more detail?

For me, the contemporary music world is very academic, in the worst sense of the word. There are certain codes and unspoken rules (what is sometimes mistakenly called “craft”). You have to follow those to show that you belong to that system. But academism is always a sign of fear – fear of the anarchy of invention, novelty and dilettantism. That’s why we guard contemporary music with super-strong institutions: with academies, festivals, ensembles, orchestras, the concerto and commissioned works. But institutions driven by the logic of fear always end up choosing the most pragmatic projects and supporting the works of least resistance.

Indeed: a catastrophic crisis. How is Norwegian Opra going to get out of it?

The attempt is to question precisely these institutional coordinates, that is, the infrastructure of production. And with that, logically, I had to start all by myself: No money, no audience, everything was produced in my living room. On an existential and personal level, the crisis was thus solved; everything else remains to be seen.

According to the “Theory and Propaganda Department”, Norwegian Opra has a lot planned: It wants to be a kind of parallel action to Richard Wagner’s famous Festspielhaus in Bayreuth. What fascinates you today about Wagner’s idea of the Gesamtkunstwerk?

The reference to Wagner is, at its most basic and banal level, a nostalgia trip: a longing for a time when music was at the centre of the arts, politics and philosophy and helped construct and reinterpret the defining myths of humanity and progress. This is the music before the crisis – at least that’s my fantasy. The idea of the Gesamtkunstwerk was formulated – as readers know, of course – at the height of Wagner’s revolutionary activity, more or less during the flight from Dresden, where he, Bakunin and the rest of the gang had erected barricades and published dangerous pamphlets. In his text “Art and Revolution”, which he wrote a year after Marx’s “Communist Manifesto” appeared, Wagner introduces the concept of the Gesamtkunstwerk, signalling that there is a strong connection between the idea of the Gesamtkunstwerk and the political awakening. But he also dreamt of a link back to the Greek drama of Aeschylus, where art was closely connected to public life, religion and the state. As you can see, there is much here that is exceedingly fascinating: I intend to do all that, of course.

Would there actually have been a professional alternative for you?

No, I was always a monomaniac. Abridged version; the full interview appeared in Theater der Zeit, March 2021.