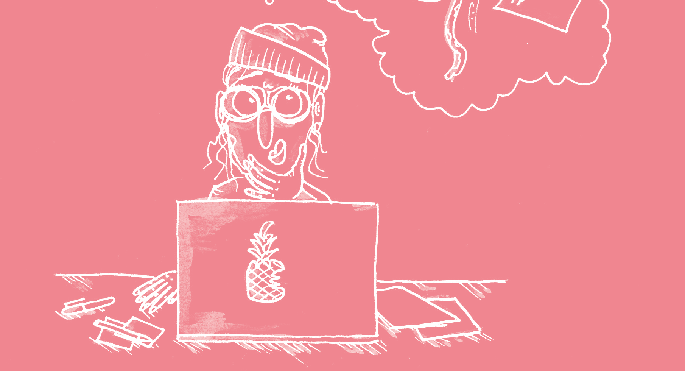 Artists research, test, reject, create, present. In collaboration with the Fond Darstellende Künste, HELLERAU provides space and time for 80 research residencies. Some artists have already begun their work in the fall of 2020, others will start their projects in the first half of the year. Many of the artists will sooner or later be seen at HELLERAU. The Dresden artist Max Rademann, known to HELLERAU visitors through the Tuesday Salon, will devote his research to the participatory moments of listening to music together. The illustrations of the #TakeCareResidences presented here are from Rademann’s hand.

Multidisciplinary artist Nora Al-Badri researches artificial intelligence and museums, Big Data, and the performative moment of the black box, negotiating them within the framework of a speculative and decolonial archaeology.

With “Stuff The World” the theater makers Hecke/Rauter examine the effects of anthropogenic climate change on the German-wide unique training program for taxidermy at the Bochum Vocational College. Which transformations is the job description subject to due to ecological changes? Are the aspirat:ers becoming witnesses to species decline or are they themselves witnessing a profession that is becoming extinct.

Robert Lippok explores the links between performing and visual arts. He will collect material and freely experiment with it in the stage and outdoor areas using stage and lighting technology in HELLERAU.

Sarah Ulrich: Writing About. Discourses of writing about performative arts

Sarah Ulrich questions the possibilities of exchange between performance on stages and the reporting on these forms of performance. What discourses, tensions, and visions are negotiated on stages? How can performative, visual, complex arts be mediated through the media? How can they be written about? How can non-discriminatory reporting be established?

Tanja comes from Saxony, Johanna belongs to the Ruhr area. In an open-ended research they want to investigate the obvious and puzzling similarities between East and West, read Werner Bräunig’s “Rummelplatz” and have biographical conversations with people here and there. What, for example, do mine closures in the Pott region and the end of Wismut have in common? And who transcribes all this?

The pandemic is not over. Thinking in terms of states makes no sense. Neither does inventing a new strategy. We need several. A strategy machine for plans from A-Z. Thinking supplies! What can theater contribute? A research at the world transition of offline/online, science, art and urban society.

Banda Internationale: GAGA and the effects on music and society

The artists of Banda Internationale ask themselves: Does music determine movement or does it work the other way around? What is the interaction between dancers and musicians?

Jule Flierl wants to find out about the transformative presence of women speakers in public discourse, using the examples of Rosa Luxemburg, Angela Davis, and Regine Hildebrandt. How did the way these prominent female politicians used their voices influence the perception of the content of their speeches?