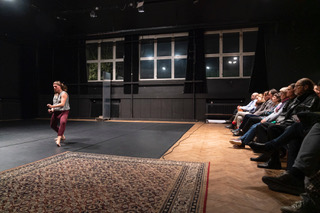 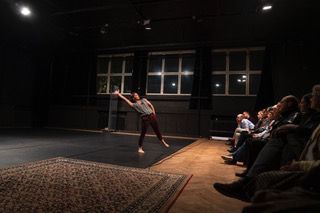 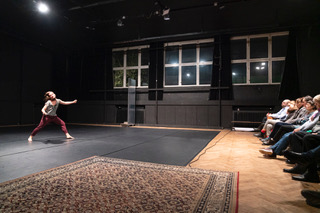 The starting point for the work is observations of how more and more people obviously want to be guided with a firm hand. But what happens on a physical level when power is exercised over you? When I am constantly ready to submit? How do obedience, rage, retention of power, control, aimlessness and powerlessness manifest themselves not only in the mind but especially in the body?

The solo power to whom is a summary of 6 months of research on the subject of power, made possible by a grant from the Cultural Foundation of the Free State of Saxony.

the guts company is a Dresden dance company, founded in 2013 by Johanna Roggan and Josefine Wosahlo. In their work, the company searches for approaches to staging that not only negotiate themes through aesthetic means, but also, and above all, capture them through a very physical language of movement. In addition to constantly dealing with social issues, abysses and motivations, utopias and visions of possible coexistence or a simple urge to survive, the company wants to address the physical and emotional centre of the audience*.

In Dresden, the guts company cooperates mainly with the Societaetstheater and HELLERAU – European Centre for the Arts.

Within the framework of a grant from the Doppelpass fund of the German Federal Cultural Foundation, the guts company cooperated with the Societaetstheater Dresden for the 2015/16 and 2016/17 seasons.

For their first Doppelpass work – Das Eigene/ HEIMAT – the guts company received the Ursula Cain Award 2017 as part of the Saxon Dance Prize.

Since 2018 the guts company has received institutional support from the state capital Dresden.

With their involvement in the local dance scene, the TanzNetzDresden, they are significantly involved in the developments and cultural-political discourses of Dresden’s independent dance scene. Through their own contribution to the local art scene, the guts company wants to strengthen and advance the region and its structure. Bringing together Dresden artists with artists from other cities and countries is therefore both a request and a challenge for the guts company. In this respect, the guts company would like to make a special contribution to establishing an open, communicative form of work in Dresden that works in flat hierarchies.

In cooperation with the Societaetstheater Dresden