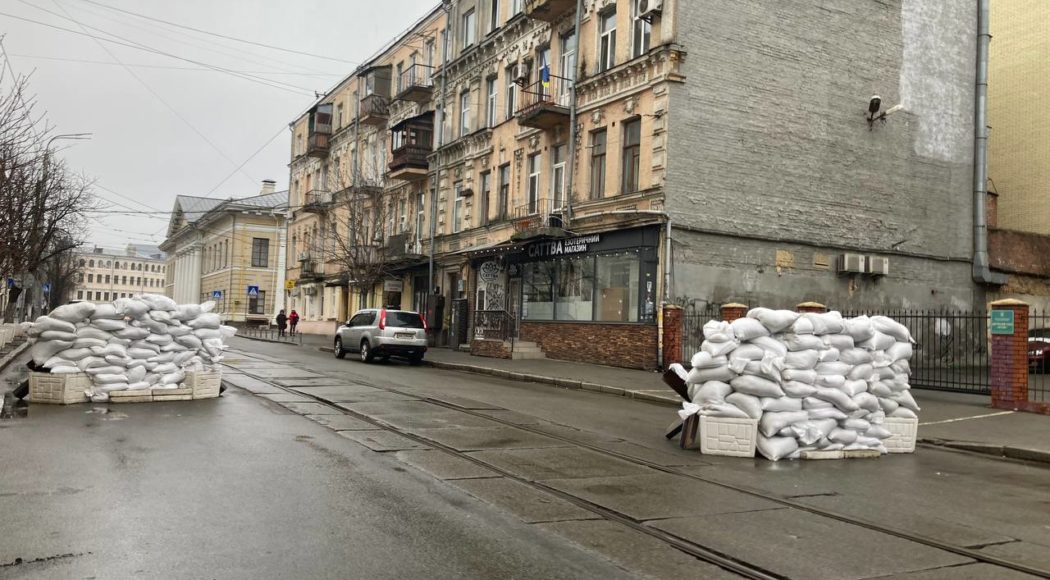 Since the beginning of the Ukraine war on 24 February 2022, the conditions for artists and cultural workers in/from Ukraine have changed drastically. Many of them have to spend their days in basements, air-raid shelters or in metro stations, which have become their only refuge at the moment. Some of them are fleeing to other countries and those who have stayed are engaged in volunteering, activism or in territorial defence forces to protect their families and their homes.

With ::: VOICES ::: UKRAINE, the alliance of international production houses is creating a growing archive of the voices of artists and cultural workers from Ukraine who reflect on the current situation in their home country, their everyday lives, their feelings and dreams, fears and hopes. We have selected two voices for the HELLERAU magazine.

When I think about the beginning of the war, which started in Donbas 8 years ago, the first thing that comes to my mind is gardening and vegetables. I was 15 years old and all the days my family and me spent tying tomatoes, watering cucumbers and uprooting weeds, while our nights were spent in the cellar between shelves with potatoes and pickles. I can’t remember when else we worked so hard in the garden like during that intensive bombing of Luhansk. If during previous wars happened on our lands, gardening was a question of survival, but now, when there never was a lack of food, why did we risk our lives so much?

The cellar, which served us as a bomb shelter, was also a place to relax after hard physical work and most of the time we read aloud to each other misadventures of Count of Montecristo. Granddad repeated all the time that true adventures are always VERY uncomfortable. So our true adventure ended when bomb hit the house in the nearest neighborhood and my mom packed some stuff, took me and my 6 year old sister and we left to the western part of Ukraine, almost by the last train from Luhansk before railway connection was totally closed. In my painting series about all these events, which I started three months before Russia’s  fullscale  invasion,  I  thought  about  weak  gestures  of  resistance  from  people  left  in  Donbass,  such  as  diligent  work  on  private  pieces  of  land  in  the  occupied territories, which are meant to be the last areas where the local population still has some “control”. How “effective” in general can be something not effective at all? These days, when I dream about Donbas returning to Ukrainian territories, I think about all those uncontrolled processes of growth, wilting, decomposition, healing or horrible metamorphoses that happened there for the past 8 years.

I don’t really know how visible and invisible consequences of war are being changed and are changing everything around. The constant feeling that something is happening there all the time, slow, secret and completely invisible to our eye, exactly like roots in the garden.

At night, I am on the third train commuting from Kyiv to the western Ukraine.  My girlfriend  and  I  bought  the  tickets  at  around 6 am right after we heard explosions from the shel-ling in the distance and read all the news about the Russian invasion on social media. I immediately shared the news on my Facebook and Instagram. I called my mother and sister, and warned my friends and colleagues about the situation. We packed hastily (things were prepared in advance –   an “anxiety suitcase”), poured water in the bathtub, had a quick breakfast, washed the dishes, while monitoring the news online.The train was at 3 pm, so we went out to check the shelter in the building. We cashed some money and observed long queues at the ATMs and grocery stores. People were tense and anxious, but no panic present. The cars were driving reasonably faster than usual. We took our stuff at 1 pm and went to take the tube for the railway station. There were a few people in the street, some of them glanced at us with suspicion and strangeness. The railway station looked quite usual as to the number of people and their condition, and the first train we took had lots of empty seats.When I wake up at night, I recall this feeling I had in 2014 in Sloviansk,  Donbas,  eastern  Ukraine.  At that moment, I was taken as a hostage by Russian-led separatists. I was beaten up, threatened to be executed and put  into  the  basement  where  I  spent  two  weeks,  and  then  moved  to  the  occupied  police  detention  center,  where  I  was  until  the  liberation  of  the town by the Ukrainian army, two and a half months later. First week in the basement, I  used  to  sleep  while  sitting  on  the bench, then they allowed me to lay down on the clothes on  the  floor,  and  there  was  a  better  sleep.  But every time I would’ve woken up I had that feeling that it was not over. The nightmare in my dream continued in reality. And that was the feeling I had when I woke up after a brief sleep on the train in the middle of the night.

All contributions can be found here: www.produktionshaeuser.de/voices-ukraine

VOICES UKRAINE is a project of the Alliance of International Production Houses, funded by the Claussen-Simon Foundation and the Stiftung Kulturglück. HELLERAU – European Centre for the Arts (Dresden) is a member of the Alliance of International Production Houses alongside FFT Forum Freies Theater Düsseldorf, HAU Hebbel am Ufer Berlin, Kampnagel Hamburg, Künstlerhaus Mousonturm Frankfurt am Main, PACT Zollverein Essen and tanzhaus nrw Düsseldorf, funded by the Federal Government Commissioner for Culture and the Media.