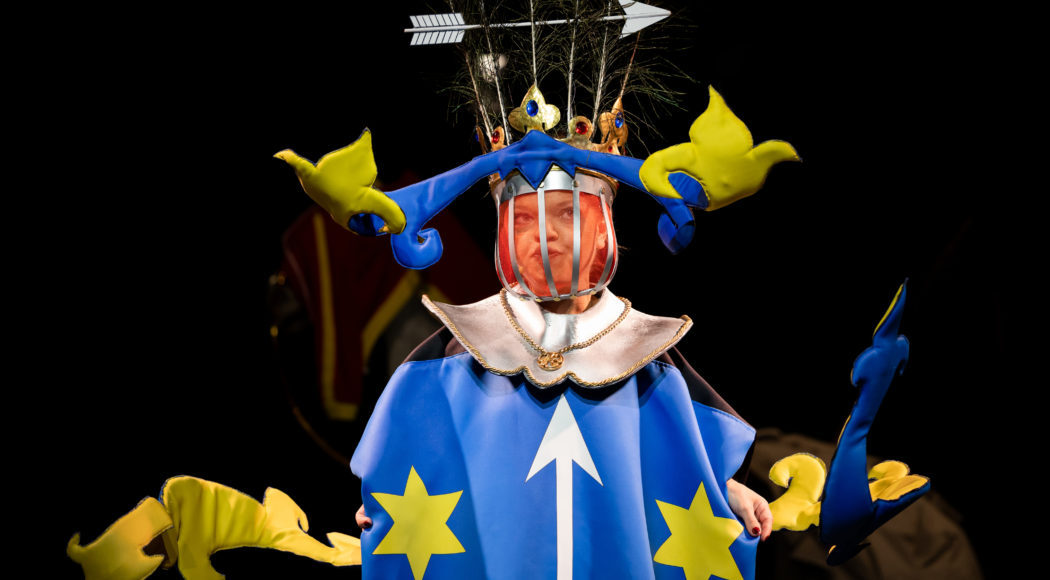 “Northeast Southwest” is a trans-national project of contemporary art with exhibitions, performances and art projects that will be on view from 23 September to 6 November 2022 as a cooperation between the Kunsthaus Dresden and HELLERAU in the robotron canteen, in and around the Festspielhaus Hellerau and in the city space.

“Northeast Southwest” is dedicated to the oldest and at the same time still current orientation process of mankind, which decides on existences and life perspectives, in which one does not exist without the other: While the “old East” and the “new West” transfigure themselves mythically or diabolically, depending on the perspective and distance from events, the concepts of the “global South” and the “global North” address lines of relationship and conflict in which a global colonial legacy lives on. “Northeast Southwest” takes up current conflicts with this global, political and cultural system of coordinates and asks how actors and groups can act within and beyond established coordinates and national structures?

From 23 September to 6 November 2022, “Nordost Südwest” will address this question with contemporary artistic positions from the visual and performing arts. The project is a curatorial collaboration between Kunsthaus Dresden – Municipal Gallery for Contemporary Art, HELLERAU – European Centre for the Arts, the Beirut Art Center, the KRAK Center for Contemporary Culture in Bihać, the Performing Arts Institute in Warsaw and other partners in Beirut and the independent scene in Dresden.  What Beirut, Bihać, Warsaw and Dresden have in common is the confrontation with the past and present of war and violence, with social and political tensions and migration as a formative experience.

In HELLERAU, in the robotron canteen and in the public urban space, works by international artists selected by the curatorial partners from Beirut, Bihać and Warsaw can be seen.  In addition, four other exhibition venues of the independent art scene in Dresden will show selected works from the Hoffmann Collection donation. In this way, the curatorial approaches and artistic approaches create a visible network of exchange and joint action between the different places, institutions and arts.

Within the framework of “Nordost Südwest”, HELLERAU will devote itself to the performative aspects of this exhibition project from 30 September to 1 October 2022. The motif of listening and the power relations between centre and periphery form the starting point of four artistic positions proposed by the Polish curator duo Marta Keil and Grzegorz Reske.

What is the shape of the sound that comes to our attention from the periphery? The centre is usually well audible because it places itself at the centre of the listener’s attention, whether they like it or not. It speaks loudly, often flattening the sound with its own dominant tone. The landscape of what we hear results from the way we distribute our attention. And this is a political choice. The conditions for this decision are shaped by the context in which we learn to listen. The melody of the neighbour:in’s voice, the sound of the streets, the flow of the rivers, the way a:e friend:in closes the door, the time of year when the birds and their morning conversations return, the order in which voices are raised at the family dinner.

Listening can be a demanding task.  It requires a genuine curiosity for what we don’t yet know and what we may not be confident with. Tuning into the rhythm of the person we are listening to means giving them as much space as they need – and sometimes giving up our own. So it is an exercise in redistributing our own resources: attention, time, patience, curiosity. What does it take to practise listening? How much time does it take to adjust to new sounds and voices? And how to deal with the discomfort they might bring?

For us as curators, the project “Northeast Southwest” is a multi-layered conversation with voices from regions that lie on the periphery or semi-periphery of the western, centralist perspective.  The performative programme developed for HELLERAU brings together artists from Poland and Argentina who are based in different European countries (Germany, the Netherlands, Poland).  What they have in common is that they problematise the power relations between the centres and the peripheries – and this not inevitably only in geopolitical terms, but also on the level of social and non-human relations.  Thus Wojtek Ziemilski addresses the discourse of theatre, its structure and instruments, and asks who actually owns them.  Zorka Wollny creates a powerful soundscape of feminist voices that conquer public space, Iwona Nowacka and Janek Turkowski listen attentively to the neighbourhood of HELLERAU and thus create the conditions for fascinating conversations that would otherwise hardly come about, and Nahuel Cano invites us on a journey where we learn to listen to the narratives of non-human beings.

Based on a personal family history, Polish director and visual artist Wojtek Ziemilski addresses the theme of legacy and inheritance in his latest stage play.  With Anna Dzieduszycka, a distant cousin, renowned actress and protagonist of the play, Ziemilski seeks to talk about the common past and the fact of inheritance, of material objects, physical features and cultural values.  “Ode to Joy”, which premiered in April 2022 at STUDIO teatrgaleria in Warsaw, is a play about what connects us familiarly and humanly, what we inherit, what we free ourselves from and what always remains part of us. In this way Ziemilski also questions the discourse of theatre, its structures and the tools of theatre and who they actually belong to.

The Polish translator, author and curator Iwona Nowacka and the Polish director Janek Turkowski have been working together continuously since 2013, especially on long-term film projects.  They are mostly location-based and their development is based on encounters with residents, archival documents and ongoing cinematic explorations.  The stories to be told emerge from the found material, the various fragments of which are combined to create a video storytelling performance.  As a point of departure for their work in HELLERAU, the two artists will explore the agricultural aspects of the immediate surroundings of the Festspielhaus and investigate what post-Soviet traces can be found in the soil.

“Ways to Listen to a River: Movement 1”, Argentinean actor and performer Nahuel Cano explores the surroundings of HELLERAU. As part of his extensive research into mapping soundscapes, he follows the voices of the water.  The resulting sonic map, which can extend far beyond the immediate banks of the rivers, seeks to capture not only the historical, political and ecological, but also the inner, personal voices of the inhabitants – human and non-human life. These stories, together with the filmic contributions of the Argentinean director Juan Fernández Gebauer, finally condense into a spectral narrative, an experimental concert that invites us to listen to those ghostly voices of the water and at the same time to find ways of dealing with what these waters have to tell us about their past and present and the future.

The works of Polish artist Zorka Wollny straddle the line between theatre and visual art and are closely connected to the history and architecture of the respective locations.  Through the use of classical instruments, everyday objects and singing, the artist creates immersive soundscapes of harmonic sound and site-specific noises. With “Imperfect Choir”, Wollny will develop a choral work on Dresden together with protagonists at HELLERAU.

A project in curatorial collaboration of Kunsthaus Dresden with HELLERAU – European Centre for the Arts, Beirut Art Center, KRAK Center for Contemporary Culture in Bihać and Performing Arts Institute in Warsaw.