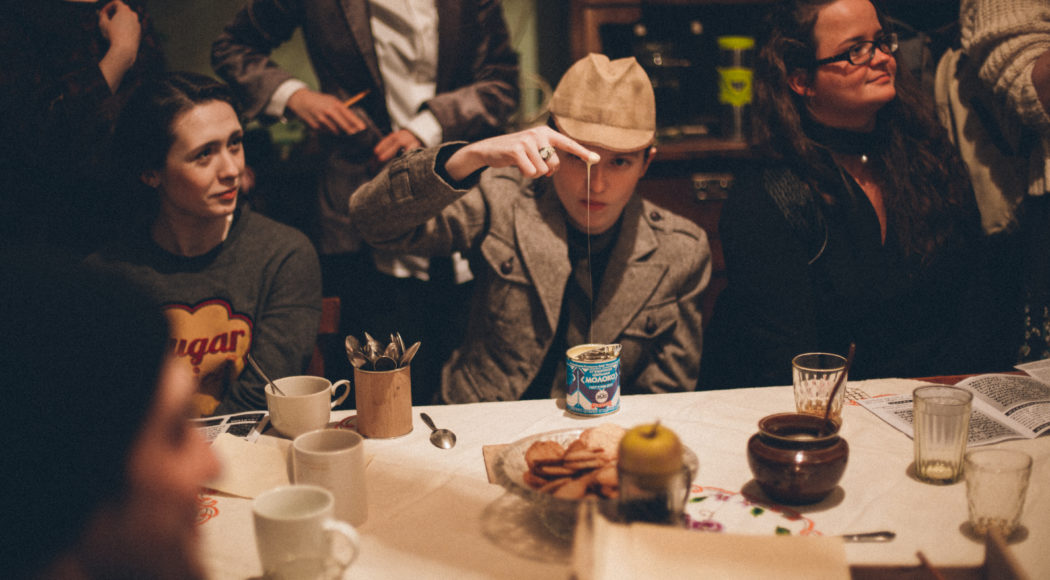 Journalist and producer Nika Parhomovska on a unique theatre experiment

In contemporary Russian theatre, social or inclusive projects are predominantly the result of initiatives by independent groups or directors who volunteer their time or are supported by the state or private foundations through grants. Although inclusion has been unofficially in vogue lately and people with disabilities or from socially vulnerable groups are more involved in the creative process than they were a few years ago, social theatre is still on the periphery of “official” theatre. The fact that the “Kvartira” project has been widely discussed during its years of existence between 2017 – 2019 gives hope that interest in this topic will grow. For “Kvartira” no longer exists. Several months have passed since the project was completed in a Petersburg flat and a small theatre legend has been created. Now it is possible to look back and realise the significance of this experiment. Boris Pavlovich and the management of the Alma Mater Foundation for the Promotion of Arts Innovations developed the idea of establishing a theatre space in an apartment building a few years ago. I joined them as a producer with extensive experience in social theatre. Other actors quickly joined the search and creative process of this special theatrical “place of power”: a group of young artists led by Katerina Andreeva, the actors of the inclusive play “The Bird Language”, which Pavlovich had staged during his work at the Bolshoi Drama Teatr St. Petersburg, a choreographer, a choir director and a musical director. Above all, however, everything revolved around people with autism spectrum disorders. Pavlovich regularly did workshops with them. After the idea arose to create their own flat theatre, these workshops became more intensive and focused. When a suitable flat was found in the centre of St. Petersburg, they began to renovate and furnish it. Many enthusiasts contributed their time, in-kind donations and other resources to make the creative union of theatre professionals and people with intellectual disabilities possible. While those responsible for the management were still sorting out technical issues, a team of actors was recruited. Young graduates of theatre colleges who were interested in social theatre could apply for the project in an open call. By October 2017, the team was complete and consisted of around forty people, including nine students from the Anton tut rjadom centre for the rehabilitation of adults with autism spectrum disorders. The first premiere in the newly opened “Kvartira” was the play “Non-Children’s Talks”, which was performed in November 2017 for a mixed group of children with and without disabilities and their parents. Soon after, the “Kvartira” repertoire also included “Talks”, which is emblematic of the project. This play was based on a book by Leonid Lipavsky, who had recorded conversations between his friends in the artist group OBERIU in the 1920s. There were two versions of the play “Conversations”: The first gave the audience unprecedented freedom and was not based on a clear score but on improvisations. The second version was characterised by the fact that it had a regulated structure and a schedule. This allowed the audience to calculate their own individual routes through different rooms – from the library to the children’s room to the living room and kitchen. The performance ran more than forty times and was nominated for the Russian National Theatre Award “Golden Mask” in the category “Experiment”. An important milestone in the history of the project were two other performances that were shown in the second year of its existence. One was the inclusive “Fairy Tale Factory”. It was initiated by the French anthropologist and actress Hélène Malayet, who taught professional actors and students from the “Anton tut rjadom” centre and helped them to “remember” the stories from their childhood and the fairy tales they heard, and even to develop their own fairy tales. The resulting play had similarities with the genre of stand-up storytelling and was linked by a common musical theme and thoughtful composition. The last premiere, played at “Kvartira” in 40 Moika Street, was the play “The Exploration of Horror”, also developed after Lipavsky’s “Conversations”. This time, however, it was performed without actors* with autism spectrum disorders. In the two seasons that “Kvartira” has existed, very different plays have been performed in terms of form and content. The space, which was meant to be connective and inclusive, actually brought people together who were interested in theatre as a laboratory and process. The idea of performance took a back seat, although the achievement of “Kvartira” is impressive and is not only expressed in numerous nominations and awards. It is expressed above all in the fact that despite the loss of the venue, the team and the productions still exist, are performed in different places and new projects are developed.