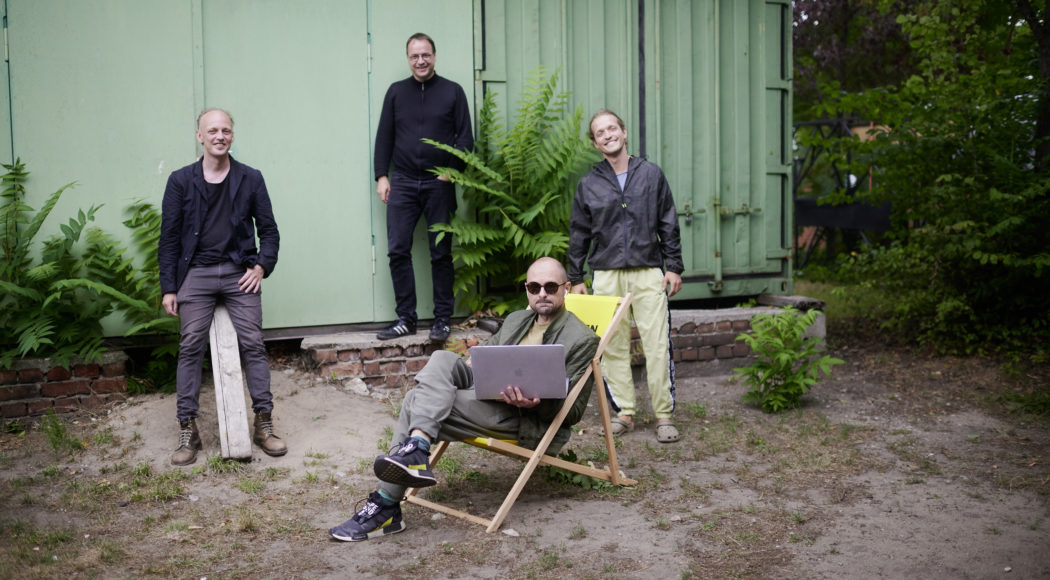 Making everything visible in every moment - Music Theater "Slaughterhouse 5" based on the novel by Kurt Vonnegut, #2 - 2020

We remember – permanently. Sometimes they are good memories, sometimes bad, some memories fade, others seem long forgotten and are suddenly back. We already carry within us all the personalities we once were and perhaps will be in old age. “All moments – past, present and future – were always there, will always be there,” says Kurt Vonnegut’s novel “Schlachthof 5”. In his text he has found a congenial translation for this phenomenon of remembering different phases of a life. It is not just any memories that Vonnegut processes, but memories of one of the most terrible chapters of the 20th century. Vonnegut experienced the bombing of Dresden as a young American soldier in German captivity. He recounts the horrors of the war and at the same time makes memory itself a subject. His novel is collage, satire, biography, science fiction, and everything at the same time. The novel’s narrative wanders through different time levels in fragments and excerpts, allowing personal experience and lessons learned to merge with fiction. The team around the Russian theater director Maxim Didenko has developed a new stage version of “Schlachthof 5”, which will premiere in September in HELLERAU. Johannes Kirsten, dramaturge and author of the libretto of the musical stage version spoke with the artistic team of the production. Maxim Didenko – Director When the HELLERAU team contacted me and offered me to develop a joint project, I started to become more involved with the history of Dresden and read books with a reference to the city. I had heard about Kurt Vonnegut’s “Schlachthof 5” before, but I didn’t know anymore that it was actually a book about the bombing of Dresden. While reading it, I realized that it is about much more – about violence, about processing a trauma, but above all about memory. I like the idea of the book that past, present and future take place in the same moment. This thought is very close to how I perceive reality. I find it a wonderful challenge to look for a way to tell or make the simultaneity of time tangible through the means of theater – that our birth, our childhood and our death take place in the same moment and that past and future do not really exist, but that we only have the here and now, in which everything is contained. 75 years after the end of the war, “Schlachthof 5” is the best material for a project in Dresden. The Second World War is a theme that connects all the nations of Europe – in my case Russia and Germany. I then had the idea of working with the American AJ Weissbard as a stage designer and thus connecting three nations of the Second World War in the project. The way we now realize the material has its starting point in my roots in HELLERAU. I was a performer here with the group DEREVO. That still shapes me today. My theater is a very physical theater. Because we developed “Schlachthof 5” as a free project from the beginning as we wanted it to be, we did not hire actors* inside, but singers* and dancers* for the realization. When I work in Russia, I usually have to work with theater actors who are not really good dancers. The idea of realizing “Schlachthof 5” as a mixture of music, dance and theater also arose from the context of the performance location, the Festspielhaus and its history. Here dance and contemporary music play a major role. This is perhaps not the easiest way to tell the story of the book, but this difficulty inspires me more than it deters me. Because of the Corona situation, we have completely changed the spatial concept once again in order to be able to deal with the rules of distance. So it became more and more complicated in the preparation process and I realized that this made me all the more excited.

“Schlachthof 5” is the novel by an American author about his experiences in World War II, about the bombing of Dresden, which he witnessed, and about the difficulty of remembering. We are now realizing the material as a Russian-American-German team. Ultimately, however, the nationalities then and now are not important. The real boundaries between the enemies in both world wars and numerous local wars that followed were not between peoples, but between criminal governments whose selfish interests demanded blood and people who let these criminals rule with the consequence of shedding blood for their interests. The former had learned well how to manipulate the latter, and how hate can be produced casually and indifferently like weapons. Vonnegut’s novel is important because it exposes the criminal nature of war as an activity of criminal governments – whether German, American or Russian. Unfortunately, this has not lost any of its topicality. How can such material be translated into music? In this opera, composed for a vocal ensemble, there are no heroic choirs and exciting arias. Rather, it is a concentrated, introverted narrative, a monologue that is counterpointed between the eight voices of the ensemble. The musical director of the production, Olaf Katzer, once compared the method of presenting a verbal text in this score with that of Heinrich Schütz. Stylistically, of course, it is about completely different things, but I unexpectedly noticed for myself that Olaf was right with regard to the structure of the text. Even though the novel jumps a lot through time and space, I try to keep the musical development continuous. There are no epoch portraits or places of action, because for Billy Pilgrim, the novel’s hero, war is not an adventure, but an experience of painful reflection and introspection.

When I read “Schlachthof 5” in my youth, I tried very hard to find the common thread in this novel. Now, while rereading in preparation for this project, the narration was no longer important to me at all. Instead, I followed the hints and associations of the novel and rediscovered the book once again completely. How one perceives a story is strongly influenced by the context of the reader*. A thought that is all the more important in theater. If we adapt this novel for the stage now, our interpretation must work for an audience of today. But just as the novel’s thread jumps unpredictably, our approach to the material has changed as our own context and perception of the world has been radically transformed in recent months. In our first approach to the project, we tried to combine the architectural character of the Festspielhaus with the fluid thought space of our narrator and his universe. It was an excursion through traditional presentations in the Festspielhaus, but it went beyond the scope of the project. A later approach led to a more classical and modest interpretation. Then came the Corona tragedy. The challenge of the COVID-19 pandemic has shaken life all over the world and in every industry. In art, we are preparing for new challenges in terms of working together and realizing projects, meeting the audience and many other challenges. This unique situation has prompted us to rethink the concept for “Schlachthof 5” in HELLERAU in order to ensure the safety of the audience and performers* while still allowing for artistic work. In our interpretation of “Schlachthof 5” everything will be visible at every moment; it will be a theater installation that gathers audience* and performers* in a common space. The audience* inside will create their own personal journey through the material by choosing their own focus and curating their own experiences. The impossibility of getting a complete picture corresponds to the questions that are currently predominant: What is certain, what has happened to us and what can the future bring?

I have been in Dresden since 2005 and live in the same street where my great-grandparents lived before the war until they moved to a suburb. In Dresden it is impossible not to notice the significance of February 13, 1945 for the city. Two different moments remained in my memory. Once a big neo-Nazi march a few years ago. The deserted city and the large police force were spooky. More positive is a memory of the commemorative event at the Heide Cemetery two or three years ago, which I was allowed to frame together with the Junge Ensemble. I read Vonnegut’s novel only now in preparation for the project. It was hard for me to imagine how such a heterogeneous narrative could turn into an evening of theater. The multi-dimensionality that is already emerging exerts a great fascination. The word-sound relationship is of course the most exciting thing for me, i.e. how the contents of the novel can also be made tangible or sensually perceptible through music. What has been composed so far and how Vladimir deals with the structure of time in order to make the novel’s idea of the simultaneity of past, present and future tangible, I like very much. Vladimir has given the parameter pitch its own substance. He has wrested pitch from its Western European function. We have a tone spectrum, and the respective pitch is partly left to chance. The rhythmic structure is immediately noticeable. The pitches have their basis in the narrative and are extremely suggestive. At best, a state is created in which we forget normality and experience what the novel tells us in words. The greatest challenge for us as AuditivVokal is to immerse ourselves in Vladimir’s cosmos and his desire to follow it, to surrender completely to natural singing despite the gripping rhythms.