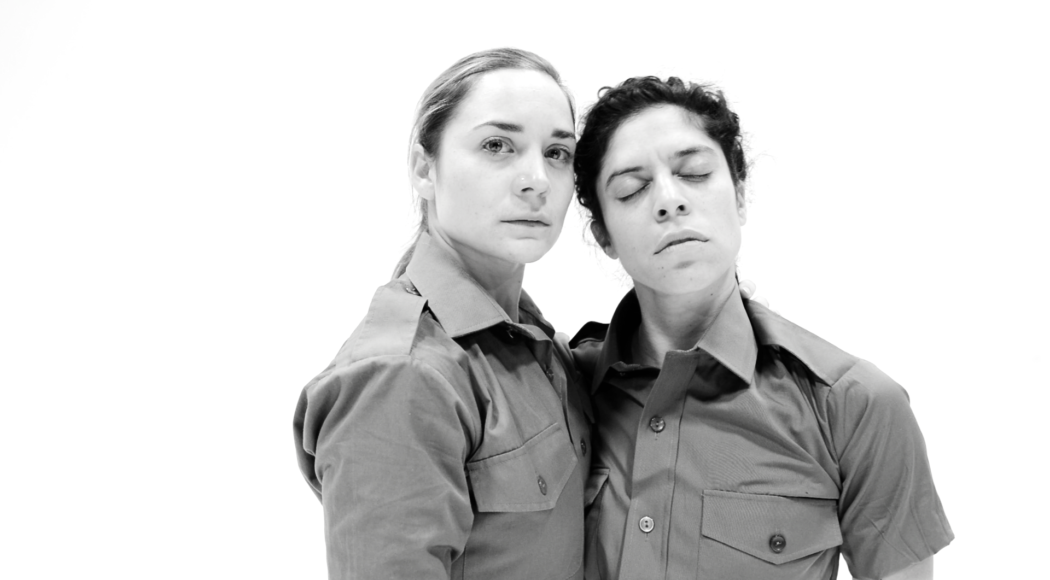 HELLERAU is dedicating a portrait to the Tel Aviv-born artist Reut Shemesh in October and presenting three selected stage works and two installations. The weekend takes place as part of the anniversary year “1700 Years of Jewish Life in Germany” in cooperation with the Jewish Music and Theatre Week Dresden. Wolfram Sander (HELLERAU) met Reut Shemesh for an interview.

You come from a dance background, have trained as a choreographer, work as a photographer, filmmaker, poet and author. Your interests are obviously very complex. I read that you describe yourself as an artist who creates transmedia work. Is that still accurate?

I certainly wouldn’t call myself just a choreographer. That’s a bit boring.

You grew up in Israel, were in the military there, then moved to the Netherlands to study. Later you came to Cologne to do a Master’s degree. Since then you have been living there. Can you describe what drives you?

I think it’s the combination of content and aesthetics. I see things that interest me, often pictures – and they are always related to a certain theme. I then very quickly think of further visualisations for this theme. This aesthetic of the actual image is a driving force for me.

Can you describe the process of finding a form for this interrelation of content and aesthetics? Do you start with the body or in theory? What does your research look like?

Each piece is a little different. With LEVIAH it started with the text and then it became first a film, later a stage work and finally a real film. Each play has different forces. The work with the Funkenmariechen (COBRA BLONDE) started as a mere photography project. It was not at all clear that it would ever become a stage play because the images felt so strong. But at some point I was just curious and wanted to know what would happen if I restaged the photos. Right now, for example, I’m interested in doing a play about ultra football fans at a Belgian theatre and I’m going to try to investigate the ultra fan club scene here in NRW and re-enact that with young people from Belgium. Of course, there is also a political content to it. I want to go to the clubs, observe these people and talk to them. I am sure that photography will also be an essential tool in this. Here again we have intersections of aesthetics and subject matter. In order to learn the aesthetics of the UItras, I have to record or film them. In this case, my work will again start from a kind of documentation.

And then this material seeks its own form?

ATARA initially started with confessions only from religious and secular women. There was a lot of text that was not clear in which direction it should develop at all. I documented something in a certain way and then I let it sink in. Later I come back to it and think about what direction, what format it could take. I think it’s a bit like a journey.

I’ve read that you explicitly go to spaces you’re not invited to. And then doors open. This is obvious in your work, for example with the Funkenmariechen or the Jewish-Orthodox Women’s Community (ATARA) – also now with the Ultra. So far, your work has mainly been about the role of women.

That won’t necessarily be the case with the Ultras, because of course the majority there are men. There are also women in these clubs and it would be great to include them, but it won’t focus on women. I’m also a bit annoyed by this women’s issue. At ATARA, for example, there is also a man. I feel it would be a shame if we approach feminism only on the basis of women. Let’s practise it with men as well. Keeping it just between us would be far too easy.

In LEVIAH I discovered a lot of violence, which is intensified by the repetitions.

Aggression plays a role in LEVIAH and I think it has to do with my Israeli upbringing. I find a lot of my Israeli colleagues work in a very edgy and aggressive way physically. I think we are very used to that in our aesthetics.

Maybe also because of the everyday tension that is quite obvious when you live in Israel. That produces something, too. Then there is the implementation of the military in society.

Yes, but I also think it’s something like a tension in the body. In Israel, everything is much more acute and much more in the now, more stressful, more energetic, more alive – an excited beauty. It’s reflected in people’s bodies and of course in the work they create. There is a power there. When I came to Europe, I remember it clearly, I was shocked by this different temporality that prevails here. Do they really take an hour and a half now to plan who holds the camera and when? I was alienated by the fact that they talk so intensively about details that I would never have the time to think about. Today I find that beautiful. But the energy level, rhythm and tempo are completely different in Israel. This can also be seen in our work: in the need to be in a certain physical state. Fun Fact: I was in Dresden as a teenager, by the way. In Israel, you can do your Abitur in dance. Our teacher then took us on an exchange to Dresden. We stayed with families and went to a dance school somewhere in the city centre. We also went to the Palucca School to take classes and even had a performance there. I still remember it very clearly. That was 20 years ago. The first encounter with Dresden, my first stay abroad.

In almost all your plays, there is an interesting group dynamic created by uniforms, masks, wigs, which helps to dissolve the individual in the group. There is then this moment in COBRA BLONDE when a performer takes off her wig and it becomes intimate in an almost painful way. Is it also about the struggle to find one’s place in the world, to assert one’s identity?

For me, it’s about social power as power and as movement. And how do people find their way in such structures or not? What exactly is the individual supposed to be? I am convinced that we are extremely pre-formed by the circumstances in which we grow up and are brought up. We always carry so much around with us. So it is already a question of entering into a kind of self-talk about the relationship between oneself, one’s own upbringing and the forces of society. In COBRA BLONDE I am also interested in showing how the dancers criticise the environment in which they work. You watch them and you are very confused. I like this blurring between the belief that the performers are transforming themselves into contemporary dancers on the one hand, but that they are actually part of this traditional folkloric dance culture. This irritation, this complexity is something that appeals to me more and more. I don’t see the dance girls as victims of anything. They are very strong on stage, master their craft perfectly. They are at the top of their game, sometimes more than some of my colleagues from the contemporary dance scene. The idea that the world can be divided into black and white and that people are good or bad is something I want to question more and more in my work. After ATARA, it remains unclear whether this group is oppressed by orthodox women or not, whether they think modernly or not. I will not answer these questions. I am more interested in how the people in the audience feel about their own family structure or their own situation as hipsters. Let people work through their own preconceptions about dance girls in COBRA BLONDE. When you look at yourself, you find so much controversy and so much friction, and that’s where the future of theatre lies. Looking at these controversial figures and understanding that they exist in each and every one of us is really interesting to me. After all, most of the cultural content we consume is based on a black and white schema. This construct is very unfeminist in my opinion, because it’s not about compassion or understanding the other side. The best example is the Israeli-Palestinian conflict. It’s so complex and so controversial that you can’t just say here are the assholes or there is the oppressed group. That no longer exists. We can’t get to the complexity of a conflict and its entanglements that way.

Keeping the complexity and not limiting it in black and white patterns – that throws me back to the question of how we as a society in Germany can think of difference as part of something appealing that we want to have. Let’s take the concept of “integration”, which I think is completely outdated. It means embracing difference until it disappears. Can we sustain complexity as the coexistence of many differences that are in a very dynamic flux with each other?

Perhaps we will never be able to live with these differences, and I think this is because we always look at ourselves in the mirror of the Other. Our perspective is always that of the other. It’s so hard for us to accept differences because it says something about us. When I see a very classical German family, I’m also a bit scared because it does something to me, to my otherness, my being different. But why does it actually have anything to do with me? It shouldn’t trigger any emotions in me. So that’s also the question: why these mirrors? I think it’s something that lies at the bottom of humanity. We can’t get rid of it.

07.10. – 10.10.
Portrait: the choreographer Reut Shemesh
ATARA, LEVIAH, COBRA BLONDE Let’s catch tigers, Wildwood Flowers
In the framework of the Jewish Music and Theatre Week Dresden. This measure is co-financed by tax funds on the basis of the budget passed by the Saxon State Parliament. Funded within the framework of the Alliance of International Production Houses by the Federal Government Commissioner for Culture and the Media.