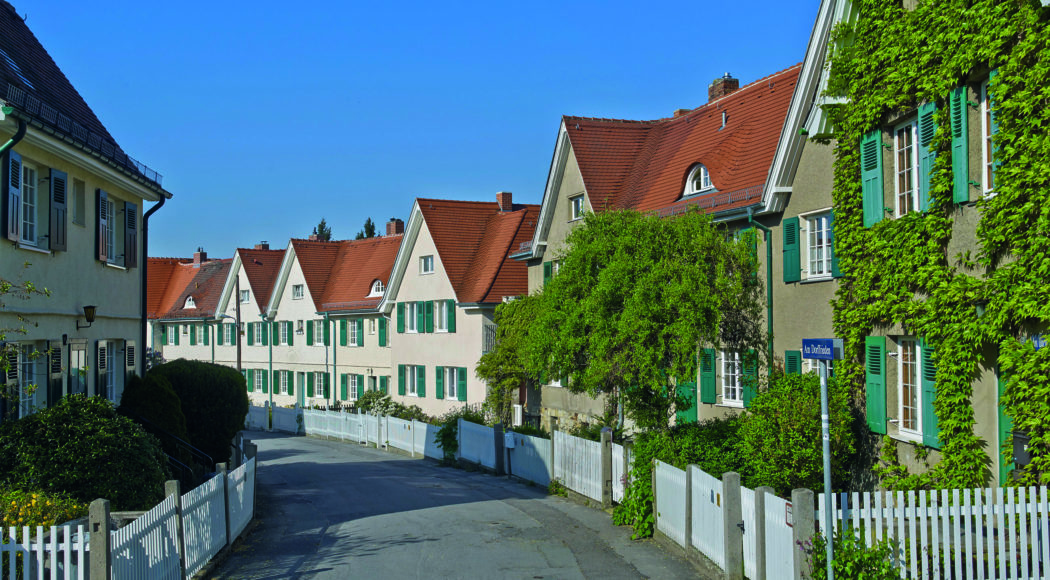 Whether “Eden” in Berlin-Oranienburg or “Monte Verità”, the mountain of truth, in the Swiss Ticino – the names of the reform settlements built around 1900 often speak of the longing of their builders.  It was about light, air, freedom, truth, happiness, friendship, it was about those core concepts that can still make utopias alluring today. The reform settlements of the early 20th century were usually synonymous with the striving for a better life.

It was no different in Hellerau near Dresden. The originally planned name “Neuklotzsche” gave way even before the official christening to the name Hellerau, which in its promise of light meadows was much more in keeping with the zeitgeisty, reform-oriented optimism for the future.  Whereas on Monte Verità in Switzerland it was the avant-garde-oriented dropouts who met in Hellerau, the reform project in Hellerau brought together bourgeois new thinkers such as the founder of the German Workshops Karl Schmidt and Wolf Dohrn, both co-founders of the German Werkbund. From 1908 to 1914, they realised a unique life reform project here, drawing on reform approaches from previous decades.  In Hellerau they combined the garden city idea with progressive entrepreneurship, social utopias, architectural modernism, reform pedagogy, art and cultural reform. The founders and idea generators of the place were concerned with a living environment in which technology and progress alone would not determine the pace of society.

The importance of Hellerau as the centre and condensation point of the Lebensreform movement is not only recognisable in retrospect, it can still be read in almost all the material evidence of the founding period. No other currently existing reform town of the early 20th century has a similar number of unchanged buildings and settlement structures. The so-called OUV (Outstanding Universal Value) ennobles a natural or cultural site and authorises its inclusion in the World and Natural Heritage List. Hellerau has this value due to its uniqueness and state of conservation.

Based on this, in 2011 Hellerau citizens and institutions set out to apply for the World Heritage title with the Lebensreformprojekt Hellerau. Such civic engagement is very rare in Germany – but no less effective for that. The parties involved brought the experts from the Institute for Heritage Management in Cottbus on board, commissioned studies and organised colloquia. Over time, the partnership with the city of Dresden and the Free State of Saxony grew ever closer. The municipality committed itself to the project through a unanimous city council resolution in April 2019, and the Free State of Saxony chose Hellerau as a candidate for the federal German application list (Tentative List).The Förderverein Weltkultur-erbe Hellerau, which has since been founded, devoted a lot of energy and financial resources to the project. The members of the association have prepared a scientifically based application document in which Hellerau’s structure and architecture are used to explain the content of the reforms.  The “great period” of Hellerau, the years 1908 to 1914, are at the centre of the explanations. The Festspielhaus, today’s European Centre for the Arts, the historic company ensemble of the Deutsche Werkstätten, the small house and villa areas, the public spaces, the street and road network including the squares and paths, and much more are all centrally located. Particularly significant is the very theoretical implementation of the garden city idea according to Ebenezer Howard, which was first realised in Letchworth/England from 1903.

At the end of 2021, the Free State of Saxony forwarded the Hellerau application to the Conference of Ministers of Culture. In April 2022, an expert advisory board visited Hellerau and examined the descriptions in the application document during a detailed tour of the site. The experts will finalise a corresponding report this year, which will then form the basis for the final decision at the federal level. If it is positive, Hellerau will be placed on the Tentative List. A year later, it could apply to UNESCO at the international level.  At the end of the process, it will be inscribed on the list of the world’s natural and cultural heritage sites.

So the goal of all the efforts is inscription on a list?  To put it briefly: yes.  That doesn’t sound spectacular. But the list we are talking about is something special. It stands for the worldwide, common effort to preserve the cultural memory of humanity for future generations.

Hellerau should be part of this list because it stands for humanity’s longing for a better, solidary, holistic life as we still find it today. Hellerau deserves the World Heritage title because it is a unique example of how collective action and courageous avant-garde make social change possible.

Exhibition at the Centre for Building Culture Dresden