Born in Eppendorf, Saxony, in 1929, Heiner Müller never tires of digging up the historical foundations (of reunified Germany) and uncovering uncomfortable continuities of social structures until his death in Berlin in 1995: Violence, social injustice, mechanisms of exclusion. “What is needed now is not unity, but the formulation of existing differences,” explained Heiner Müller shortly after the fall of communism. The “new walls” prophesied by Heiner Müller in 1994 have been installed, the eastward expanded European Union is shielded from the streams of refugees, the consequences of co-inflicted poverty and war. What should we do? – after the great stories and subjects of the revolutions are buried? Are there any new attempts to take up and reinterpret the old ideas? And what potential do Heiner Müller’s texts and political thinking have for contemporary protest movements?

Not played in the East until the mid-1970s, Heiner Müller’s plays met with great interest in Germany, France and the USA. What made the figure Müller suitable for the leftist discourses in the West? How did the Wende change its reception in East and West? And why did he become perhaps the most sought-after interlocutor for the media after 1990?

A panel event in cooperation with the International Heiner Müller Society is devoted to these and other questions.

Heiner Müller is reanimated in the interactive audio installation “Die Müllermatrix”. The audience communicates by telephone with a Müller cyborg. Half human, half telephone computer, Heiner Müller expresses himself on a wide variety of contemporary topics: from the decline of Europe to data retention, migration and social inequality to the contemporary theatre landscape. The participants can individually design their exchange with Heiner Müller by key selection, search for answers for the 21st century on the soundboard of Müller’s remarks, and penetrate together with Müller into the demonic depths of the hypertextual system into which he was transplanted for this audio installation.

With the analysis, original sound montage and digitalisation of the extensive Müller audio material, Interrobang have created an artificial Heiner Müller intelligence that looks back eerily and alienately on Heiner Müller’s texts and interviews and reconfigures them for the present.

A podium event in cooperation with the International Heiner Müller Society. 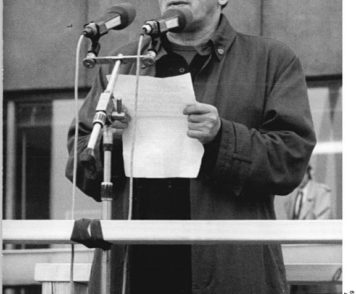 Three dialogues with a dead man