Inspired by the award-winning full-length Akram Khan solo “XENOS” (2018 HELLERAU guest), “Chotto Xenos” is a new, captivating dance production for children and families, created as a collaboration between the world-renowned dance company and director Sue Buckmaster. “Chotto Xenos” asks big questions of young audiences: How does war begin? And how does it end? The answers also depend on who is telling the story. The play explores the often forgotten and untold stories of the colonial soldiers of the First World War to shed light on our present and future.

“Chotto Xenos” is for everyone from 8 to 99 years.

Please note:
Fog effects and sometimes loud music are used in this piece.

+ Audience discussion afterwards on 19.11. after the 7 p.m. performance

The question was how and why? On first glance, XENOS appeared almost impossible to re-imagine for a child-friendly audience.

Children today are exposed to images of war through social media and the concept of conflict as fun through video games. They deserve to have some creative reflection time to ponder on what it means to them, the lives of those they are close to and the world they will grow up in. They are also subjected to a rather limited education about the history of war, often neglecting a very necessary re-telling of the soldiers experience, where they are from and what they believe they are fighting for. Our future peace processes rely on us inspiring a younger generation to be more tolerant and understand the triggers for conflict and ways to manage it. This begins in the playground but unfortunately doesn’t end there.

Once again we were able to draw from the rich reservoir of ideas discovered in XENOS and revisit, re-imagine and recycle them. Aspects of the original XENOS are interwoven with more child-friendly content to present a unique new production.

We did this by widening the reference to all colonial soldiers and incorporating some assemblage film footage of original soldiers which the children in our audience may never have seen. We also provided a gateway of understanding by making reference to the iconic soldiers uniform which they may be more familiar with. Akram’s early research into the story of Prometheus inspired a mythical beginning of how man plays with fire. Humour became important as we explored how children will often ‘play at war’. A dog gas mask which had been cut from the XENOS production reappeared as a puppet to explore the loneliness of war. Once these gateways of engagement had been explored and incorporated we were able to take our audience closer to the darker elements of the original XENOS and draw from the exquisite solo choreography Akram had created.

In 2020, just before the pandemic halted touring, we created Chotto Xenos. It was developed at Arts Admin and Sadlers Wells, London, The Point, Eastleigh, and finished rehearsals at Dance East, Ipswich where it opened.

Chotto Xenos will build on the previous tour of Chotto Desh and continue important audience development for Akram Khan Company. I hope it will inspire positive understanding of the danger of war whilst being a beautiful engagement with the best that dance and music has to offer. 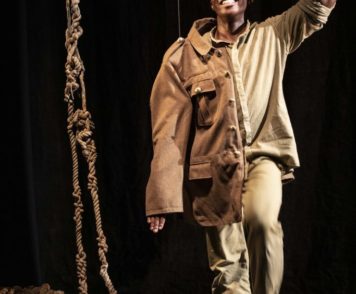