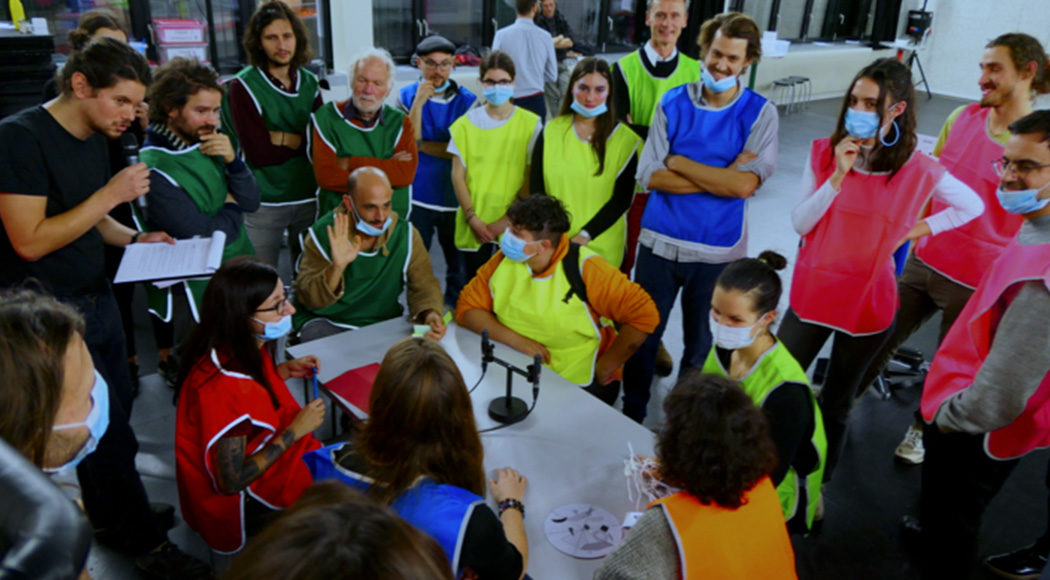 If you follow our activities, you know that since 2018, we’ve been working on a project calledVIRUS. In this game-based performance, 100 spectators are invited to make decisions regarding research, the economy, homeland security and similar issues in order to contain a contagion. The pandemic simulation was designed in collaboration with the game developers of Kaedama and with Dr. Philippe Cano, who has been coaching governments on how to manage health crises and pandemics for several years. When we launched the project two years ago, the WHO was warning about the statistical probability of a major pandemic striking the world before 2025. Today, we are overtaken by reality…

The project inevitably changes with the evolution of the actuality. Humbly, we hope to be able to take in account what we are all going and will go through in the times to come. Undoubtebly one of the most delicate task the Company has undertaken so far.

We would like to share with you the main lesson that we learned from the VIRUS project: when the world is hit by a pandemic, the only way to contain the spread of the disease and to protect the bases of our society is through collaboration. Collaboration between countries, governments, and their citizens. If our only concern is ourselves, things go badly. If we care about ourselves and others, we can make it.

Just like you, we are concerned about the consequences this crisis will have on all the people whose lives will be impacted, directly or not, by this virus. Let’s find new ways to be together at a distance, to fight isolation and to share resources!

“Virus”, the fiction that planned all this.

Yan Duyvendak in an interview with Tribune de Genève

Yan Duyvendak? You know, this Dutch-born stilt-walker in Geneva, where for twenty-five years he has been crossing the boundaries between reality and fiction, science and art, man and the public, debate and spectacle. As a modern Prometheus, crowned with the Swiss Grand Prix for Theatre 2019, he has searched the black holes in “7 Minutes of Terror”, investigated the Hamlet trial – with his local jury hearings – worldwide, organized “ACTIONS” for refugees or disturbed the enemy portrayals in “Still in Paradise”. On the eve of his imprisonment, he still took the faithful of the Comédie with him in a small “invisible” committee to revolutionize urban space by discreetly stirring it up. A real sorcerer’s apprentice, he developed “Virus” in two years, a scenario that Covid-19 had just caught up with.

What inspired you to undertake this crazy project?

My friend Dr Philippe Cano has been training governments in health crisis management for several years. He told me about his work in three West African countries where the European Union was predicting the outbreak of new pandemics. During the Ebola outbreak, a research team had identified the preferred response of officials. They decided to present it to the surrounding governments. The Cano experiments, based on the available studies, consisted of bringing together members of the affected governments for a half-day theoretical introduction, followed by one day of real-time simulation. Ministers, representatives of the media, government organizations, representatives of the business community and key resources or researchers then had to respond to “injections”, i.e. to information provided by the simulators. Their reactions influenced the various possible scenarios and the resulting mortality curves.

So you use your friend’s methods?

I found two very nice things. Firstly, Philippe told me that you can only reduce the damage of a pandemic if you get people to give up their specifications. If a finance minister insists on keeping his economy afloat, the pandemic becomes more and more virulent. The only way to contain the disease is to abandon his or her personal interests in order to devote himself or herself to the concerns of the community. The other thing that fascinated me was the absolute need for cooperation at all levels of society. In the face of Covid-19, the decisions on total or partial containment were taken on the same day, undoubtedly following consultations between European states. Cooperation between the authorities on the one hand and within the population on the other is necessary: the future of all depends on it. These two principles led me to create a game show whose participants would understand that their rules must be broken in order to win. Something happens in a theatrical reversal. And since, in the face of the pandemic, no one can react except with their gut, I concluded that the role of law enforcement officers, ministers or hospital directors could be distributed among each volunteer. Then I started my own cooperation with the Kaedama game developers, and they showed me that you don’t just play the role of the commander-in-chief, but that you take on the role of the general collectively. So our participants don’t play at being Alain Berset, but they take responsibility for him as a group.

Didn’t the WHO predict a pandemic before 2025?

All scientists have known for some time now that overpopulation and ease of travel increase the risk. They knew that we had to prepare for it and that we did not do enough.

How do you see the current situation?

I’m not playing this game! I’m not a Pythia, and I can’t afford one. Switzerland is currently in phase 3, with phase 4 representing the end of containment when the epidemic dies down and society has to take control again, taking into account the risks of a second wave. I have no idea when we will enter this phase.

What do you think will happen after this crisis, which will never be the same?

Everything. From top to bottom, everything will be different. We are experiencing such awareness of economic rules, of globalization, of mutual help: it is the whole relationship with others that is out of balance – and in the “other” I include nature. Together with the opponents of globalization we hoped for a slowdown. I hope that the lessons learned from Covid-19 will be enough to change the world.

And in the theatre?

I don’t know what will be left of culture after that. In economic terms, a lot of things will change. It’s too early to say how the theatre will develop.

Is the premiere of “Virus” in Switzerland still scheduled for November?

Yes, for the time being it’s on hold.

More about the project VIRUS