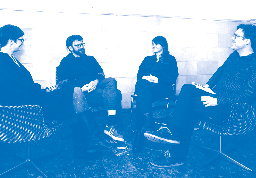 A conversation about solidarity and the future of criticism on the occasion of the Academy for Contemporary Theater Journalism From November 2019 to March 2020, the first Academy for Contemporary Theater Journalism took place on the initiative of the Alliance of International Production Houses. In Essen, Dresden and Hamburg, 20 critics* from all over Germany explored the possibilities and demands of journalism that does justice to the diverse productions and production methods of contemporary theater forms. Here, the organizers Esther Boldt (EB) and Philipp Schulte (PS) talk to two participants, the freelance author Theresa Luise Gindlstrasser (TLG) and the taz editor Jan-Paul Koopmann (JPK), about their experiences.

EB: Why did you apply to participate in the academy?

JPK: I never really have the opportunity to exchange texts with colleagues outside of a concrete assignment that are not created in a current production flow. Thinking and discussing about fundamental issues is simply not part of my everyday work.

EB: How have you perceived the academy so far, have your expectations been met?

TLG: I find the selection of participants very coherent, compliments to the jury. Very different people come together here, from different age groups and from different media – like television, radio or newspapers. The participants also hold various positions there, for example as editors, volunteers or freelancers. This is balanced on the one hand and diverse on the other – so we don’t run out of topics.

PS: Theater criticism, like writing in general, is a solitary activity. Conversations, moments of exchange are perhaps unusual beyond a certain media structure or hierarchy. Can one say so?

TGL: Yes, there is a big difference between writing on the one hand and art, theater, on the other hand, where conversation, exchange and work-in-progress are always part of the work. The concentrated reviews of our texts without production pressure that we had at the academy also distinguish them from the Theatertreffen blog, for example.

EB: There is certainly an exchange within editorial offices: at best, a discussion about the meaning and purpose of a text is held and one also receives feedback from the supervising editor.

JPK: Yes, but this is a completely different level. In an editorial conference, we don’t talk about fundamental issues. In the Academy, on the other hand, a space is opened up where we can talk about key issues: What actually is contemporary theater, what forms are there, what topics are negotiated? And what does it mean to write about theater? Such debates cannot be held in an editorial conference. When can they be?

EB: Is there a moment in the academy that you remember especially, that you perceived as special?

JKP: For me the density was special, in which we worked, in which everyone was always present. You sit in the theater until late in the evening, and at breakfast the discussion already continues, not only over days, but also over several modules.

TGL: I can think of two moments: From Essen, I remember a conversation about where the corrective sits. I believe that this question is one of the most pressing of our time – not only in terms of cultural criticism, but also very specifically politically in our democracy. And secondly, Lisa Lucassen of She She Pop, as an invited expert in Dresden, said: “What, you think that criticism is a dialogue? I have never heard that before!” I found this clash of ideas interesting!

PS: Do you see a concrete benefit of the academy beyond the idealistic value?

TLG: I think that a solidarization has taken place or an awareness of it has been awakened. If I want what I do to be perceived as an offer for dialogue, then perhaps I have to do more for it.

EB: What do you wish for the future of theater journalism?

JPK: I would like to read more about people who think about culture and who conduct a theater discourse in our newspaper without being trained journalists. So that there are other perspectives, other types of audience participating in the public discourse, besides the trained critics, who are still needed.

TLG: There is so much ego, so much Amazon, so many star ratings. If I could make a wish, it would be that criticism would slow down. Not necessarily in terms of production processes, but in terms of manners and judgements. Then criticism would be something old-fashioned in the best sense, slow, groping, something that remains critical not only of the object but also of itself.

Esther Boldt works as an author, dance and theater critic for nachtkritik.de, Theater heute and the taz, among others, as well as for Hessischer Rundfunk.

Dr. Philipp Schulte is professor for performance theory at the Norwegian Theater Academy and managing director of the Hessian Theater Academy. The theater scholar publishes on contemporary theater forms and teaches at universities in Germany and abroad.

Theresa Luise Gindlstrasser, born in 1989, lives in Vienna. She works as a freelance author and critic for nachtkritik.de, Falter, Wiener Zeitung and others.

Jan-Paul Koopmann, born 1982, works as an editor for the taz in Bremen and writes freely for nachtkritik.de and other media about culture and violence.