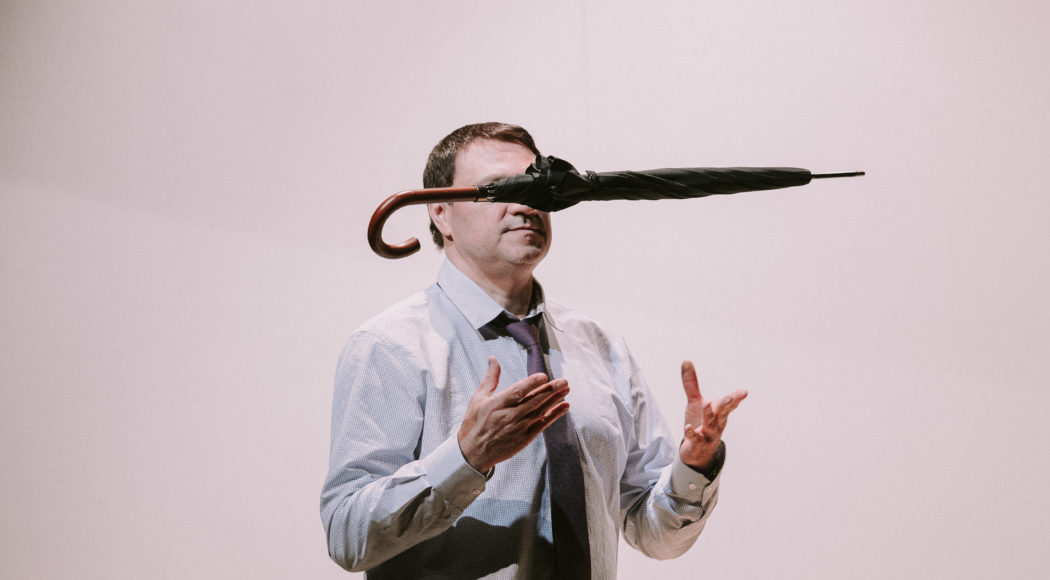 In his production, Timofey Kulyabin, one of the best-known younger Russian directors, transfers the plot of Maxim Gorky’s “Children of the Sun” to modern times – to the Russian expatriate milieu of California. What in Gorky’s play is the fear of the coming 20th century and of the revolution looming on the horizon, in Kulyabin’s play becomes the fear of the new millennium. The turn of the year 1999/2000 is approaching and with it a turning point in recent Russian history: the change from Boris Yeltsin to Vladimir Putin. For the Novosibirsk version of “Children of the Sun”, playwright Olga Fedianina has partially overwritten the text and given the characters contemporary biographies.

Pavel Fyodorovich Protasov Born in 1973 in Leningrad At the age of 12 he won a gold medal at the International Mathematical Olympiad. In 1988 he finished school externally and went to the University of Information Technologies, Mechanics and Optics. In the early 90s, he received an invitation to do an internship at Stanford University, after which he stayed in California. There he met his future wife Elena. Protasov’s parents died in St. Petersburg in 1997, and he brought his sister Liza, who survived a terrorist attack, to the US. In 1999, he received a university grant to develop a cloud storage algorithm.

Elena Nikolaevna Protasova Born in Moscow in 1974 Her father was a diplomat and her mother a fashion designer at the All-Union House of Fashion. In the mid-80s her family moved to Los Angeles, her parents soon divorced and Elena decided to stay with her father. She went to Stanford University, studied biology and was awarded the title “Miss Stanford” in 1995. She earned a bachelor’s degree in science and married Pavel Protasov the same year. As Pavel became more and more engrossed in his work, Elena slowly turned away from her scientific career.

Lisa, or Elizaveta Fedorovna Protasova Born in Leningrad in 1970 She entered the Leningrad State Institute of Theatre, Music and Cinematography in 1991. She then graduated from the Faculty of Drama in 1995. On 11 June 1996, she was in the Moscow metro at Tulskaya station where an improvised explosive device was detonated. As a result of the terrorist attack, she suffered a hip injury. In November 1996, she was taken to Psychiatric Hospital No. 7 in St. Petersburg with a diagnosis of post-traumatic stress disorder, where she stayed for almost a year. After her parents died in 1997, Pavel brought her to live with him at Stanford.

Boris Nikolaevich Chepurnoy Born in 1958 in the town of Oboyan, Kursk Region He graduated from school in 1975 with a silver medal and entered the First Moscow State Medical University. He was an assistant at the university from 1981. In 1988, under the bilateral agreement between the USA and the USSR, he was invited to the United States for an internship. Boris participated in the “Space without Borders” programme and in the development of a biomedical system for NASA. After the programme was completed, he decided to stay in California and get a job as an assistant professor at Stanford Medical College. In California, he met his half-sister Melaniya, the illegitimate daughter of her father.

Melaniya Kirpicheva Born in Yaroslavl in 1977 after an affair between her mother and engineer Nikolay Chepurnoy Melaniya was four years old when she lost her mother. She grew up in her uncle’s family in a village in the Yaroslavl region. She graduated from high school there. In the early 1990s, she lived with a criminal. After his death, she moved to Moscow and worked in an escort agency. There she dated a 70-year-old Texas multimillionaire who owned a network of gas stations and roadside restaurants. She married him and moved to California. There she met her half-brother Boris, whom she had never met in Russia. After her husband’s death in 1998, she won the inheritance case and became the owner of the family business.

Dmitriy Sergeyevich Vagin Born in 1964 His birth name is Dietrich Wagen. He grew up in the GDR in a Russian-German family. In 1978, the family moved to West Berlin. After school, Dietrich was looking for adventures: he lived in different countries, worked as a waiter, model, packer, fundraiser. Then he stayed in the USA and began studying at Stanford, where he met Protasov. Soon he gave up studying exact sciences, changed cities and faculties and got a master’s degree at the Institute of Fine Arts at New York University. He works successfully as a designer and fashion photographer. In the autumn of 1999 he was invited to teach a course on modern art at the Stanford School of Design, where he again met Pavel Protasov and Elena.

Fima Born in 1974 in Vyborg, Leningrad Region She graduated from the Leningrad Medical School. After her mother died in the early 1990s, she moved to the United States, where her aunt had previously emigrated. She got a job as a cleaner on the campus of Stanford University. In the evenings she earns money as a waitress in a bar.